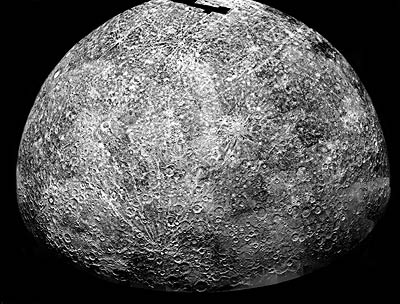 Mercury is the first planet from the Sun. It is not very easy to observe since it is always close to the Sun in the sky. Even when best placed, it is close to the horizon and only visible for a few hours after sunset or before sunrise.

Named after the winged messenger of the gods, the planet speeds around the Sun once every 88 days. However, it spins on its axis very slowly – once every 58.6 days. This is exactly two thirds of its orbital period.

Mercury is a small, rocky world. It is only about as wide as the Atlantic Ocean and 18 Mercurys would fit inside the Earth.

Mercury is very like the Moon. Its surface is covered with impact craters. It has no atmosphere and no water. The noon temperature at the equator can soar to 450°C but the nights are extremely cold, below -180°C. There may be some water ice in the deep, dark craters near the poles.

Mercury is surprisingly dense. It is thought to have a large iron core that fills most of Mercury’s interior. It also has a surprisingly strong magnetic field.

So far, less than half of the surface has been imaged at close range by the Mariner 10 spacecraft. ESA and Japan are planning to send two orbiter spacecraft to Mercury in 2013. The BepiColombo mission is named after a famous Italian mathematician and scientist.