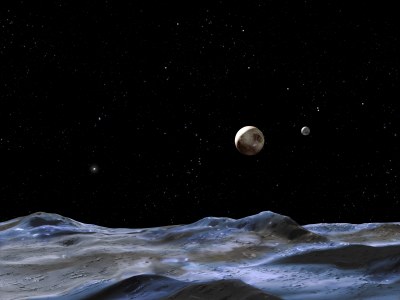 Pluto was discovered in 1930 by 24 year-old Clyde Tombaugh, who was using a special machine to compare photos of the sky. It turned out to be a tiny world, even smaller than our Moon.

Very little is known about Pluto. Its surface is extremely cold (-230 degrees C) and seems to be covered with frozen ices. In recent years it has been fairly close to the Sun and enjoying a brief summer. Surface ices have vaporised, producing a thin atmosphere. However, it is now retreating into the cold depths of the Solar System and this atmosphere will soon freeze again.

Pluto spins “backwards” (east to west) once every 6 days 9 hours. Its largest moon, Charon, takes the same length of time to orbit Pluto. This means that anyone living on one side of Pluto would never see Charon. Two smaller moons have recently been discovered with the Hubble Space Telescope.

For many years, Pluto was accepted as the ninth planet from the Sun (even though it sometimes comes closer than Neptune). Today, it is regarded as a “ dwarf planet”. It is also one of the largest members of the Kuiper Belt, a family of icy worlds that occupy the space beyond Neptune.