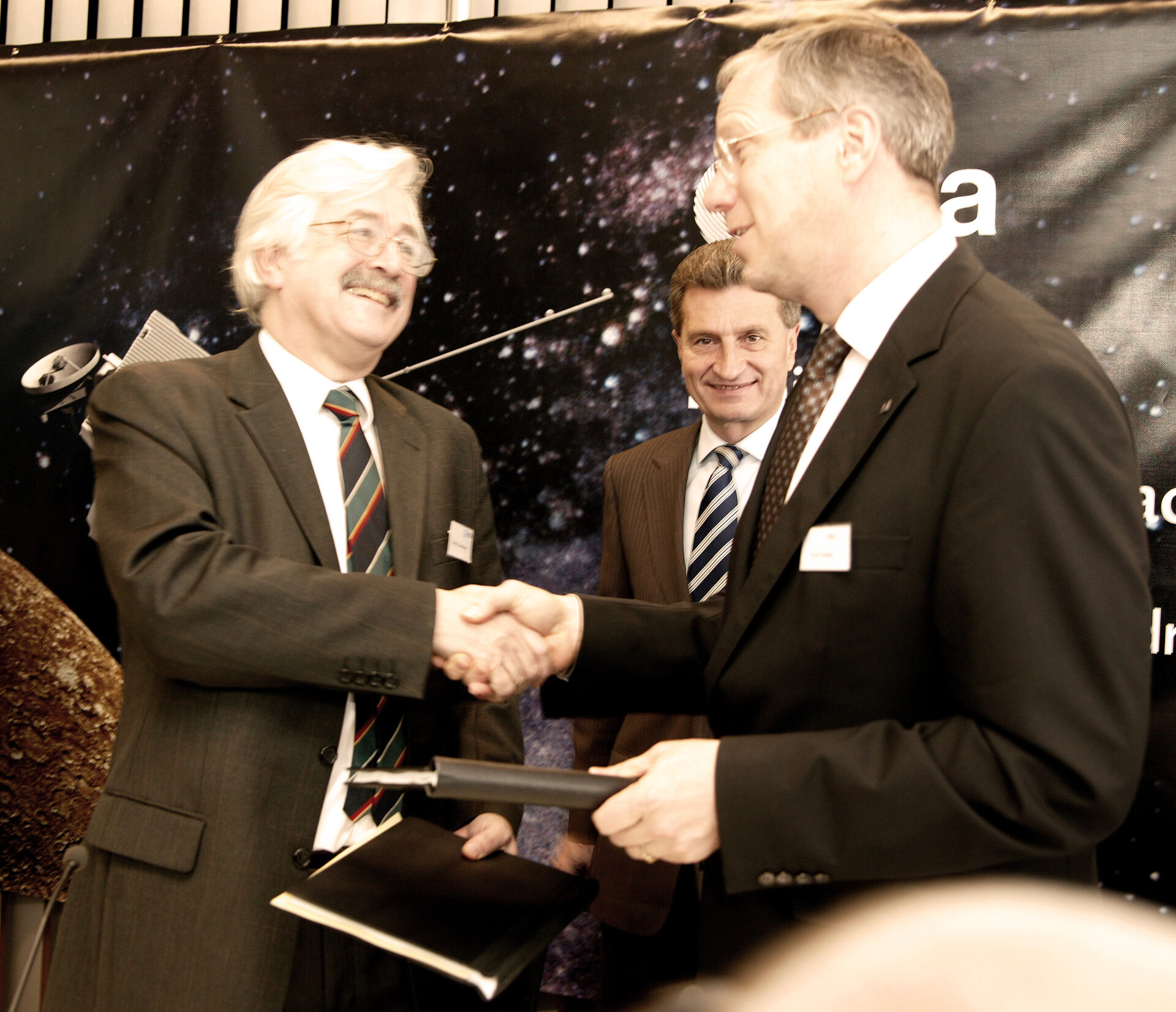 The industrial development of BepiColombo, Europe’s first mission to Mercury, has been officially kicked off. The prime contract, awarded by ESA to Astrium, was signed today during a ceremony that took place in Friedrichshafen, Germany.

BepiColombo, a mission to make the most comprehensive study of Mercury ever, was selected by ESA as one of its cornerstone missions in October 2000. Since then, several industrial studies have been performed and their assessment led to the selection of Astrium as prime contractor in 2006.

BepiColombo is due for launch in August 2013, and will reach Mercury in 2019 after a six-year journey towards the inner Solar System. It is the first dual mission to Mercury, with one European spacecraft and one provided from Japan. The programme is carried out as a joint mission under ESA leadership with the Japanese Aerospace Exploration Agency (JAXA).

“The two spacecraft will address scientific questions such as the origin and evolution of a planet close to its parent star, the status of the planet’s interior and of its magnetic field, as well as a test of Einstein’s theory of General Relativity,” said Johannes Benkhoff, ESA Project Scientist for BepiColombo.

One spacecraft, ESA’s Mercury Planetary Orbiter (MPO), will carry 11 instruments to study the surface and internal composition of the planet with unprecedented accuracy, using different wavelengths and investigation techniques.

The second spacecraft, JAXA’s Mercury Magnetospheric Orbiter (MMO), will carry five instruments to study the planet’s magnetosphere, that is the region of space around the planet that is dominated by its magnetic field.

On behalf of ESA, Astrium will lead a network of subcontractors to design and build ESA’s MPO spacecraft and the so-called Mercury Transfer Module - that is the module to carry the MPO-MMO composite spacecraft to its destination.

“Astrium will have to address several technical challenges,” added Jan van Casteren, ESA’s BepiColombo Project Manager. “They mostly derive from the difficulty of operating a spacecraft in the harsh environment of a planet so close to the Sun, where the radiation is about ten times more intense than in Earth’s proximity.”

An additional difficulty is that reaching Mercury and then entering into orbit requires a large amount of energy to brake against the Sun’s gravity. To achieve this, the cruise and the orbit insertion phases will primarily rely on solar-electric propulsion, complemented by several planetary gravity-assist manoeuvres and conventional (chemical) propulsion.

To achieve the best science, the Mercury Planetary Orbiter will operate facing down the planet with its instruments, something never tried before at Mercury due to the intense heat coming from the surface. It will also feature the highest data rate capacity ever used at Mercury, returning a high-volume of high-quality data to Earth, for the maximum scientific return. All these technical challenges are reflected in the spacecraft design.

Astrium is already consolidating the design itself, ready for the preliminary design review to take place in late spring, after which the actual building of the spacecraft will start. In the meantime, the subcontractors are being selected for the procurement of the equipment and units needed to build the spacecraft. This procurement phase will continue throughout 2008.

The cost of BepiColombo to ESA is 665 million Euros, including the launch and the operations up to 2020. The contract to Astrium is for 350.9 million Euros. The cost of the MPO instruments, funded by European institutes, is over 200 million Euros.

“Mercury is the planet closest the Sun, making it hard to get to and so it is a technical challenge by anyone’s measure,” said Prof. David Southwood, ESA’s Director of Science. “However Mercury has also regularly confounded planetary scientists with its exceptional properties and that makes it a grand scientific challenge.”

Astrium’s subcontracting companies include: the Italian branch of Thales Alenia Space Italy, which will be the co-prime contractor for the development of the MPO’s electrical power, thermal control and communications systems and for the integration and test activities; Astrium Ltd (UK), co-prime contractor for the electrical and chemical propulsion system as well as for the complete composite spacecraft structure and Astrium (France), which will develop the on-board software.

BepiColombo will be launched from the European Spaceport in Kourou, French Guiana, on board a Soyuz-Fregat 2-1B rocket provided through Arianespace.