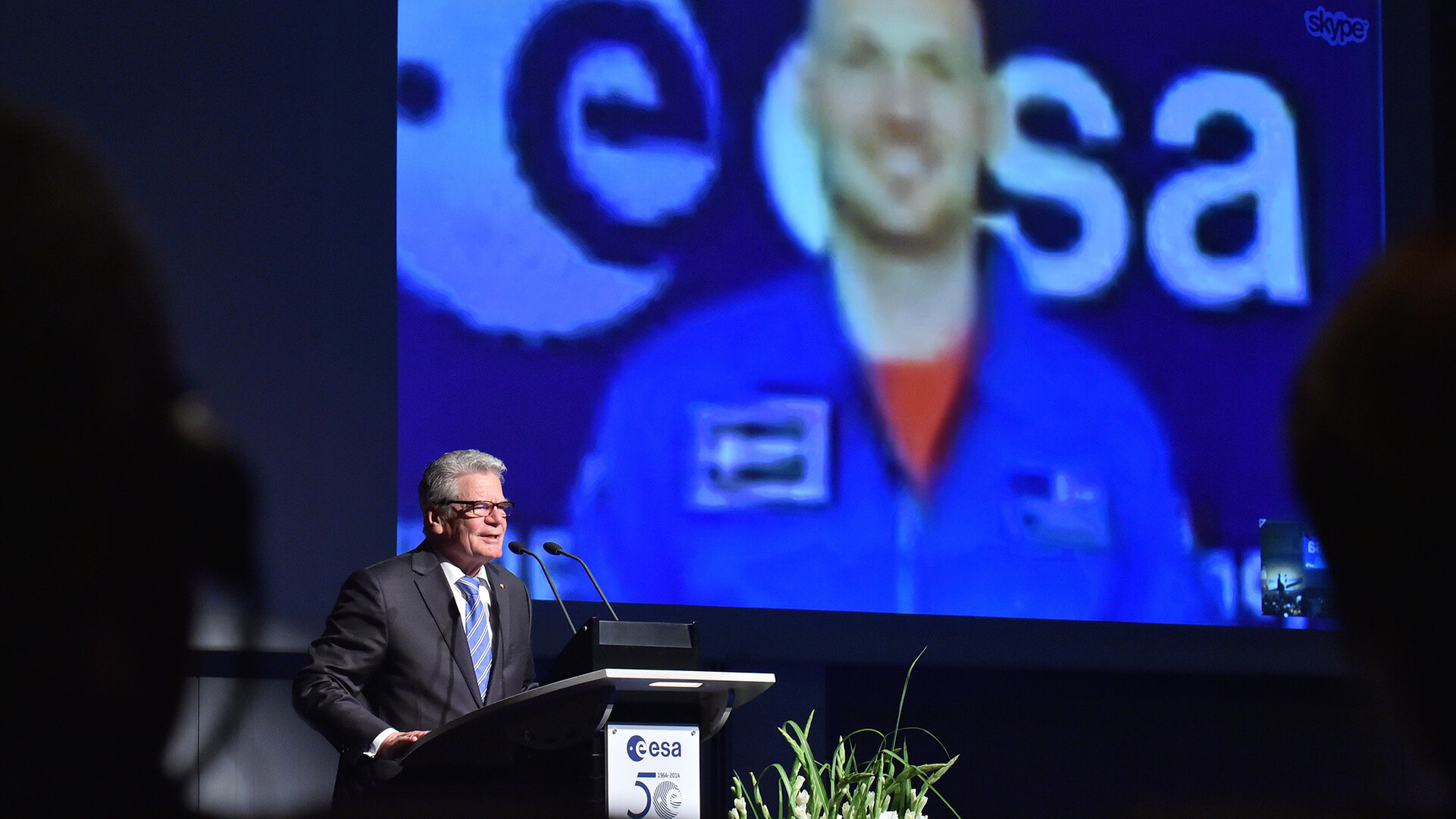 Today, President Joachim Gauck made the first-ever visit by a Head of State to ESA’s operations centre in Darmstadt, Germany. He was joined by 140 ambassadors and Tarek Al-Wazir, the Deputy Prime Minister of the Hesse region, for a guided visit through the centre’s mission control facilities.

President Gauck and his party were welcomed by ESA Director General Jean-Jacques Dordain and by Thomas Reiter, ESA Director of Human Spaceflight and Operations and Head of the European Space Operations Centre, ESOC.

“We are very pleased and honoured that the president and diplomatic corps have visited ESA at its operations centre,” said Director General Dordain.

“It was a unique occasion to explain to the distinguished guests that our space missions and applications help foster cooperation and innovation in Europe – two pillars of progress and growth for all citizens.

“The powerful role of ESA in the creation of future-oriented high-tech jobs and the inspiration our programmes give to a young generation of scientists and engineers became evident to our visitors.”

The visitors were briefed by Director Reiter on the current high pace of Agency activities, including astronaut Alexander Gerst’s ‘Blue Dot’ scientific mission to the International Space Station and the operations of exploration and Earth monitoring satellites.

The briefing highlighted Rosetta, which is operated from ESOC and due to arrive at its comet destination in August, 404 million km from Earth.

“This centre is a lively example showing why we need Europe. None of the European countries alone are strong enough to realise such tremendous research projects,” said President Gauck.

Addressing ESA astronaut Alexander Gerst, he added: “I believe that you are a role model who demonstrates to young people in Germany and Europe the beauty of believing in technological and scientific progress.”

President Gauck was guided on a tour of the mission control facilities, from which 15 spacecraft are currently operated, with more than 20 new missions under preparation. Experts from two dozen nations work as part of an innovative ‘team of teams’ to help achieve Europe’s goals in space.

The President had an opportunity to view live signals from Europe’s comet chaser, Rosetta, and he spoke in a video call with Alexander Gerst, at the Baikonur cosmodrome preparing to lift off on Wednesday for six-months on the Space Station.

The visit took place as part of a guided tour to Hesse conducted by the regional government and led by Mr Al-Wazir.

The presidential visit highlights the role of ESOC as Europe’s ‘Gateway to Space’. Its highly developed infrastructure, technologies and specialised teams enable it to operate simultaneously over a dozen spacecraft, plus conduct critical launch and early orbit activities for ESA and other agencies.

In its 47-year history, it has supported more than 100 satellite missions and is a globally recognised centre of competence for flight dynamics, ground stations, software development, space debris studies and satellite navigation.