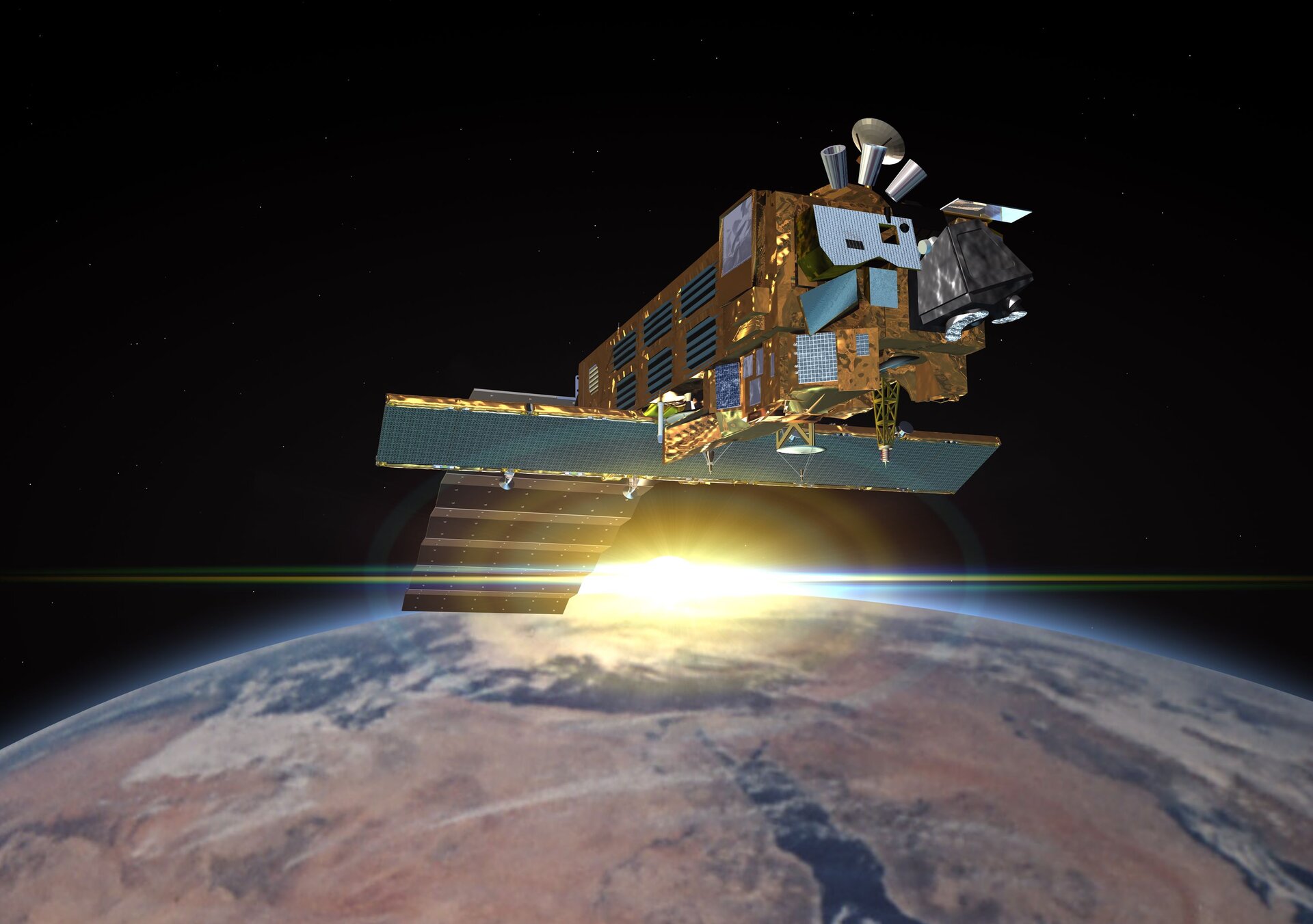 ESA INFO 2-2002. From its vantagepoint in sun-synchronous orbit, the European Space Agency's new spacecraft Envisat, whose launch is scheduled end of February 2002, will tirelessly sweep the Earth's surface and atmosphere, using a suite of ten different scientific instruments.

Over a 35-day cycle, the satellite's orbit will cover the entire planet, and then start all over again. Two thirds of the time it will be over water. Because of the sheer size of the oceanic currents, the complexity of thermal exchanges, and ocean-atmosphere coupling, the ocean is a crucial factor in explaining the way our planet's climate operates and how it is changing.

Beginning with the first brief American Seasat mission in 1978, satellite observation has created a revolution in our understanding of how the ocean behaves. Since the 1990s, a continuous stream of scientific data has been flowing from ESA's ERS satellites and the joint French-US Topex/Poseidon altimetry satellite. This first generation is now being succeeded by Envisat's instruments designed not only to advance science but also to lead to a range of operational applications services.

The data obtained with a radar altimeter, RA-2, will ensure continuity with the original RA system on the ERS satellites. It will also provide a valuable complement to Topex/Poseidon and its follow-on, the small satellite Jason, launched on 7 December 2001. The two systems provide altimetric observation of the ocean from different orbits. A low satellite repetition ensures that Envisat, like the ERS spacecraft before it, obtains excellent spatial resolution, needed to study complex phenomena like eddies and describe the distribution of water mass with precision. Topex/Poseidon and Jason, on the other hand, with a repetitivity of just ten days, will provide better temporal resolution.

CLS, a French company, is handling the operational exploitation of altimetry measurements from both Envisat and Jason. "We will integrate data from these two sources, to get the maximum benefit," explains Philippe Gaspar, Head of satellite oceanography at CLS. "The combinatorial algorithm has been in use since 1998, allowing CLS to offer state-of-the-art data products".

The products developed by CLS will be of interest, first and foremost, for scientists who use them as inputs for ocean modelling and forecasting. In conjunction with atmospheric models, this forms a starting point for predicting climate change. "It is now possible to forecast some major events such as El Niño, but smaller-scale phenomena such as the North Atlantic oscillation pose much more of a problem," Gaspar said.

To obtain the best performance from a forecasting model, initial conditions must be described as precisely as possible, and this is where satellite data is indispensable. "Before the advent of satellites, forecasting of this type would have been unthinkable," as Gaspar reminds us.

Radar altimetry measurements are correlated with high-precision orbitographical data from an instrument called "DORIS", and with those of a microwave radiometer, so that errors caused by atmospheric water can be corrected. The use of a dual-frequency altimeter further makes it possible to correct for the distorting effects of the ionosphere. In this way two significant sources of error are eliminated, in the order of 40 to 50 cm for water vapour and 20 to 30 cm for the ionosphere.

The continuity of altimetry data is vital, as Gaspar explains. "The usefulness of the scientific work would be seriously impaired if the service was interrupted. And once commercial applications are on the market, continuity will become absolutely indispensable."

Managing the traffic at sea

In addition to oceanography and climate studies, the radar altimeter has an important contribution to make to marine traffic management. Dispersion of the reflected radar signal gives information on the height of waves, with a precision of ±25 cm, while the advanced synthetic aperture radar (ASAR) determines wave direction. Taken together with information on major currents, this will make it possible to optimise routing of maritime traffic for speed and fuel economy, a substantial boon to international shipping. The ASAR also tracks drifting ice and monitors the pack ice and its limits.

Two other Envisat instruments are designed primarily to study the hydrosphere. MERIS (for Medium Resolution Imaging Spectrometer) is a fifteen-band optical system spanning the visible and near-infrared spectrum, and will be used for ocean colour measurements. The AATSR radiometer covers more of the IR spectrum. It will measure ocean surface temperatures, continuing the work of earlier ATSR systems on the ERS satellites. These two instruments together will have major applications in studies of plankton and fish movements.

As instrument data comes in, Envisat puts it provisionally into its onboard mass-memory devices. Transmission may be to one of the ground stations in Kiruna, Sweden, or Svalbard, Norway or via a high-speed link to the Artemis data relay satellite, which will be positioned in geostationary orbit and forward the data to ESA's establishment ESRIN, located in Frascati, Italy, for near-real time processing.

The data gathered will be made available to the world scientific community at archiving centres distributed throughout Europe and linked with very high speed leased lines. A data server will be put on line for access via the Internet. Two consortiums have been set up with data processing/commercialisation experts: Sarcom, led by Spot Image, and Emma, by Eurimage, will handle the commercial exploitation of the application products developed from Envisat data.

By concentrating such an array of instruments on a single orbital platform, it becomes possible to integrate the information received in near-real time. This opens exciting opportunities for new products, building on recent progress in our understanding of the mechanisms, which determine the behaviour of the Earth's oceans and atmosphere. Thanks to a continuous flow of data, these products could revolutionise the management of our Planet and our environment.