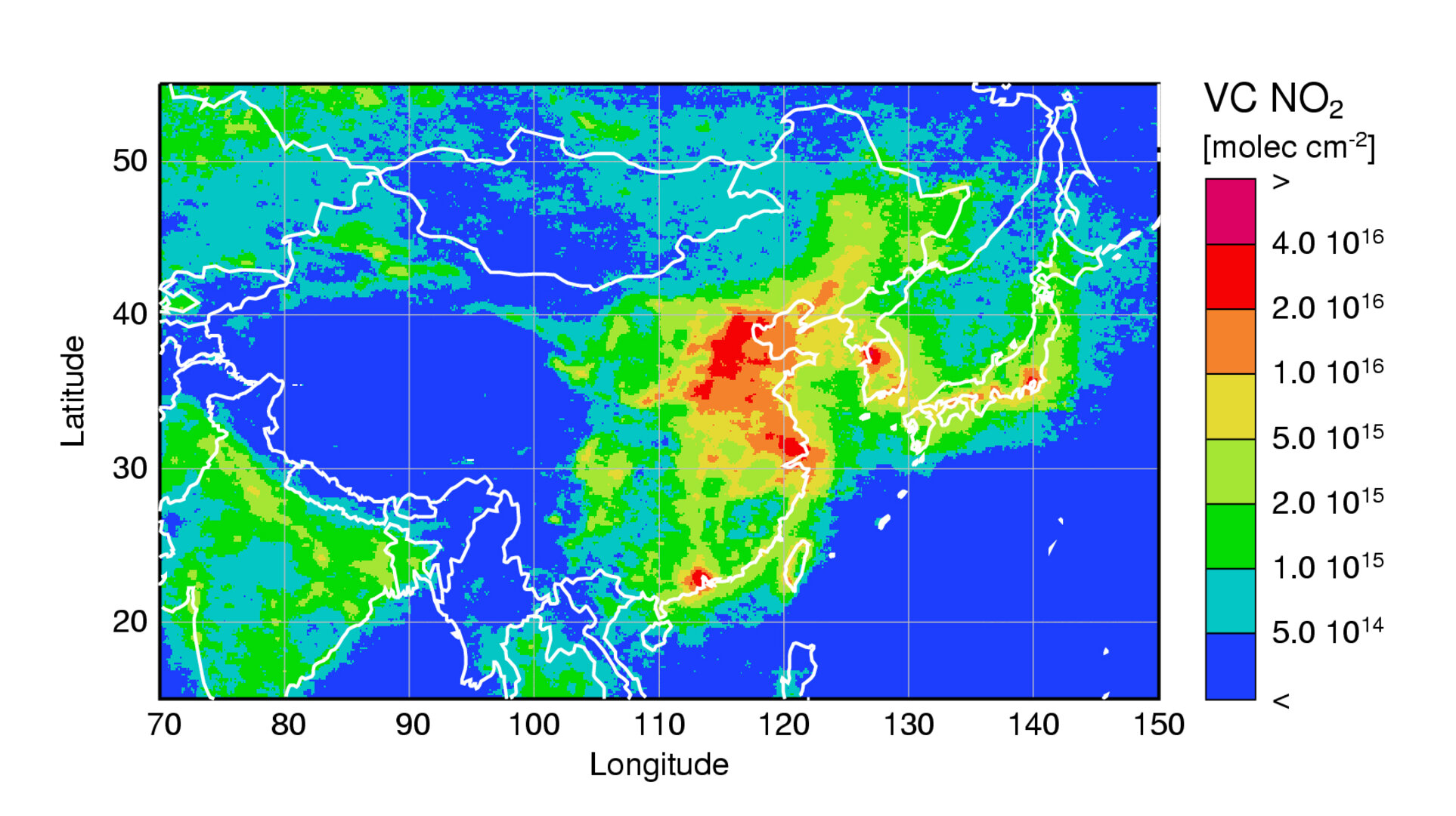 China's spectacular economic growth during the last decade has brought many benefits – and some challenges. Global atmospheric mapping of nitrogen dioxide pollution performed by ERS-2's GOME and Envisat's SCIAMACHY reveals the world's largest amount of NO2 hanging above Beijing and northeast China, as reported in Nature this week.

As part of ESA's Dragon Programme, European and Chinese researchers are using results returned from the Global Ozone Mapping Experiment (GOME) on ERS-2 and the Scanning Imaging Absorption Spectrometer for Atmospheric Chartography (SCIAMACHY) on Envisat to monitor and forecast Chinese air quality.

In this context, researchers at the University of Bremen, the Max-Planck Institute of Meteorology in Hamburg and France's Centre National de la Recherche Scientifique (CNRS) have been studying the retrieval of nitrogen dioxide variability from space and modelling its global behaviour.

The team have published an article in the 1 September 2005 edition of the science journal Nature about the global changes in nitrogen dioxide observed in the last decade from space and highlighted the dramatic changes over China.

Nitrogen dioxide (NO2) is associated with nitrogen oxide (NO) in the atmosphere and the sum of the two is called NOX. This is released into the troposphere from power plants, heavy industry and road transport, along with biomass burning, lightning in the atmosphere and microbial activity in the soil. The emission of nitrogen oxides has increased about six-fold since pre-industrial times and in cities above a thousand times more NOX is present than in the pristine and remote marine boundary layer.

Exposure to nitrogen dioxide in large quantities is known to cause lung damage and respiratory problems, although little is known about the consequences of long term exposure to elevated atmospheric amounts. The presence of this gas is a significant driver of the production of low-level ozone, which, within the troposphere (the lowest part of the atmosphere, extending eight to 16 kilometres in height) is itself a harmful toxic pollutant, a major ingredient of photochemical smog.

"While nitrogen dioxide vertical column concentrations above central and eastern Europe and parts of the East Coast of the United States have been either static or exhibiting a small decrease, there is a clear and significant increase over China," explains John Burrows of the University of Bremen's Institute of Environmental Physics, SCIAMACHY's Principal Investigator.

"Before SCIAMACHY was flying we previously retrieved NO2 data from its precursor instrument, GOME on ESA's ERS-2 mission. Although GOME had lower resolution, the article shows that China's nitrogen dioxide retrievals from the two instruments overlap seamlessly.

"What the combined data show are that nitrogen dioxide levels have risen by around 50% since 1996, and this behaviour is continuing."

Space-based sensors are the only way to carry out effective global and regional monitoring of the atmosphere. While GOME demonstrated the first satellite sensitivity to tropospheric nitrogen dioxide, SCIAMACHY possesses superior performance, with a spatial resolution of 60 x 30 kilometres compared to 320 x 40 km for its predecessor.

SCIAMACHY also observes the atmosphere in two different ways – downwards or nadir-sounding' as well as 'limb-sounding' along the direction of flight – and with a larger spectral range than its predecessor.

The increase in nitrogen dioxide levels seen is an unfortunate side effect of economic success. China's industrial boom has seen it become the world's largest consumer of copper, aluminium and cement and the second bigger importer of oil. Car ownership within the country has been doubling every few years.

"China's nitrogen dioxide concentration varies according to season," Burrows adds. "There is more in the winter as a result of differing emission patterns and meteorology. For example more fuel is burned for heating and nitrogen dioxide persists longer in the atmosphere at that less sunny time of year – lasting around a day rather than hours, as in the summer.

"Meteorology also plays a role. There is a peak before Christmas: this is not because industrial activity, domestic heating or transportation is suddenly reduced after the holiday season but because there is an eastward outflow of air that was previously revolving around Asia. This is the same type of phenomenon that carries dust from the Gobi Desert across to the West Coast of the US."

China is reliant on coal to meet 75% of its national energy needs, and that means high levels of another atmospheric pollutant called sulphur dioxide (SO2) also detectable by SCIAMACHY. Large SO2 sources over China that overlap with nitrogen dioxide plumes are linked to power plants. Further to the west there is also sulphur dioxide produced from smouldering underground coal seam fires.

Burrows is the scientist who – supported by an international team – proposed both GOME and SCIAMACHY to national space agencies and ESA in the first place. He explained that the two instruments were originally chosen to fly because of their ability to measure stratospheric ozone, but were also selected in order to investigate the amount of useful information that could be retrieved from the troposphere.

"The instruments are now being used to monitor a significant number of key tropospheric trace gases including formaldehyde, methane, sulphur dioxide and carbon monoxide and dioxide," Burrows remembers. "Back when we were starting out, many people thought it would be impossible to get any useful results out of the troposphere. There are many important issues to deal with, such as cloud cover and the highly variable reflectivity of the surface, as well as having the absorption or emission of stratospheric and upper atmospheric species situated between the troposphere and the instrument.

"First with GOME and now much better with SCIAMACHY we are demonstrating it can be done. The success so far is an important step on the way to establishing an operational global observing system for the Earth's atmosphere. This is something we need as we enter the geological age of the Anthropocene, where the activities of mankind and its interactions with natural phenomena are the driving force in global climate change.

"Next we are hoping for follow-up satellite missions, in particular from geostationary orbit to monitor atmospheric pollution, which has a strong diurnal variation and thereby determine objectively the changing atmospheric composition."

SCIAMACHY is a spectrometer, and it works by measuring sunlight – either transmitted, reflected or scattered by the Earth's atmosphere or surface in the ultraviolet, visible and near infrared regions. Mathematical inversion of these data yields the amounts and distribution of trace gases, ozone and related chemicals, clouds and dust particles throughout the atmosphere. With a 960-km swath and alternate limb and nadir observations, SCIAMACHY covers the entire world every six days at the equator and more often at high latitudes.

SCIAMACHY is part of a family of atmospheric sounders that also includes GOME on ERS-2 and also the forthcoming GOME-2 instrument due to launch next year aboard ESA's and EUMETSAT's first MetOp spacecraft.

The Dragon Programme is a joint undertaking between ESA, the Ministry of Science and Technology (MOST) of China and the National Remote Sensing Centre of China (NRSCC). Its purpose is to encourage increased exploitation of ESA space resources within China as well as stimulate increased scientific co-operation in the field of Earth Observation science and applications between China and Europe.