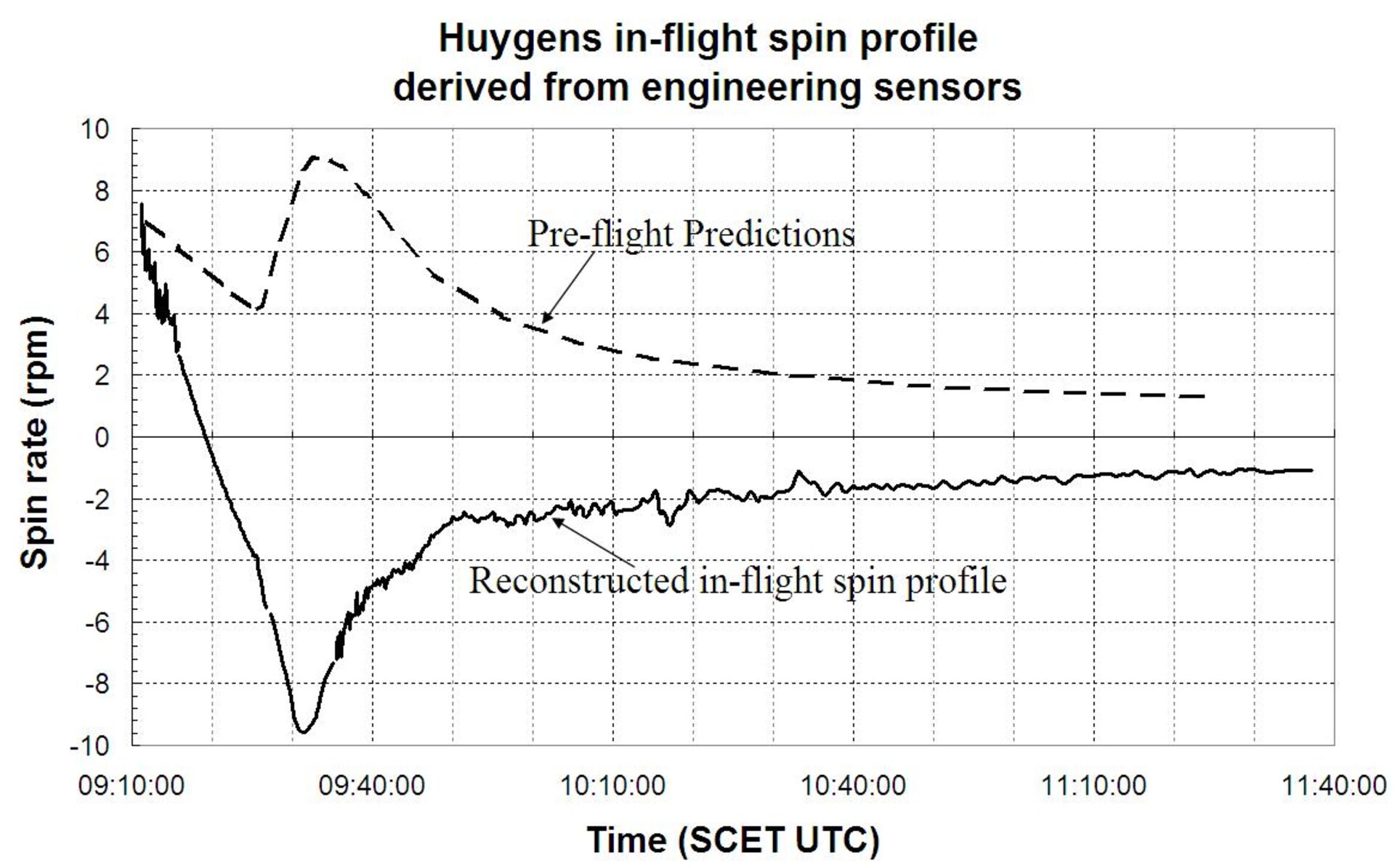 This graph shows the ‘spin profile’ of ESA’s Huygens probe as it descended to the surface of the Saturnian moon Titan on 14 January 2005: the dotted line shows the predicted profile, while the solid line shows the actual profile as tracked by the probe’s onboard engineering sensors. The horizontal axis indicates UTC time and the vertical axis the spin rate (in revolutions per minute).

As part of the international Cassini mission, Huygens made history when it became the first probe to successfully land on another world in the outer Solar System. However, during its descent, the probe began spinning the ‘wrong’ way – as this graph illustrates. Huygens was released from the Cassini orbiter spinning anti-clockwise at a rate of 7.5 rotations per minute. This direction of spin was intended to continue throughout the descent, with the spin rate controlled and influenced by the deployment of landing parachutes.

Although Huygens initially behaved as anticipated, the probe’s spin rate decreased far more rapidly than expected, before reversing after approximately 10 minutes to adopt a clockwise direction (as shown by the solid black line visible here, which decreases rapidly and then dips below 0 to adopt a ‘negative’ – or, in this case, clockwise – value). It kept spinning this way for the remaining 2 hours and 15 hours of descent; luckily, the magnitude of this reversed spin was similar to that expected by the researchers, meaning that the unexpected flip affected the timing of the planned observations, but did not dramatically affect their quality.

Recent tests confirm the cause of this flip in spin direction. While the probe was equipped with vanes to regulate its spin, other appendages on the spacecraft produced a torque in the opposite direction; this was only exacerbated by the way in which these vanes redirected the gas flow around the body of the probe, so that an overall ‘negative’, or clockwise, spin effect was created. There are also indications that the booms of the Huygens Atmospheric Structure Instrument (HASI) might have not been fully or symmetrically deployed during descent – and this effect is under further investigation.