A brief overview of mission operations at ESA.

Scroll down to read questions and answers and review our quick facts.

We are the people working as staff, contractors and support personnel within ESA's Operations directorate to control spacecraft and develop and manage the related ground infrastructure.

We operate satellites from ESOC, ESA's European Space Operations Centre, in Darmstadt, Germany. We also operate the Proba-series of missions from ESEC, ESA's European space Security and Education Centre, at Redu in Belgium.

We represent dozens of nationalities from across Europe and around the world, and comprise specialists from a wide variety of scientific, engineering and managerial disciplines.

We work as a single team to plan, build and manage ground segments for ESA missions, and then we operate spacecraft from our control rooms using a sophisticated and standardised array of mission control hardware and software. We also provide a range of expert services to customers both inside ESA and at other organisations.

We operate spacecraft orbiting near Earth, at the Sun-Earth Lagrange points or voyaging deep in our Solar System. Missions can comprise a single spacecraft, Mars Express, or, like Swarm and Cluster, multiple satellites operated in tight coordination to boost scientific value. Access Current and future missions for a detailed list.

Note that ESA operates, participates in or partners with a number of other missions that are not controlled by the Agency's Operations team. For example, the joint ESA/NASA SOHO and Hubble missions are operated by NASA, and the SMOS mission is operated by CNES (ESA is responsible for payload operations from ESA/ESAC). In future, the joint NASA-ESA-CSA James Webb Space Telescope will be operated by NASA, but launched by ESA.

Prior to launch, teams carefully design and build mission ‘ground segments’ – the hardware and systems on Earth that enable engineers to control satellites in space and receive and distribute precious data to scientists. Access Current and future missions for a detailed list.

At ESOC, our primary location, we have about 800 workers, comprising some 250 permanent staff and about 550 contractors. Additionally, approximately 50 work at other ESA establishments, Estrack ground stations and at partner facilities in several countries.

Although personnel from ESA's Operations team are located at several ESA establishments and partner organisations, the 'home base' for our activities is ESOC, ESA's European Space Operations Centre, in Darmstadt, Germany. 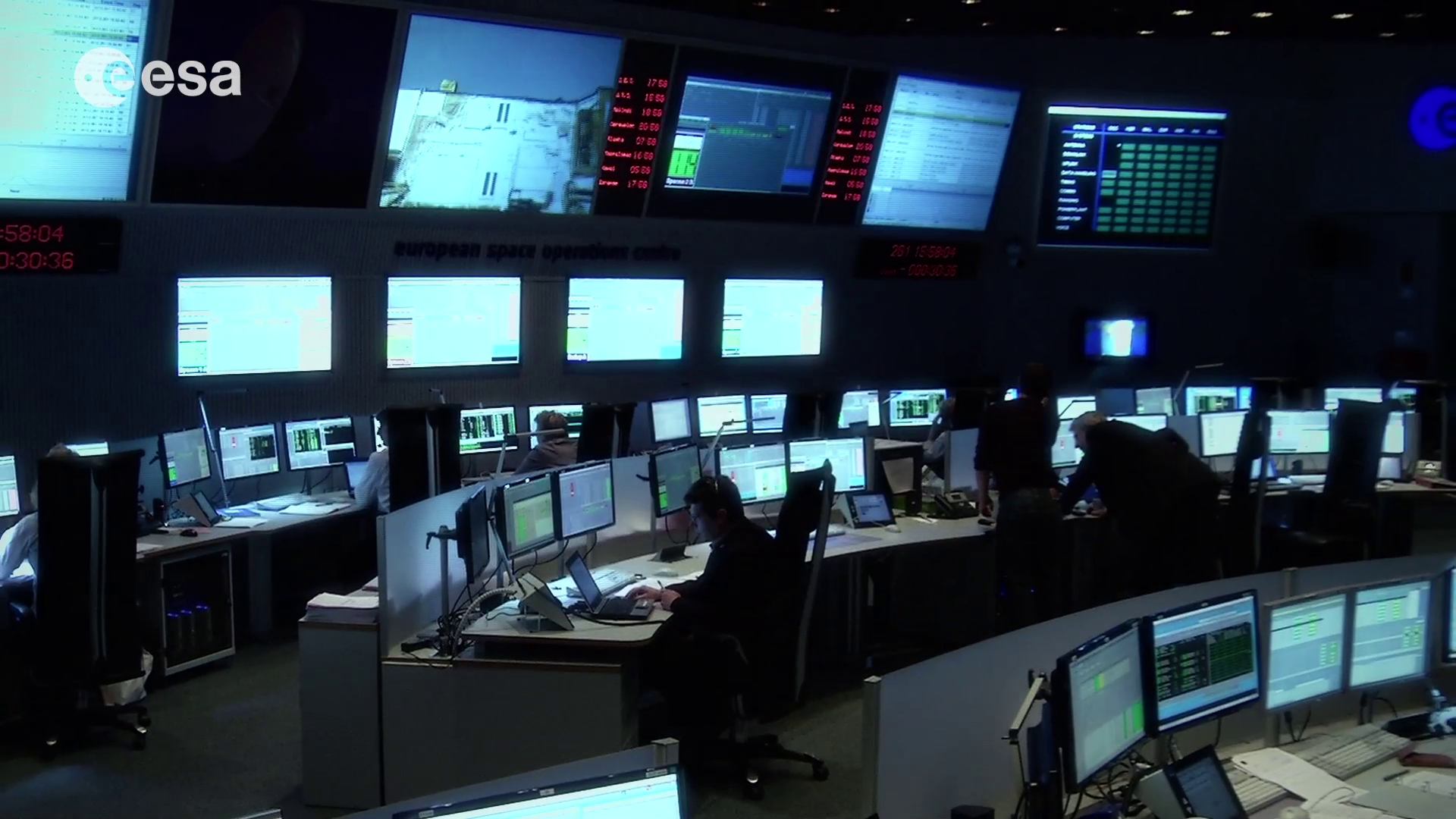 In addition to operating ESA missions, we provide services to a variety of internal and external clients for launch and LEOP, space debris tracking and collision alerts, geodata analysis, software development, navigation and much more.

LEOP refers to the 'launch and early orbit phase', the critical first steps in a spacecraft's life starting after the satellite separates from the launcher's upper-most stage.

During LEOP, the mission control team works 24 hours/day to activate, monitor and verify various subsystems on board the satellite, ensure that the solar panels have deployed and undertake critical orbit and attitude control manoeuvres. If anything can go wrong, it's most likely to happen during LEOP.

Up to a half dozen ground stations operated by ESA or by partner networks are called in to support communications during LEOP, providing extra telecommanding ‘passes’, time slots when the satellite is in view of a station. This provides mission controllers extra flexibility when complex command stacks must be sent up or additional software must be uploaded to troubleshoot any problems that may be found.

LEOP is also the first time that the mission operations team get to work with the satellite in the real environment of space; despite the best preparations, unforeseen problems and challenges often arise that must be solved in real time by teams working and thinking on their feet.

We are one of Europe's most experienced providers of LEOP expertise; we are also called upon to conduct satellite recovery operations, and have successfully recovered a number of satellites that have spun out of control, suffered system failures or whose boosters under performed.

Q4: What are the core activities related to Operations?

Q5: Do you work with other organisations?

Yes! We have a long history of beneficial cooperation with space agencies and organisations worldwide. We regularly cooperate with the American, German, French, Italian, Russian, Japanese, Chinese and other space agencies – as well as European organisations like Eumetsat, Eutelsat and the Galileo GNSS Agency – to plan, manage and control multiple missions. We also share tracking station facilities and telecommunication links.

This positive and cost-effective technical and operational cooperation will continue in the future.

We work closely with European industry to advance the state of European technology in the areas of spacecraft operation, ground system engineering and communications. This is done by placing contracts for studies, research and development, and by transferring the knowledge and experience we've gained to industry. We have a substantial base of strategic assets and a depth of expertise that has benefited many partners.

We also cooperate with cesah (Centre for Satellite Navigation in Hessen GmbH), a unique business incubator located in Darmstadt and host to ESA's Business Incubation Centre Darmstadt. cesah fosters commercial applications based on navigation data to be supplied by the Galileo project, Europe's global satellite navigation system, and other navigation systems like GPS.