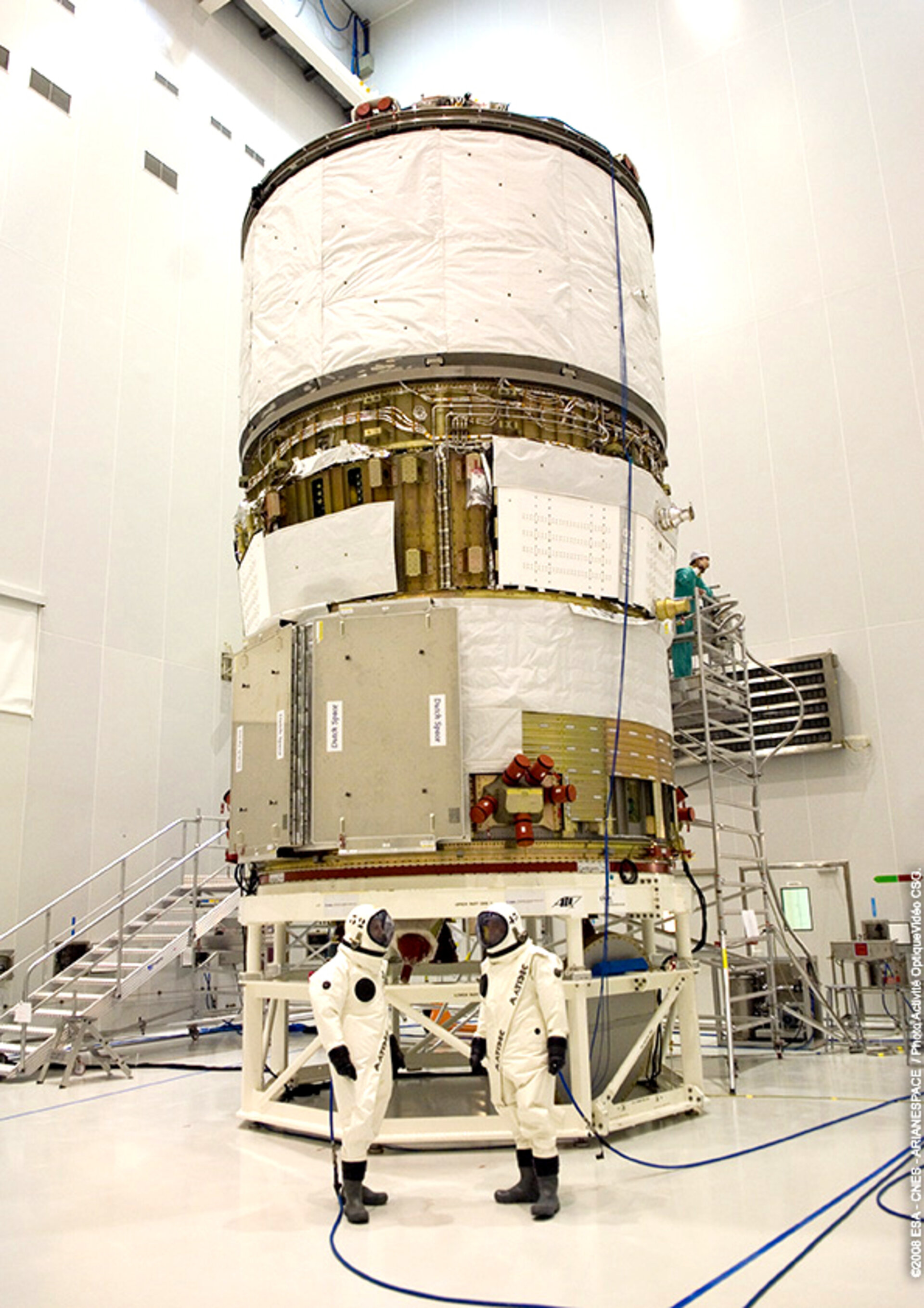 Fuelling of the Jules Verne Automated Transfer Vehicle has started at Europe’s Spaceport. ATV is being loaded with Russian refuelling propellant destined for the International Space Station. After a month of fuelling operations, the launch and maiden voyage of the first European resupply spaceship is scheduled for the second half of February.

Inside the fuelling chamber, the spacecraft was prepared for loading operations, which began as scheduled on 8 January and will continue until early February.

In cooperation with ESA’s ATV project experts and Russian engineers on site, a dozen specialised technicians from Astrium sites in Bremen, Lampoldshausen (Germany), Stevenage (United Kingdom) and Les Mureaux (France) are in charge of these time-consuming and delicate operations.

“We are pleased with how well the schedule is progressing so far. This week, as planned, two identical tanks on the ATV were successfully loaded with 296 kg of Russian UDMH (Unsymmetrical dimethylhydrazine) which is the propellant fuel to be delivered to the International Space Station's (ISS) Russian-built propulsion tanks”, said Dominique Siruguet, ESA ATV Campaign Manager.

As a precaution against the toxic and explosive characteristics of the hydrazine, a series of strict measures are in place, such as the requirement for the ‘scapemen’ - the fuelling specialists – to wear special suits during fuelling operations. There are three teams of three ‘scapemen’. Because it is exhausting work wearing a pressurised suit in a high-risk environment, their task is limited to periods of four hour operations.

Next week, the nitrogen tetroxide oxidiser (N2O4) (which provides a source of oxygen so the fuel can ignite and burn in orbit), will also be stored on board the ATV to be delivered in orbit to the ISS. When Jules Verne is attached to the Station, both Russian produced UDMH and nitrogen tetroxide will be transferred through dedicated pipes which pass through the docking mechanism to the Space Station's own plumbing.

On 20 January, 20 kg of pressurised gaseous oxygen will be loaded into Jules Verne. Through to the end of the month, the largest quantity of propellant will be fuelled on board: around 2216 kg of MMH (Monomethylhydrazine) and MON3 (Mixed Oxides of Nitrogen) propellant which will be used by the ATV’s own propulsion system. It will be used for the ATV’s autonomous navigation towards the ISS and, once docked, to control the attitude and orbit, including re-boost of the whole space complex. In free flight the ATV navigates as a fully automated spaceship, with four main engines (490 N thrust) plus 28 smaller thrusters (220 N) for attitude control.

“The month-long fuelling campaign is a result of having to load four different propellants, some in large quantities, and also some oxygen. Since each propellant is complex and dangerous to handle, the preparatory operations - the safety rules and the decontamination - takes much more time than the actual pressurised transfer of each product into the vehicle,” underlines Nicolas Chamussy, Astrium ATV Programme Manager based at Astrium facilities in Les Mureaux (France) and in Bremen (Germany). Quantitatively the ATV propellant load is at least three times that of the largest commercial satellites.

By the time ATV is moved to the BAF (Batiment d’Assemblage Final) in the first week of February, where it will be mated to Ariane 5 launcher, the ATV will hold four different types of propellant and 20 kg of oxygen, giving a total propellant mass of about 6.5 tonnes.

The whole Jules Verne ATV is 19.4 tonnes, including approximately 1300 kg of ‘dry cargo’. During fuelling operations, the ATV is electrically completely shut down for safety reasons, but each day the whole spacecraft is activated to check the spacecraft’s ‘health’, and charge the batteries once again.

The go-ahead for the start of Jules Verne fuelling operations also prompted the Astrium teams in Kourou to initiate the active preparation and integration of the Ariane 5. ATV will be carried into orbit by a special version of the Ariane 5 launch vehicle called the Ariane 5 Evolution Storable upper stage Automated Transfer Vehicle, or A5 ES-ATV for short. The mating of the two large vehicles is scheduled for early February.