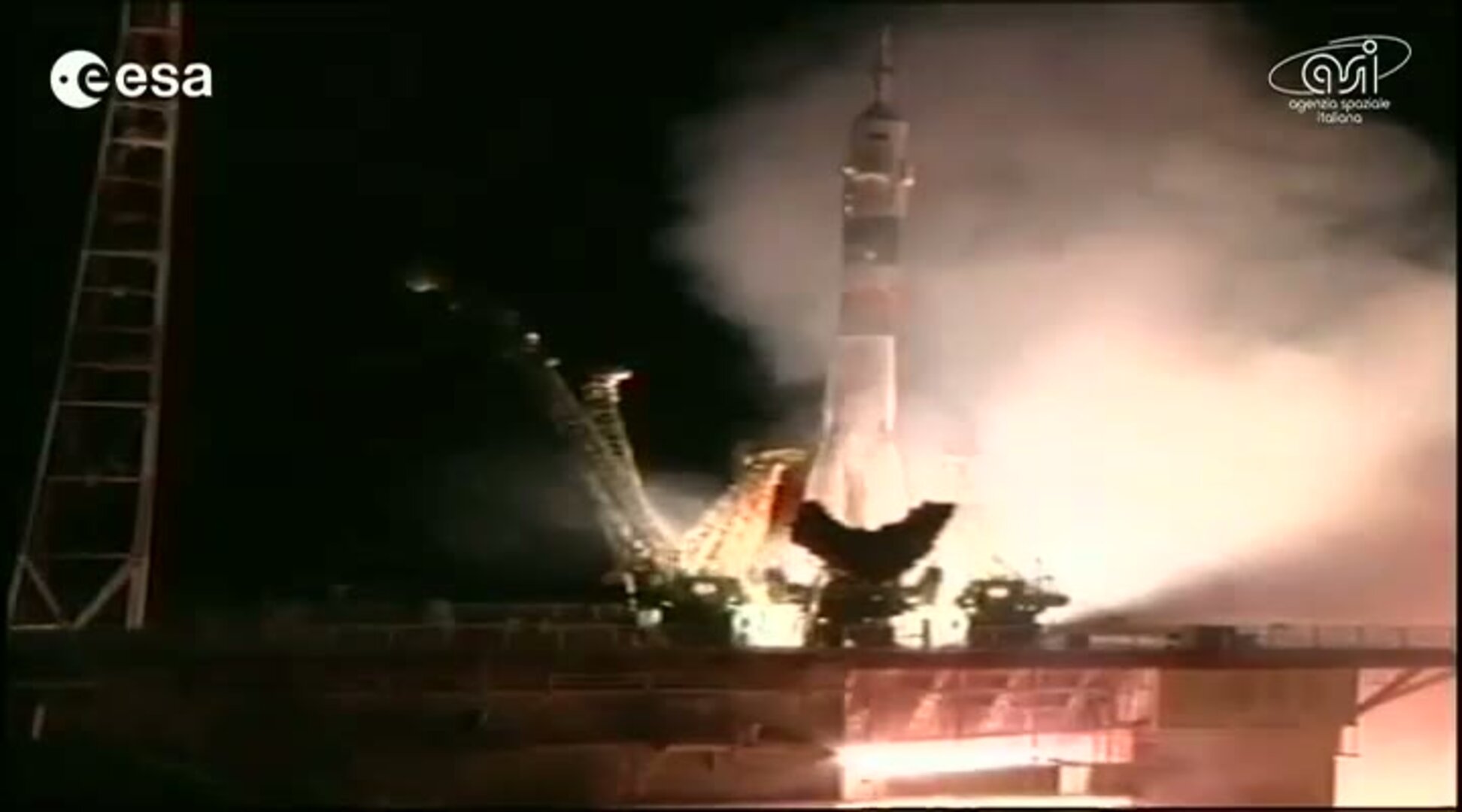 A Soyuz spacecraft launched from Kazakhstan last night safely docked with the International Space Station this morning, delivering ESA astronaut Luca Parmitano and his crewmates to the orbital outpost where they will live and work for five months.

Luca Parmitano is an ESA astronaut flying on board the Space Station for the Italian Space Agency (ASI) under a bilateral agreement between ASI and NASA.

With Luca were Russian Soyuz commander Fyodor Yurchikhin and NASA astronaut Karen Nyberg. All three will be part of the Station’s Expedition 36/37 crew as flight engineers. Luca’s own mission is named ‘Volare’ – ‘to fly’ in Italian – to symbolise the search for new frontiers and opportunities for discovery.

Following a series of manoeuvres during four orbits of our planet, Soyuz docked with the Station’s Rassvet module five hours and 46 minutes after liftoff.

This is only the second flight to arrive in such a short time, eight times faster than the previous two-day procedure. Luca is the first European flight engineer to co-pilot the Soyuz spacecraft on this fast-track approach.

Soyuz docked as planned at 02:17 GMT (04:17 CEST), and the hatch to their new home in space was opened at 04:14 GMT (06:14 CEST). The fresh crew were welcomed aboard by Station commander Pavel Vinogradov from Roscosmos and crewmembers Alexander Misurkin from Roscosmos and Chris Cassidy from NASA.

The new arrivals now have a week to adapt to the unique sensation of living in weightlessness, after which Luca has a very busy programme during his 166 days on the outpost until his return on 10 November.

His science programme reflects the diversity of research conducted on the Station: it includes around 20 ESA experiments, such as medical and biological research, fluid physics, materials science and technology demonstrations.

As a flight engineer, Luca will take part in docking ESA’s fourth Automated Transfer Vehicle, Albert Einstein, which is set for launch on 5 June. ATVs are the largest supply vessels for the Station in service today, delivering essential cargo, performing regular orbit reboosts and capable of manoeuvring the 420-tonne complex out of the way of hazardous space debris.

Further highlights of his Volare mission include two spacewalks to replace a camera mounted on Japan’s Kibo laboratory and retrieve science payloads. One spacewalk will prepare for the arrival of Russia’s Multipurpose Laboratory Module later this year. The new module will arrive with the ERA European Robotic Arm, the first arm able to move around the Station’s exterior.

Luca will also help to educate and inspire children from his workplace and home in space. Children all around the world will be encouraged to stay fit and live a healthy life through the international Mission-X contest. Older children can take up a European space robotics challenge, by creating remote controlled robots that help to unload a mockup of ATV Albert Einstein.

Luca was the first astronaut from the 2009 class assigned to a mission. Three other ESA astronauts from that class are training for long-duration missions on the Station: Alexander Gerst (Expedition 40/41, launch in May 2014), Samantha Cristoforetti (Expedition 42/43, launch in November 2014) and Timothy Peake (Expedition 46/47, launch November 2015). The two remaining astronauts, Andreas Mogensen and Thomas Pesquet, will be assigned for flights in the timeframe 2015 till  2017.

For more information about the Volare mission online, visit www.esa.int/Volare

Follow the Volare mission with live updates from Luca and the mission directors themselves on the blog: blogs.esa.int/Luca-Parmitano

ESA is also working actively with the EU on implementing the Galileo and Copernicus programmes.