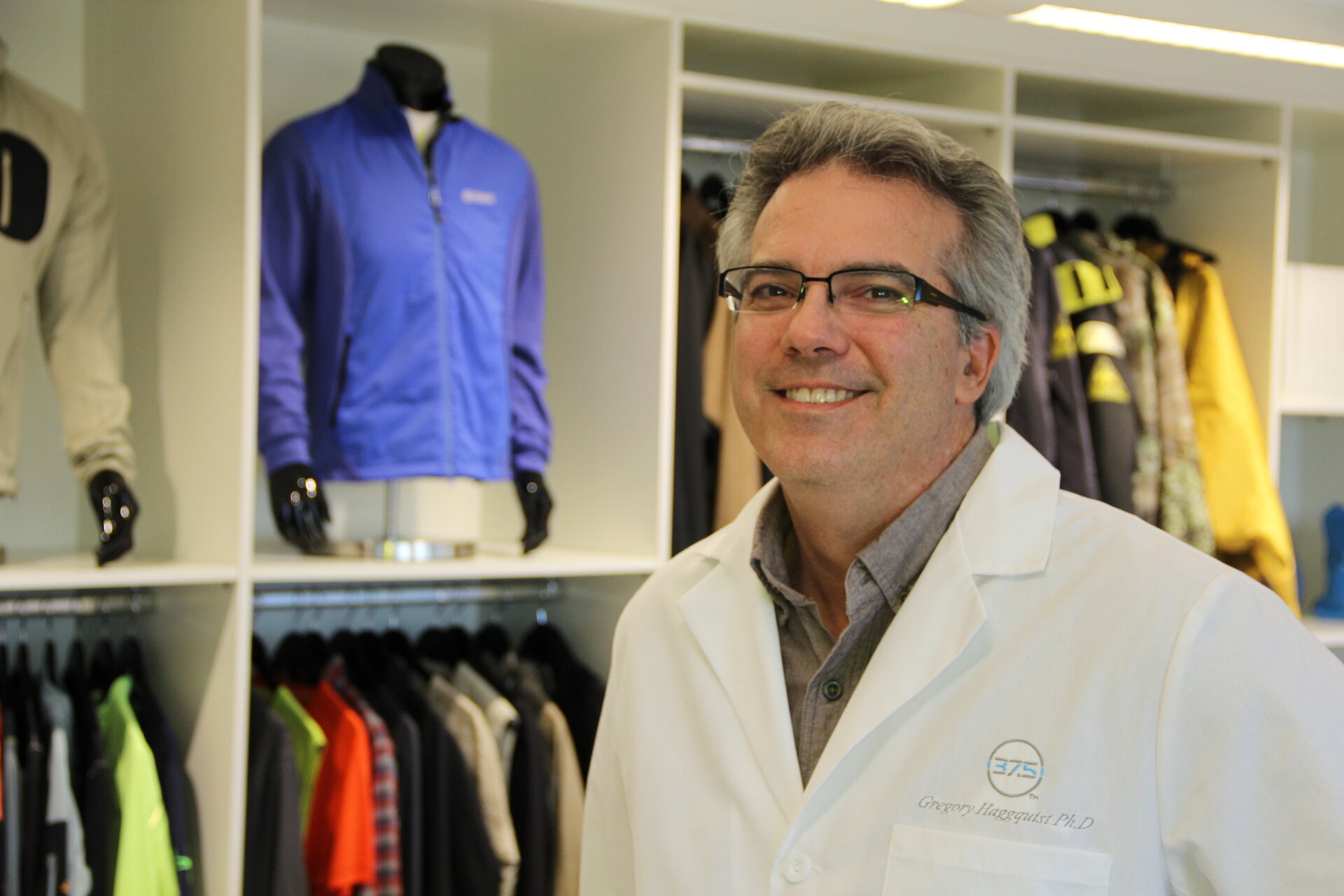 37.5 technology – named for the optimal human body core temperature (in celsius) and the optimal relative humidity level (by %) – uses active particle technology to maintain a desirable microclimate next to the wearer’s skin. Using activated carbon sourced from coconut shells and volcanic sand, 37.5 has an array of apparel partners, including Adidas and Asics, not to mention the US military – and now ESA’s Couture in Orbit. Founder and Chief Technology Officer Dr Gregory Haggquist tells his story.

Adding materials to other materials has been done for a long time – it’s well known that activated carbon works for odour control, for instance, being used for burial cloth in ancient times.

As a chemist, initially I was looking into odour-eliminating functionality, but then came upon this great byproduct: the resulting fabric felt great to wear. By drying out this micro-environment between fabric and skin you really enhance the cooling ability and comfort range.

At first the particles adsorb water molecules – like a landing strip for refuelling, where they can gather energy to go on – then body heat in the form of infrared light is absorbed by the particle and powers a pumping action to move the water molecules the rest of the way out of the system, creating a gradient from more to less water molecules.

The particles can also help to warm you when needed, returning absorbed heat to the body when limited water vapour is present.

We went through well over a thousand materials to pick out the precise physical properties we wanted. The material had to be able to absorb water, and also let it go, while absorbing the infrared heat energy thrown out by the human body.

In particular, the particles needed to be porous to have enough surface area to speed up the kinetics of the process, so that the material responds very quickly, to speed moisture away.

These particles exist in nature anyway, but the really challenging part was to be able to embed them into fabric in a usable way. If you simply melt your polyester so that it coats the particles completely, then they would no longer properly interact – their porosity would be blocked. So we found a coating material to encourage the particles to separate out from the polyester – kind of like M&Ms, sticking out of chocolate chip cookies. Then, taking it one step further, this coating is removed, exposing the particles so they begin to work.

It was a hard sell at first but then once someone wears the product for themselves it really becomes clear that something is happening. It’s been tested at the University of Colorado Boulder in terms of making athletes perform better, even to sleep better when embedded in bedding.

With most performance wear you wash them five times and their properties can degrade dramatically. But we’ve got products that have spent eight years out in the field and they’re still working like they were when they were first out of the bag. This is a catalytic process, so as long as these particles stay exposed, permanently embedded in the fibre, then they go on working. And by washing them you’re only cleaning out the particles’ pores for the next day’s use. So it’s a product that lasts a long time – I can imagine an astronaut on a trip from Earth to Mars wearing it!

As I understand, several of the fashion schools have been looking at using it. The technology looks and feels like any other fabric – it can be blended in with natural fibres like wool, cotton, linen or silk, to optimise wearability by adding a percentage of 37.5 to it.

Now we have several of the world’s best suit companies looking into using it for suit linings, for a really comfortable wear against the skin. So this is a long way from the traditional tin-foil space age material – it’s great to work with and you can blend it with whatever you want.