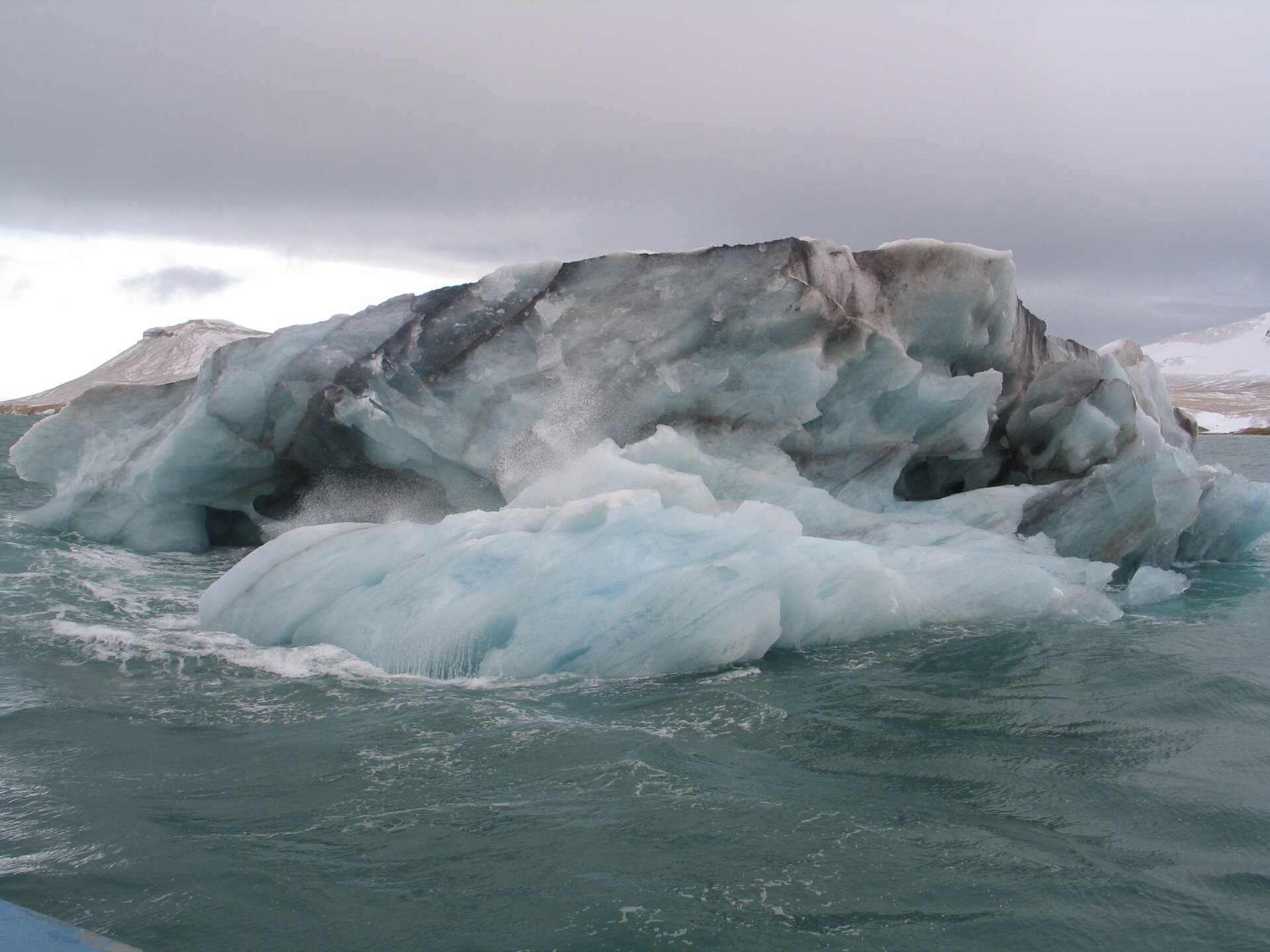 Today the boat’s rolling a lot, and a lot of people seem to be seasick. We’re still lying for anchor; however, the sea is becoming rough enough to gently rock us back and forth.

Personally I kind of like the rolling – it’s very soothing, only I’m getting a sore throat and I can feel my energy draining… And I don’t think I’m the only one either. I’m very much hoping that I’m not going to get sick, I would like to enjoy my last part of this expedition!

The wind has blown of most of the snow from the mountains surrounding us, but due to the wind, and the fact that they cannot set the zodiacs in the water in these conditions, it seems we may be moving on today.

We have now set course for Ebbadahlen, but very, very slowly, as to keep people from becoming too seasick. On the way we’ll stop and pick up a student who’s been camping somewhere on the way – apparently she has finished her field work and the rest of her party is continuing.

One of the things I forgot to write in my blog (ups) was that on the 16 August there were not only people leaving (Claus, Felippe and Ragnhild) but also people arriving, namely Will Brunner, (NASA, Ames research center), Jorge Vago (ESA, Project manager on EXOMars) and Marilyn Fogel (Carnegie, member of the management and the Babes Of Science), so these people are now along for the rest of ride.

We just sailed past a HUGE iceberg – apparently it’s grounded and the water here is 20 m deep. The iceberg must have been 3-4 m above the water and it was no more than 1 m from the ship when we were closest to it…. Amazing!

Absolutely amazing! And with the waves crashing against it… only problem is that it’s absolutely freezing and the wind is very strong so it’s almost impossible to stay on deck for more than a few minutes even when you’re packed in down jackets etc.

This afternoon around 16:00 the wind died down a bit and our management decided to take whoever wanted to, to shore. Most of us jumped at the chance, having been cooked up in the ship all day. The weather was positively freezing – actually slightly colder than freezing, however, we put on our down jackets and made our way in through a canyon in Hollandsbugten (still Wahlenbergfjorden).

The entire place here is covered with ice and snow all the way down to the water line, making it difficult to determine where the water ends and the shore begins, but it definitely feels and looks like the north pole around here.

We walked in through the canyon, almost no climbing at all, next to a glacial river running under a thin layer of ice… This must be the most beautiful place I’ve ever seen in my life – and I’ve seen some very beautiful places!

The top of the mountain rim along the canyon had an ice-wall (literally) on top showing where the ice-sheet stopped… none of us had any good explanations as to why it stopped so abruptly, however, I’m not complaining, it was gorgeous. The snow and ice had formed paper thin ice ledges over the river – a treacherous place to walk if you try to cross the river from the wrong side.

A long the way a few samples were collected (mostly rocks and fossils) and in the canyon wall you could see layers of volcanic ash embedded in the rock. Will built a small snowman, and we all had a minor snow-ball fight (I still have to get Will back for that….! ;-) ).

I also collected the most beautiful rocks… I don’t actually have a rock collection as such - that is; I suppose I do now – and it’s HUGE! Don’t worry I’ll show it off to anyone who’s interested when I get home ;-)

We have collected some of the equipment form the camp here (the helicopter returned to ship again today, pt. it’s taken the camera crew and photographers on a fly around the area) and are talking it with us on our way back to Longyearbyen.

We have a 1 Tb = 1000 Gb server on the ship for data and photos etc – so far we have ~ 20 Gb pictures, and only around half the people here have started uploading. The majority of these pictures are of course from Kjeld Ove, our professional photographer, and they are GORGEOUS! I can finally get back at my mother after this trip by showing her years worth of photographs… ;-) (ps. Love you mom ;-) )

So far we’ve only had one injury on the trip – Torbjørn hit his toe, on ship, but quite severely, a few days ago, so he was banned from going hiking until today.

Tonight's talks were by Jorge Vago and Ashley Stroupe. Jorge's talk was, of course, about ExoMars. ExoMars is ESA’s Mars mission which is meant to search for life. ExoMars has both a rover and a landing platform containing geo stationary instruments, called the GEP. The landing of ExoMars is adapted from the military – the shuttle is equipped with a parachute, at a certain height the GEP and Rover are fired from the parachute, released at a certain height carried by a rocket equipped landing gear and dropped the last short way while the landing gear shoots itself off into the distance.

ExoMars will follow in the wake of MSL (Mars Science Lab, NASAs next Mars mission) with slightly more sophisticated technology (on a more personal note, my master thesis and hopefully PhD will be connected to the magnetometer for the GEP on ExoMars, produced in Denmark, to measure fluctuations in the local magnetic fields on Mars).

Ashley's talk was on operating rovers and the MERs in general, i.e., what the information the data output from the rovers will automatically give to you e.g., reachability of the different instruments etc. and the general aids available to rover planners and drivers.

The MERS are equipped with a visual tool that allows the rover to automatically calculate how far it has gone and adjust its route accordingly. It also automatically categorizes the terrain around it according to how difficult it would be to traverse, and automatically avoid particularly hazardous areas.

She also showed a tonne of pictures from the MERs – many of which Morten Bo Madsen (my former supervisor who has provided my experiment for this expedition) has shown me in the midst of his immense enthusiasm for Mars – but never the less amazing pictures and fantastic rovers! The MER rovers are technological wonders – they were meant to run for 90 days, now they’ve been operating for more than 3 years and are still alive!

The rest of the night (which is not long) and tomorrow will be dedicated to discussing the data generated on the samples collected so far – personally I’m in the geology group… The weather forecast for this night is force 5/6 (more than 16 m/s) winds, so everything should be strapped down good for tonight and the rollercoaster ride will most likely start around 2:00 o’clock on our way to Ebbadahlen.