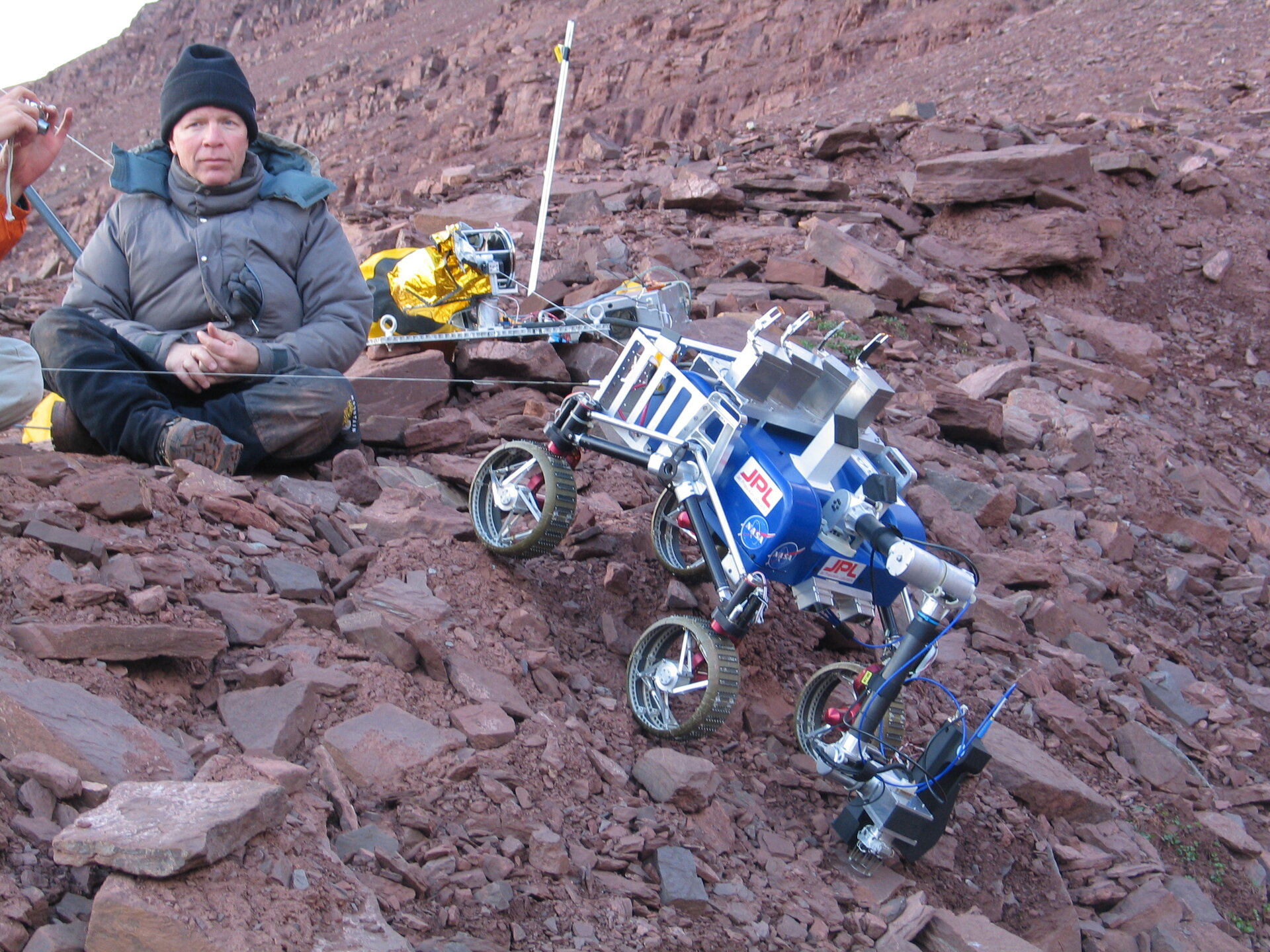 Today is the rover-testing day, the rover in this case being the actual rover, CliffBot. It's very, very, very (insert appropriate swear word(s) here) cold and windy and it has been snowing on and off most of the day.

The rover, unfortunately cannot operate in snow (nor rain, nor fog) so they waited to take out until around lunch and then they've occasionally been coming back for spare parts, dinner etc.

The rest of us were supposed to go to Jotun Springs today (personally to pick up my magnet experiment which is still camped over there), but because of all the delays in relation to the rover it has now been postponed for tomorrow. We were also supposed to do the last of the rover (the "fake" rover) field test today and then go and see the site tomorrow, but as we still haven't finished the field test I don't know what will happen.

Personally my sleep deprivation is catching up with me (I've been up by 7 every morning and gone to bed anywhere between midnight and 04:30) so I've spent most of the afternoon sleeping ;-) probably a wise move, only I fell asleep with my contacts in (not so wise).

My entire morning consisted of entering samples into our sample database which is up and running to a certain extent - Garret still has some finishing touches to the software, but it's coming along - will have to do some more work when the finishing touches are running - also we have another tonne of samples I haven't entered into the system, but I need the people who has collected them to sit down with me and tell me what they are and from where and why etc. so. I've done as much as I possibly could today, but it hasn't been all that much.

I spend a lot of time on deck and on the bridge talking to the first mate (Terrier) hearing stories about life at sea etc. Personally I'm finding it very frustrating that I cannot judge distances here - the shore looks like it's ~250 m away and it's ~1.3 km. normally I don't find it that difficult to estimate distances at sea, and even on land I cannot judge probably!

I suppose it's the lack of reference points - there are no trees nor houses nor any of the things you are accustomed to, but still I'm starting to feel that it must be the curvature (or lack thereof) of the Earth that's cheating me, only I shouldn't think the difference would be that big... I talked to Terrier about this and we sat down with a nautical map and did some measurements and it seems that this may be the case, he also tells me that he thinks he can see further on the horizon here on a clear day than when they're further south - when you take the longitude and measure them against the corresponding distances there is a significant distance – even just from Longyearbyen to here in Bockfjorden!

I know that the longitude distances change up here, only I'm not really sure why. I'll have to find out when I get home and have access to the internet and the lexica-like knowledge about these kind of things, of my dad ;-) He helped solve a lot of questions and discussions we (Mostly Mike and I) had in Longyearbyen about different (slightly irrelevant) issues ;-)

I think we'll be leaving Bockfjorden tomorrow for our next site, but with the turnout of our plans so far, it's difficult to tell ;-) I'm still very much enjoying the trip here - everything's so magnificent, and even though there's been a lot more waiting around today and yesterday than I expected, I could spend days just sitting on deck watching the scenery change as the clouds drift by and the Sun does circles in the sky above them.

I think I'll take a short ride to shore now and deliver some tea and stuff to the people in the field (its 19:30 and freezing and most of them have been over there for ~10 hours).

Around midnight the last people finally returned from the field, and now I will say goodnight for the day.