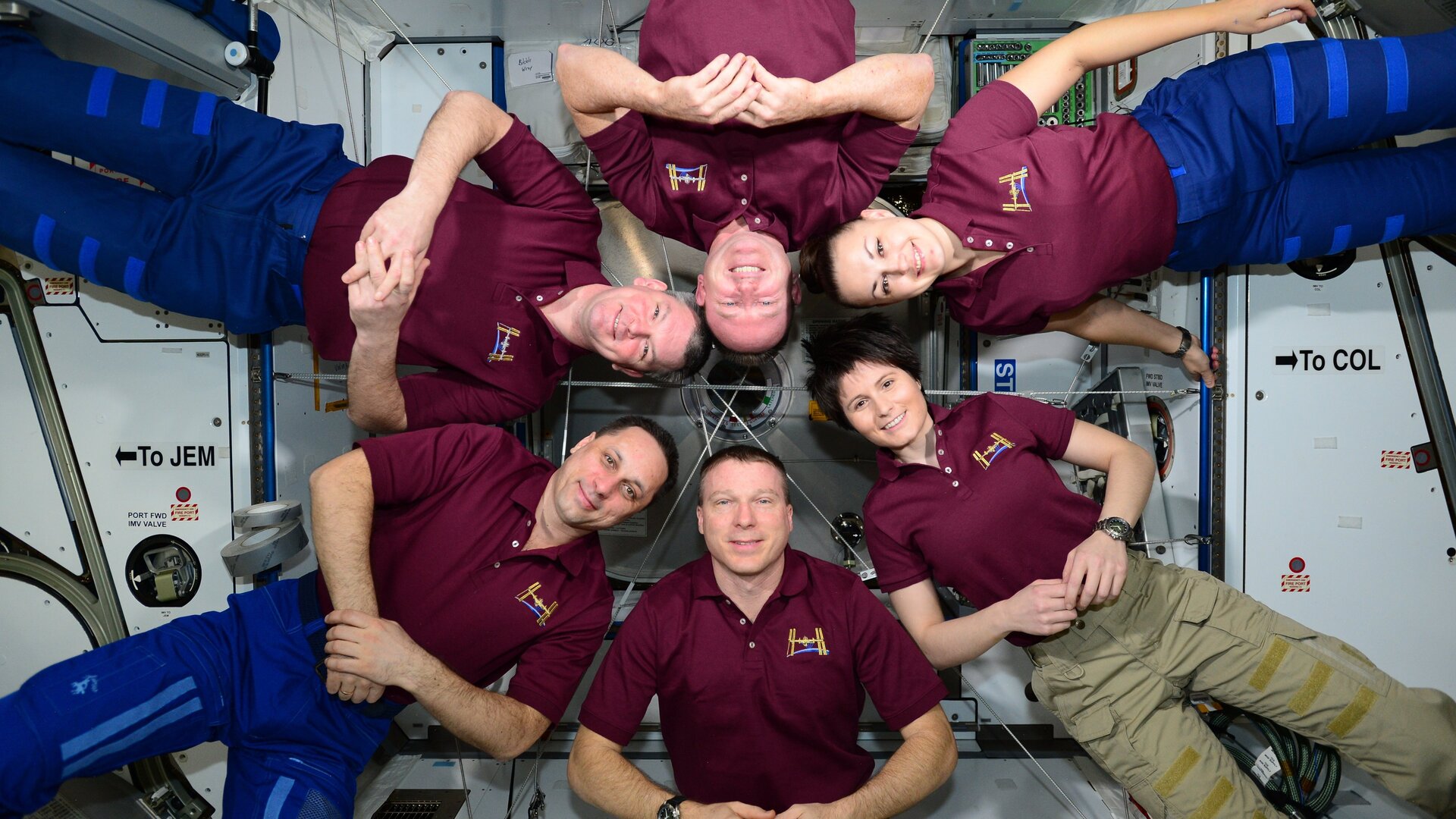 This article was correct at the end of the Futura mission but is no longer updated.

ESA astronaut Samantha Cristoforetti flew to the International Space Station in the three-person Soyuz spacecraft. The Station is permanently crewed by six astronauts, meaning that four Soyuz are launched every year and their astronauts spend around three months with three other crewmembers before they are replaced by a new Expedition.

Samantha’s crewmates, cosmonaut Anton Shkaplerov and NASA astronaut Terry Virts, arrived on the Station as the second part of Expedition 42. After three months the original crewmembers of Expedition 42 left for Earth and Samantha, Terry and Anton took over the first half of Expedition 43.

Alexander Samokutyaev flew into space for the first time to the International Space Station as flight engineer on Expedition 27 and 28. His launch took place in April 2011 and coincided with the 50th anniversary Yuri Gagarin’s pioneering orbit of Earth. He has worked for more than six hours outside the Station, performing a variety of tasks on the Russian part of the complex. He performed a second spacewalk with Max Suraev during the first half Expedition 42.

Yelena Serova is the fourth Russian female cosmonaut to travel into space, 17 years after her predecessor Yelena Kondakova flew on Space Shuttle STS-84. Yelena Serova is an engineer and economist and joined the Roscosmos cosmonaut corps in 2011.

Barry ‘Butch’ Wilmore is a NASA astronaut. He has a degree in electrical engineering, and has flown thousands of hours as a navy test pilot. He flew to the International Space Station on an 11-day Space Shuttle mission in November 2009. During the mission, the crew delivered two Express Logistics Carriers and about 13 tonnes of replacement parts for the Station.

He commanded the Station’s robotic arm during ESA astronaut Alexander Gerst’s spacewalk on 7 October 2014 and made his own sortie a week later.

Samantha was launched to the International Space Station and returned to Earth with these astronauts:

Anton was selected as a cosmonaut in 2003 after a career in the Russian Air Force, including flying the Mig-29 aircraft. Anton is a qualified parachuting instructor. He flew to the Station just two years before this Expedition during Expedition 29/30 and shared the outpost with ESA astronaut André Kuipers, among others.

Anton spent time outside the Station on a spacewalk in 2012 to move a crane and install new shielding.

Samantha’s other crewmate is also a fighter pilot in the air force. After an extensive career in the US Air Force, Terry joined the NASA astronaut corps in 2000. His first mission was to pilot Space Shuttle Endeavour to the International Space Station in 2010. The mission brought ESA’s Cupola window module and the outpost’s Tranquility life-support hub.

Samantha shared the latter part of her mission and the International Space Station with these astronauts:

Gennady is an extremely experienced astronaut, having flown to both the International Space Station and Russia’s own earlier Mir station. He was commander of the Space Station for Expeditions 9, 19, 20 and 31. In 2012 he returned to the Station for a third time, sharing it with ESA astronaut André Kuipers.

Gennady has nine spacewalks under his belt on both space stations. His spacewalk for Mir in 1998 was unusual in that they did not venture outside but entered a sealed-off depressurised module. In total, he has spent more than 32 hours on spacewalks.

Mikhail graduated as a cosmonaut in 1998 and has logged more than 176 days in space. His experience will grow impressively on this mission because it will last for a whole year. He will spend a year in space with NASA’s Scott Kelly to test human adaptation to weightlessness.

Another space veteran, Scott Kelly has flown in space three times to the International Space Station and to the Hubble telescope. On his previous flight to the Space Station in 2010 for Expedition 25/26 he was the Station commander.