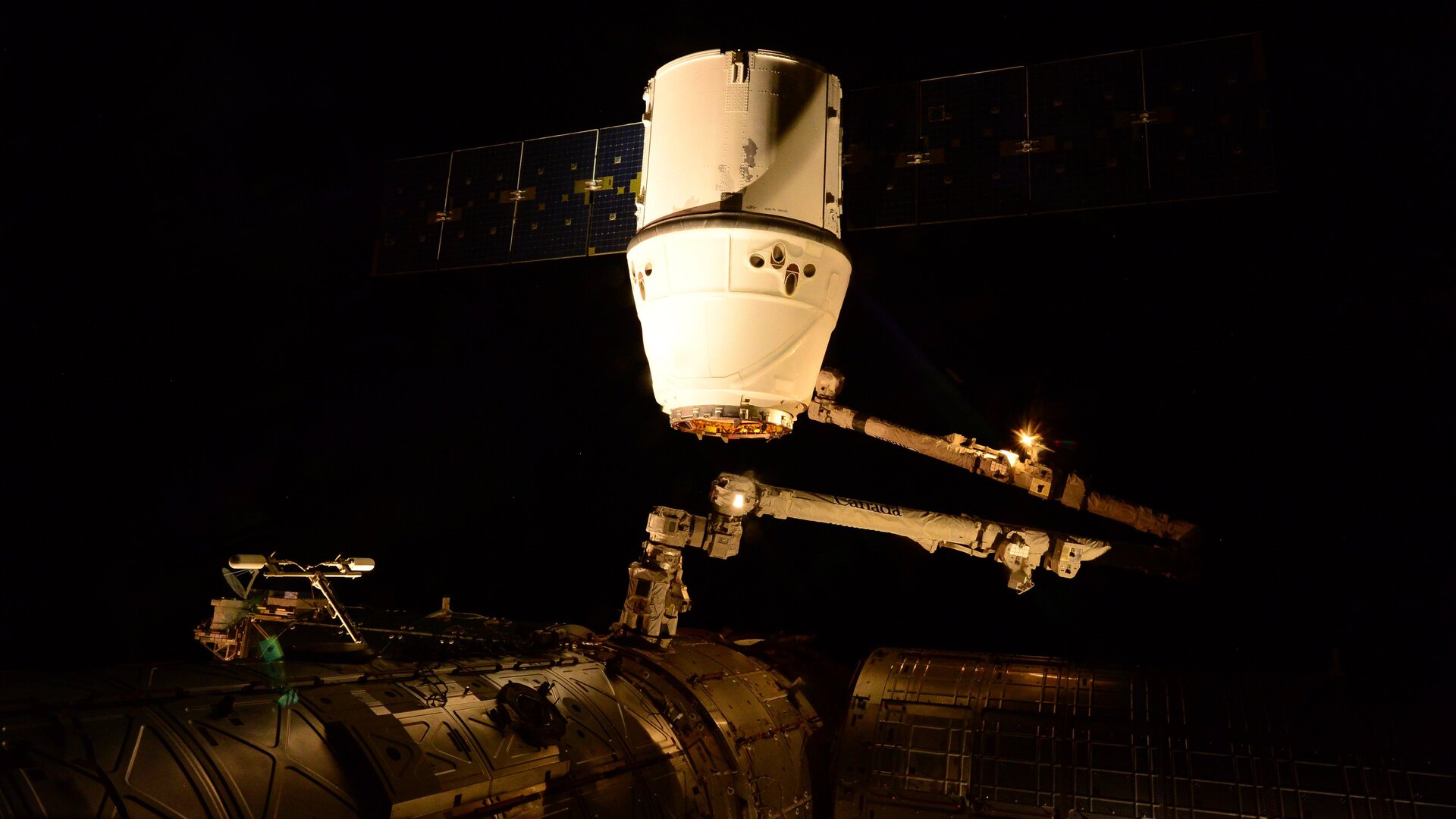 ESA astronaut Samantha Cristoforetti is nearing the end of her six-month Futura mission but her action-packed stay on the International Space Station is showing no signs of slowing down.

Last Friday saw the arrival of the second Dragon cargo ferry for Samantha. She controlled the 16 m-long robot arm to grab the spacecraft and pull it to the Space Station with NASA astronaut Terry Virts providing support.

Earlier this year, the Station was visited by a Dragon ferry with Samantha supporting NASA’s Butch Wilmore for the grappling and berthing.

The spacecraft has brought fresh supplies and experiments to the weightless research laboratory. Samantha has been performing experiments as diverse as studying fruit flies, investigating small particles in liquids, looking at microscopic worms and growing plants.

Fruit flies are a model organism for scientists and are studied extensively – they live for around a week and share many genes with humans. This experiment will chart gene changes over generations of fruit flies in space in relation to diseases.

Samantha has been looking at colloids – small particles suspended in liquids, found in milk and paint for example – for a NASA experiment to understand how they behave without gravity’s interference. This research ties in with ESA’s colloid experiments.

Another common traveller on the Station and an often-studied animal for biologists is the Caenorhabditis elegans worm. Previous research has shown that the worm adapts and even thrives in weightlessness, implying that muscles might age less in space.

Samantha looked after the worms and stored generations for analysis in this Japanese-led experiment, as did ESA astronaut André Kuipers on his 2004 mission. This time, however, researchers are looking at changes in DNA over four generations.

Samantha has also been tending to plants for the Aniso Tubule study that is looking at their stems and how they grow in weightlessness compared to Earth. This research will help to grow food crops in space, which would be necessary for longer missions. The research has implications for crops on Earth because plants spend a lot of energy growing stalks. This energy could be diverted to increase production if we knew more about how the mechanisms work.

The latest Dragon spacecraft delivered the second part of ESA’s Triplelux experiment that is investigating the immune system of organisms on a cellular level. Samantha kicked off the Triplelux-B experiment earlier this year by recording how immune cells from the common blue mussel react to an infection. Samantha will continue the experiment now that a second set of samples from a rat’s immune system has arrived.

These experiments are just some examples from the Station – read more about her work in Samantha’s logbook. Aside from her 40-hour-plus work week, she finds the time to take astounding pictures of our planet.

A special item on this week’s Dragon is the ‘ISSpresso’ machine that should offer a fresh brew of coffee for the Italian astronaut and her five crewmates. Spending months on the Station cut off from the world can be difficult, but a fresh cup of coffee can work wonders. Future capsules will extend the menu to include tea and soup.