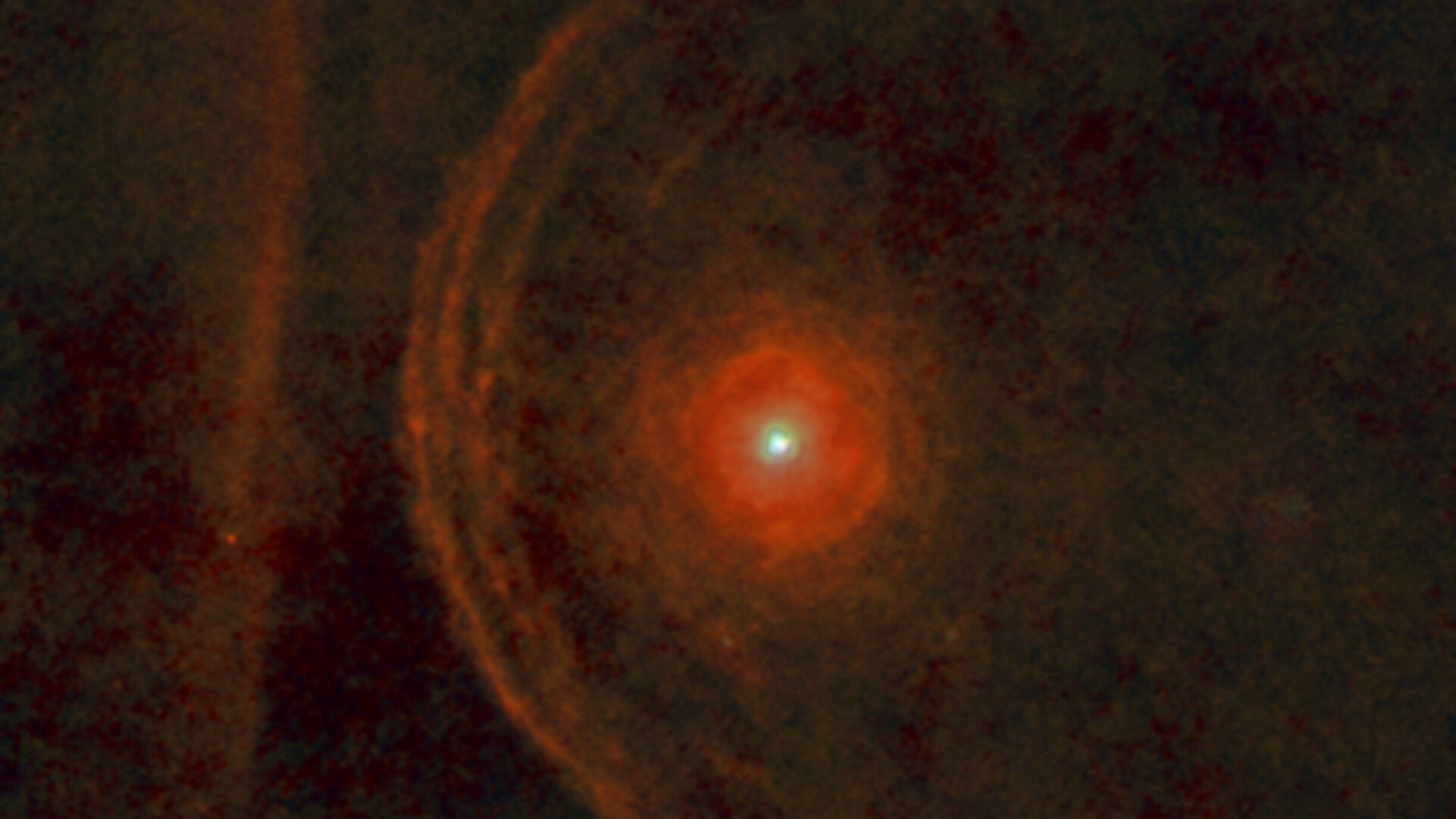 Multiple arcs are revealed around Betelgeuse, the nearest red supergiant star to Earth, in this new image from ESA’s Herschel space observatory. The star and its arc-shaped shields could collide with an intriguing dusty ‘wall’ in 5000 years.

Betelgeuse rides on the shoulder of the constellation Orion the Hunter. It can easily be seen with the naked eye in the northern hemisphere winter night sky as the orange–red star above and to the left of Orion’s famous three-star belt.

Roughly 1000 times the diameter of our Sun and shining 100 000 times more brightly, Betelgeuse’s impressive statistics come with a cost. For this star is likely on its way to a spectacular supernova explosion, having already swelled into a red supergiant and shed a significant fraction of its outer layers.

The new far-infrared view from Herschel shows how the star’s winds are crashing against the surrounding interstellar medium, creating a bow shock as the star moves through space at speeds of around 30 km/s.

A series of broken, dusty arcs ahead of the star’s direction of motion testify to a turbulent history of mass loss.

Closer to the star itself, an inner envelope of material shows a pronounced asymmetric structure. Large convective cells in the star’s outer atmosphere have likely resulted in localised, clumpy ejections of dusty debris at different stages in the past.

An intriguing linear structure is also seen further away from the star, beyond the dusty arcs. While some earlier theories proposed that this bar was a result of material ejected during a previous stage of stellar evolution, analysis of the new image suggests that it is either a linear filament linked to the Galaxy’s magnetic field, or the edge of a nearby interstellar cloud that is being illuminated by Betelgeuse.

If the bar is a completely separate object, then taking into account the motion of Betelgeuse and its arcs and the separation between them and the bar, the outermost arc will collide with the bar in just 5000 years, with the red supergiant star itself hitting the bar roughly 12 500 years later.

“The enigmatic nature of the circumstellar envelope and bow shock surrounding Betelgeuse as revealed by Herschel,” by L. Decin et al, was published in Astronomy & Astrophysics, December 2012.