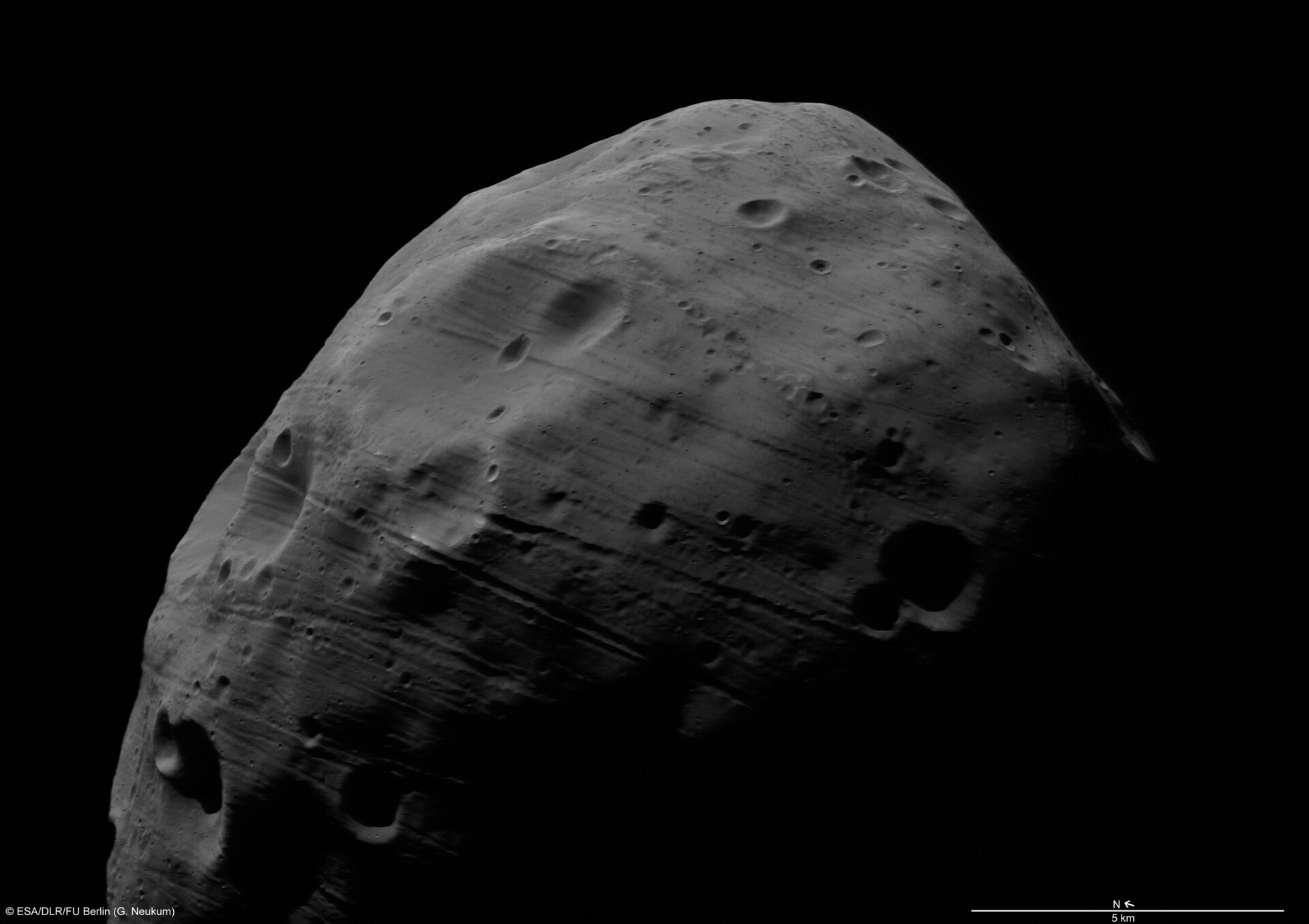 Mars Express closed in on the intriguing martian moon Phobos at 6:50 CEST on 23 July, flying past at 2.96 km/s, only 100 km from the centre of the moon. The ESA spacecraft’s fly-bys of the moon have returned its most detailed full-disc images ever, also in 3-D, using the High Resolution Stereo Camera on board.

Phobos is what scientists call a ‘small irregular body’. Measuring 27 km × 22 km × 19 km, it is one of the least reflective objects in the Solar System, thought to be a captured asteroid or a remnant of the material that formed the planets.

The best full-disc images of Phobos ever

The HRSC images, which are still under processing, form a bounty for scientists studying Phobos. They are a result of observations carried out over several close fly-bys of the martian moon, performed over the past three weeks. At their best, the pictures have a resolution of 3.7 m/pixel and are taken in five channels to obtain images in 3-D and to perform analyses of the physical properties of the surface.

The images obtained by several other spacecraft so far have either been of a lower resolution, or not available in 3D and have not covered the entire disc of Phobos. This is also the first time that portions of the far-side of the moon have been imaged in such high resolution (Phobos always faces Mars on the same side).

In observing Phobos, Mars Express benefits from its highly elliptical orbit which takes it from a closest distance of 270 km from the planet to a maximum of (from the centre of Mars), crossing the 6000 km orbit of the martian moon. Mars Express imaged the far-side of Phobos (with respect to Mars) for the first time after NASA’s Viking mission in the 1970s, by flying outside the spacecraft’s orbit around Mars.

Phobos-Grunt (roughly translated as Phobos soil), a Russian sample-return mission, is due for launch in 2009. It is expected to land on the far-side of Phobos at a region between 5° south to 5° north, and 230° west to 235° west.

The HRSC observations have been awaited eagerly to better assess the choice of and characterise the landing site.

The moon's remarkably grooved surface can be seen in the pictures quite clearly. The origin of these grooves is still debated. It is not known whether they are produced by ejecta thrown up from impacts on Mars, or if they result from the surface regolith, or soil, slipping into internal fissures.

In this image, at least two families of grooves with distinct orientations can be seen along with what is either a chain of pits or craters.

The stereo observations (resolution 3.7 m/pixel) are important for structural analysis and they will be used to derive a digital terrain model (a 3-D map of the surface that includes elevation data). The extra photometric channels (at 7.4 m/pixel) make it possible to study the properties of the Phobos regolith at micron to millimetre scales.

Managing the close fly-bys was an operational challenge, made possible by spacecraft operations engineers and scientists who worked together to specially optimise Mars Express’s trajectory and obtain the best possible views.

The observation made use of a spacecraft slew, a special manoeuvre whereby the body of the spacecraft is rotated against the direction of motion, to effectively lower the speed at which the target passes in the field of view of the camera. This makes it possible to avoid blurring of the pictures despite the high fly-by velocities, whilst maintaining acceptable exposure time.

The HRSC Super Resolution Channel (SRC) also observed during this close fly-by, with a nominal resolution of 90 cm/pixel. As expected, despite the slew, some residual motion blur has crept into the image, but much detail will be recovered after further processing.

In the days running up to the observation, the primary star-tracker - a navigation device that helps the spacecraft point its instruments at the target accurately - experienced some temporary difficulty in recognising the star constellations in its field of view, leaving the spacecraft operating on its secondary system. Concerned that this might affect this critical observation, the team at ESA's European Space Operations Centre (ESOC) in Darmstadt, Germany, worked intensely to recover the primary system and were able to switch back successfully two days before the fly-by.

The Principal Investigator (PI) for the HRSC experiment on ESA’s Mars Express is Prof. Dr Gerhard Neukum, who also designed the camera technically. The HRSC science team consists of 45 Co-Investigators from 32 institutions located in 10 nations. The camera was developed at the German Aerospace Center (DLR) under the PI in cooperation with industrial partners (EADS Astrium, Lewicki Microelectronic GmbH and Jena-Optronik GmbH). It is operated through ESA/ESOC by the DLR Institute of Planetary Research, where systematic processing of the image data is carried out. The scenes shown here were processed by the PI group at the Institute for Geosciences of the Freie Universitaet Berlin in cooperation with the DLR Institute of Planetary Research, Berlin.