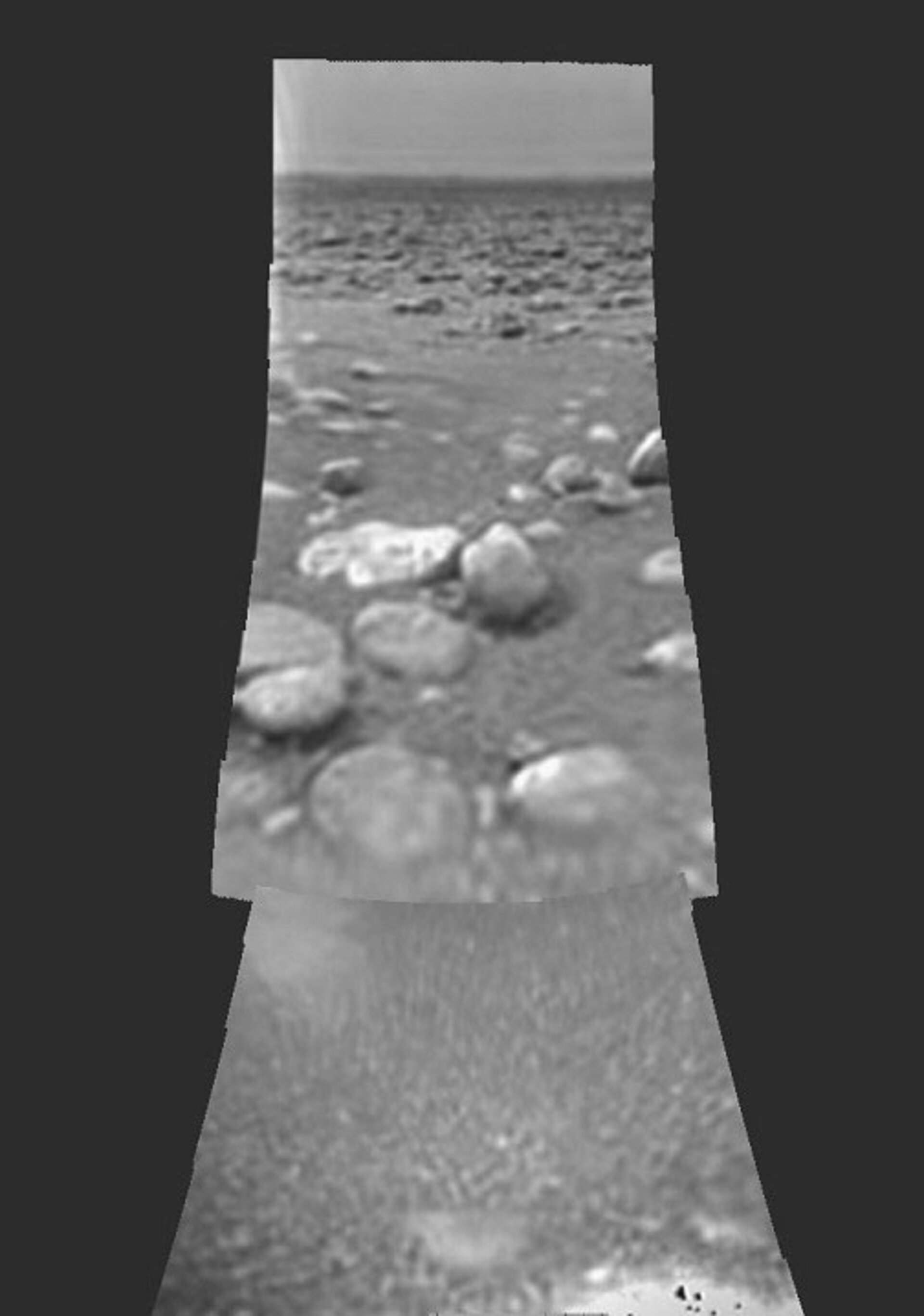 The high-resolution images taken in Titan's atmosphere by the Descent Imager/Spectral Radiometer (DISR) were spectacular, but not the only surprises obtained during descent. Both DISR and the Doppler Wind Experiment data have given Huygens scientists much to think about.

The irreversible conversion of methane into other hydrocarbons in Titan's stratosphere implies a surface or subsurface 'reservoir' of methane. Although the NASA/ESA/ASI Cassini orbiter has not seen a global surface reservoir, and DISR images do not show liquid hydrocarbon pools on the surface either, this instrument's images do reveal the traces of flowing liquid.

Images taken after landing in one of these lowland areas show more than 50 stones which vary between 3 mm and 15 cm in diameter. No rocks larger than 15 cm are seen. This size distribution suggests that rocks larger than 15 cm cannot be transported to the lakebed, while small pebbles (less than 5 cm) are quickly removed from the surface.

From these features, along with apparent 'ponds' and elongated 'islands' oriented parallel to the 'coastline', the scientists can propose explanations for the nature of the brightness variations spread throughout the images.

They appear to be controlled by a flow of 'runny' liquids (consistent with methane, ethane or both) down slopes, whether caused by precipitation or springs.

The light–dark brightness difference can be explained by the 'irrigation' of the bright terrain, with darker material being removed and carried into the channels, which discharge into the region 'offshore', thereby darkening it.

'Aeolian' (wind) processes, such as gusts, and Titan's low gravity may aid this migration.

The surface science lamp worked exactly as planned, permitting surface reflection measurements even in strong methane absorption bands. Operations after landing included the collection of successive images as well as spectral reflectance measurements of the surface illuminated by the lamp from an assumed height of roughly 30 cm.

The infrared reflectance spectrum — the rise and fall of brightness at different wavelengths of light — measured for the surface is unlike any other in the Solar System. There are signs of organic materials such as 'tholins', and dips in the brightness consistent with water ice are also seen. However, the most intriguing feature in the surface spectrum is an infrared signature of a material not matched by any combination of spectra of ices and complex organics found on Earth.

These spectra also show a methane abundance near the surface of 5 +/-1%, which is in precise agreement with the 4.9% in situ measurements made by the probe's Gas Chromatograph Mass Spectrometer. The corresponding relative humidity of methane is about 50%.

Therefore, the surface is not 'bone dry', but this does rule out extensive ground fogs in the vicinity of the landing site caused by methane alone.

Taken together, these new observations make clearer the role of methane in shaping the surface of Titan and how it is recycled into the atmosphere. The substantial relative humidity of methane and the obvious evidence of fluid flow on the surface provide evidence for methane 'rain' and subsequent evaporation. Some hints of 'cryovolcanic' flows may also be present in the images.

By assembling the panoramic mosaics, the Huygens scientists could determine the descent trajectory as part of an iterative process of image reconstruction. The trajectory could be used to derive the probe ground track and see how wind speeds changed with altitude.

The winds dropped to zero and reversed at around 7 km, near the expected top of the planetary boundary layer, producing a west-northwestwardly motion for about 1 km during the last 15 minutes of the descent.

The Doppler Wind Experiment (DWE) data which were obtained from two Earth-based telescopes have confirmed the findings of the DISR and provided a high-resolution vertical profile of Titan's winds.

The DWE not only confirmed the considerable turbulence above 120 km and the eastward drift in prograde winds, but also the weak retrograde (westward) winds near the surface.

Significantly, this experiment provided the first in situ confirmation of Titan's 'superrotation' (the atmosphere is moving faster than the surface). Unexpectedly, it also found a layer of very low wind velocity between 60 and 100 km altitude, which is presently unexplained.

This summary is based on papers which appear on line in Nature, on 30 November 2005.