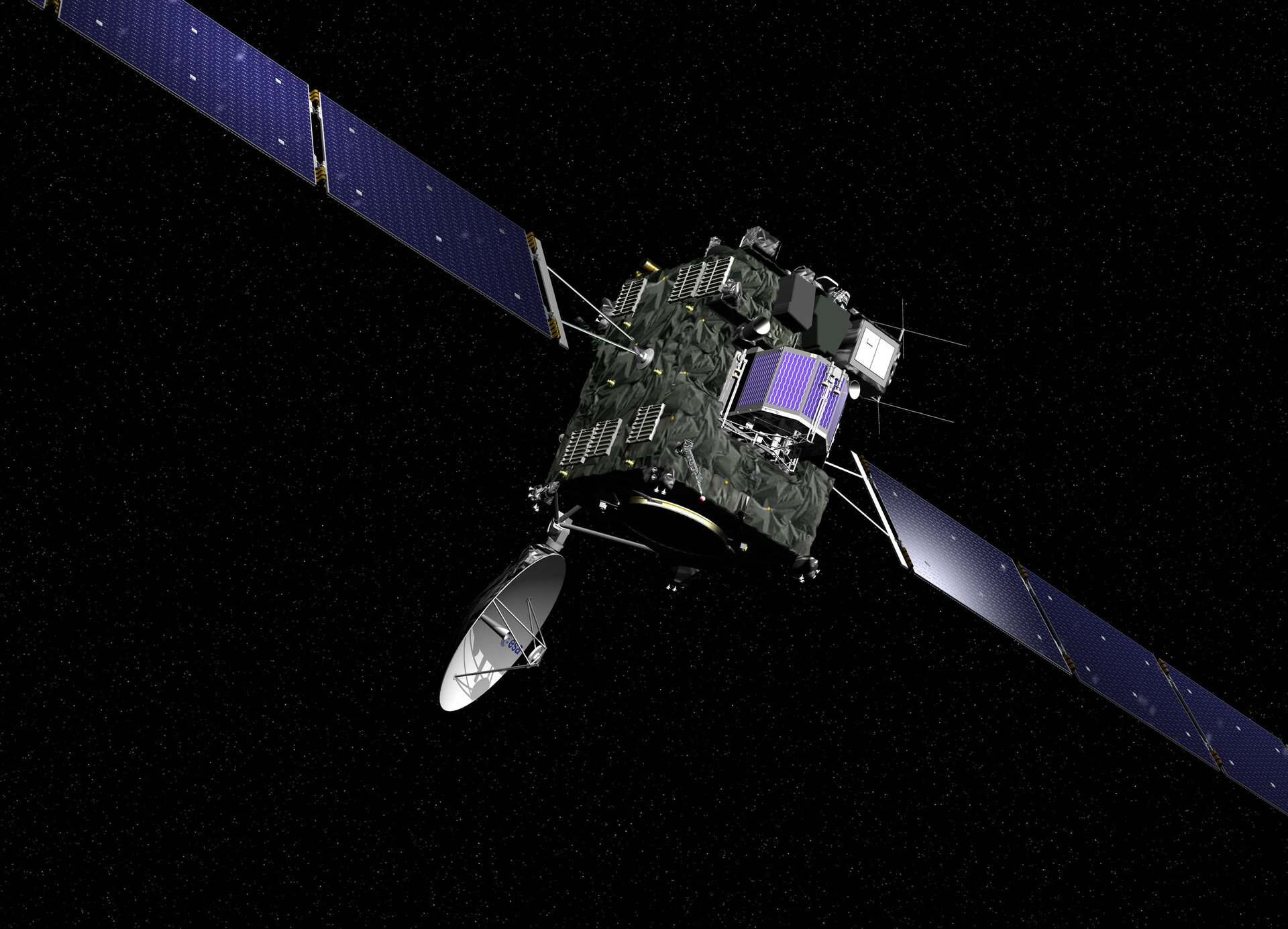 At 20:58 CEST (18:58 UT) last night, ESA's Rosetta probe approached asteroid 2867 Steins, coming to within a distance of only 800 km from it. Steins is Rosetta's first nominal scientific target in its 11½ year mission to ultimately explore the nucleus of Comet 67P/Churyumov-Gerasimenko.

The success of this 'close' encounter was confirmed at 22:14 CEST, when ESA's ground control team at the European Space Operations Centre (ESOC) in Darmstadt, Germany, received initial telemetry from the spacecraft. During the flyby operations, Rosetta was out of reach as regards communication links because its antenna had to be turned away from Earth. At a distance of about 2.41 AU (360 million kilometres) from our planet, the radio signal from the probe took 20 minutes to reach the ground.

Steins is a small asteroid of irregular shape with a diameter of only 4.6 km. It belongs to the rare class of E-type asteroids, which had not been directly observed by an interplanetary spacecraft before. Such asteroids are quite small in size and orbit and are mostly found in the inner part of the main asteroid belt located between Mars and Jupiter. They probably originate from the mantle of larger asteroids destroyed in the early history of the Solar System, and are thought to be composed mainly of silicate minerals with little or no iron content.

The data collected by Rosetta last night and which will be analysed over the coming days and weeks will finally unveil the true nature of Steins.

Through the study of minor bodies such as asteroids, Rosetta is opening up a new window onto the early history of our Solar System. It will give us a better understanding of the origins and evolution of the planets, and also a key to better interpreting asteroid data collected from the ground.

This is not Rosetta's first look at Steins. Over two years ago, in March 2006, the Osiris camera onboard Rosetta observed the brightness variations of this rotating asteroid from a distance of 159 million kilometres (a little over the distance between Earth and the Sun), and was able to determine that the tiny asteroid spins around its axis in about six hours.

Together with the two navigation cameras onboard, Osiris was again pointed towards Steins on 4 August and continued to observe the asteroid until 4 September, in order to assist Rosetta's navigation by optical means – a first in the history of ESA spacecraft operations. A few days before the flyby, most of the Rosetta orbiter instruments, as well as the Philae lander magnetometer, were switched on to collect science data on the asteroid, with ever-increasing accuracy as the spacecraft closed in on it.

Rosetta's powerful instruments have initially been focusing on the asteroid's orbital motion, rotation, shape and density. As the distance has diminished, the investigation has broadened to take in the observation of surface properties and features, and the analysis of the chemical and mineralogical composition of the terrains, as well as their relative ages and the effects of the solar wind on the surface.

At its closest approach, Rosetta flew by Steins at a relative speed of 8.6 km/s. To keep the small asteroid in the field of view of its instruments, the spacecraft had to perform a rapid and highly demanding rotation manoeuvre, which had been successfully rehearsed in March this year.

A preliminary analysis of the first data from the flyby was presented to the press at ESOC at 12:00 CEST today.

To Steins and beyond

"Steins might be small, but we're making big science here", said Dr David Southwood, ESA's Director of Science and Robotic Exploration. "The better we learn to know the different kinds of asteroids, the better we will understand our origins in the past. Moreover, when such Solar System wanderers escape from the belt they could become a threat to Earth. The better we know them, the better we will be able to mitigate the risks some of them might present in the future."

"Rosetta performed very well all along," Southwood continued. " This was a complex manoeuvre to keep such a small target in sight, but the spacecraft came through with flying colours. Now we are even more confident in its capacity to conduct the complex tasks that await it at comet Churyumov-Gerasimenko."

Science observations of Steins will continue until 10 September.

Since its launch by an Ariane 5 rocket on 2 March 2004, Rosetta has already travelled about 3.7 thousand million kilometres and swung by the Earth twice and Mars once for gravity-assist manoeuvres. On 17 December this year Rosetta will reach the maximum distance from the Sun in its current orbit, and will then head back towards Earth for the next and last gravitational kick from our planet on 13 November 2009. This will give the probe its final push toward its cometary target.

On its way, Rosetta is scheduled to conduct another flyby, this time with the much larger (21) Lutetia asteroid, on 10 July 2010. Arrival at 67P/Churyumov-Gerasimenko is due by mid-2014. By that time the probe will have covered a distance of about 6.5 thousand million kilometres.