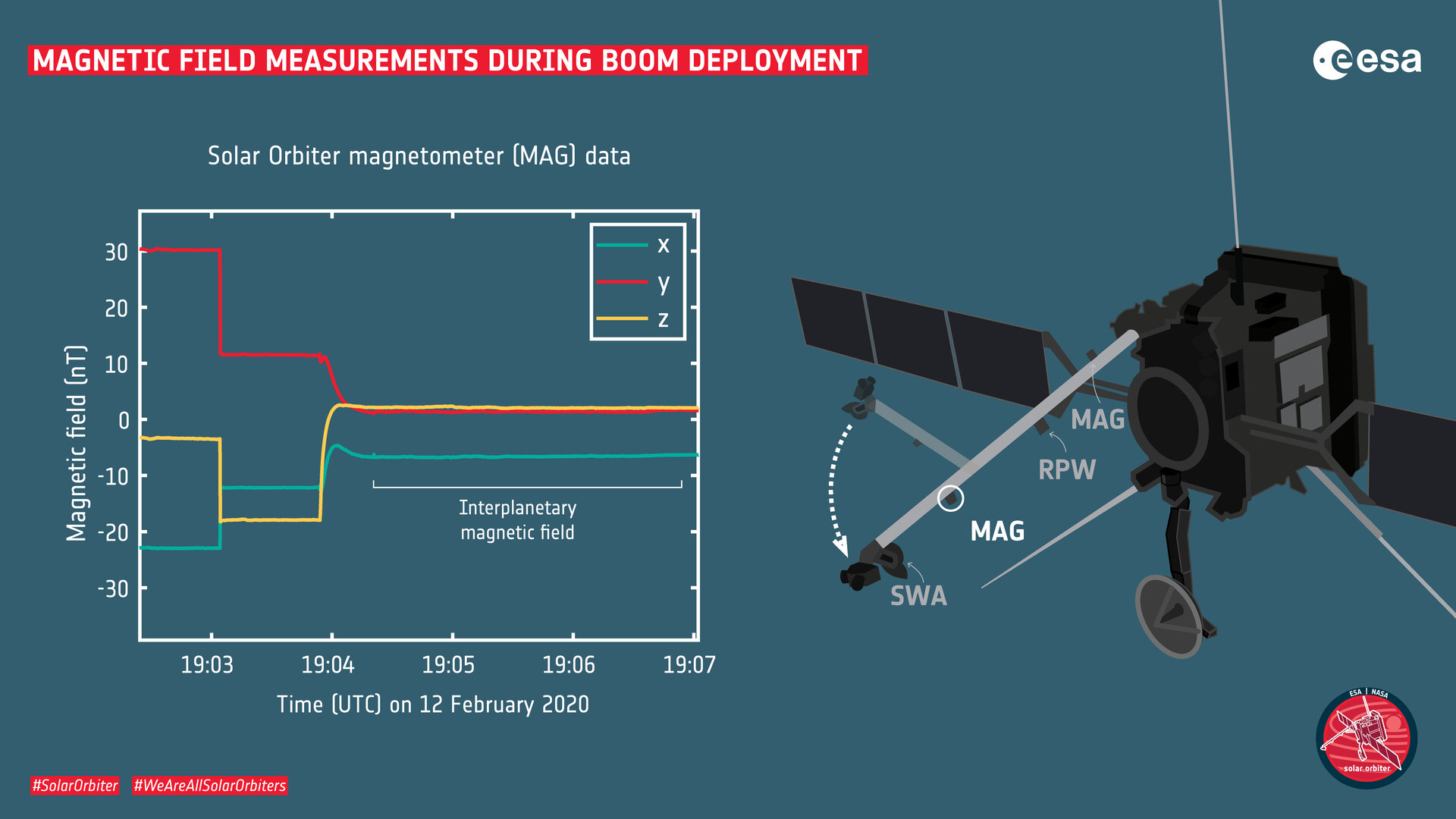 First measurements by a Solar Orbiter science instrument reached the ground on Thursday 13 February providing a confirmation to the international science teams that the magnetometer on board is in good health following a successful deployment of the spacecraft’s instrument boom.

Solar Orbiter, ESA’s new Sun-exploring spacecraft, launched on Monday 10 February. It carries ten scientific instruments, four of which measure properties of the environment around the spacecraft, especially electromagnetic characteristics of the solar wind, the stream of charged particles flowing from the Sun. Three of these ‘in situ’ instruments have sensors located on the 4.4 m-long boom.

“We measure magnetic fields thousands of times smaller than those we are familiar with on Earth,” says Tim Horbury of Imperial College London, Principal Investigator for the Magnetometer instrument (MAG). “Even currents in electrical wires make magnetic fields far larger than what we need to measure. That’s why our sensors are on a boom, to keep them away from all the electrical activity inside the spacecraft.”

Ground controllers at the European Space Operations Centre in Darmstadt, Germany, switched on the magnetometer’s two sensors (one near the end of the boom and the other close to the spacecraft) about 21 hours after liftoff. The instrument recorded data before, during and after the boom’s deployment, allowing the scientists to understand the influence of the spacecraft on measurements in the space environment.

As the titanium/carbon-fibre boom stretched out over an overall 30-minute period on Wednesday, almost three days after liftoff, the scientists could observe the level of the magnetic field decrease by about one order of magnitude. While at the beginning they saw mostly the magnetic field of the spacecraft, at the end of the procedure, they got the first glimpse of the significantly weaker magnetic field in the surrounding environment.

“Measuring before, during, and after the boom deployment helps us to identify and characterise signals that are not linked to the solar wind, such as perturbations coming from the spacecraft platform and other instruments,” says Matthieu Kretzschmar, of Laboratoire de Physique et Chimie de l'Environnement et de l'Espace in Orleans, France, Lead Co-investigator behind another sensor located on the boom, the high frequency magnetometer of the Radio and Plasma Waves instrument (RPW) instrument.

“The spacecraft underwent extensive testing on ground to measure its magnetic properties in a special simulation facility, but we couldn’t fully test this aspect until now, in space, because the test equipment usually prevents us from reaching the needed very low level of magnetic field fluctuations,” he adds.

Next, the instruments will have to be calibrated before true science can begin.

Warming up for science 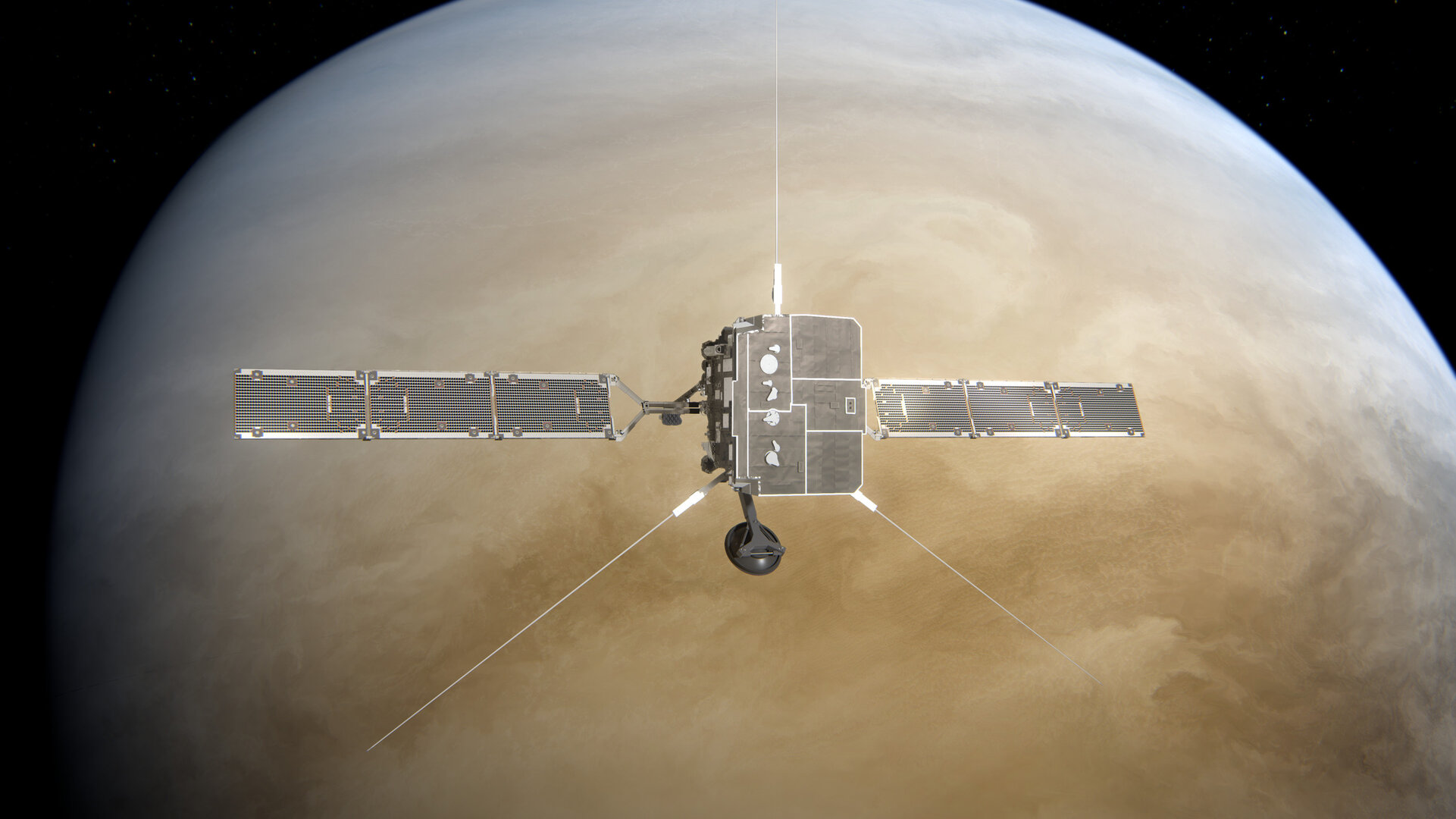 Solar Orbiter's journey to the Sun as it prepares to commence its ground-breaking mission.
Access the video

“Until the end of April, we will be gradually turning on the in-situ instruments and checking whether they are working correctly,” says Yannis Zouganelis, ESA’s deputy project scientist for the Solar Orbiter mission. “By the end of April, we will have a better idea of the performance of the instruments and hopefully start collecting first scientific data in mid-May.”

In addition to the instrument boom, the deployments of three antennas of the RPW instrument, which will study characteristics of electromagnetic and electrostatic waves in the solar wind, were successfully completed in the early hours of Thursday 13 February. The data of these specific deployments still need to be analysed.

In addition to the four in situ instruments, Solar Orbiter carries six remote-sensing instruments, essentially telescopes, that will be imaging the surface of the Sun at various wavelengths, obtaining the closest ever views of our parent star.

“The remote-sensing instruments will be commissioned in the coming months, and we look forward to testing them further in June, when Solar Orbiter gets nearer to the Sun,” Yannis adds.

The combination of both sets of instruments will allow scientists to link what happens on the Sun to the phenomena measured in the solar wind, enabling them to tackle mysteries such as the 11-year cycle of solar activity, the generation of the Sun’s magnetic field and how solar wind particles are accelerated to high energies.

“The ten instruments onboard our mission will be playing together like instruments in an orchestra,” says ESA Solar Orbiter project scientist Daniel Müller. “We have just started the rehearsal, and one by one, additional instruments will join. Once we are complete, in a few months’ time, we will be listening to the symphony of the Sun.”

Solar Orbiter is an ESA-led mission with strong NASA participation. The prime contractor is Airbus Defence and Space in Stevenage, UK. Solar Orbiter is the first ‘medium’-class mission implemented in the Cosmic Vision 2015-25 programme, the current planning cycle for ESA’s space science missions.