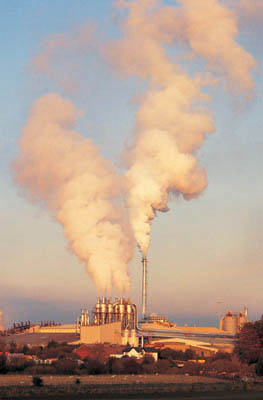 Every time we breathe out, we send carbon dioxide gas into the atmosphere. Carbon dioxide is one example of a greenhouse gas – a gas that traps heat.

Over the last 100 years, the amount of carbon dioxide in the atmosphere has been steadily increasing. Most of this increase has been due to human activities, such as burning of oil and coal, or clearing of forests.

Forests remove a lot of carbon dioxide from the air. However, this stored carbon is released into the atmosphere when trees are cleared or burnt.

Satellite data show that the world seems to be growing warmer. Most scientists think that there is a link between global warming and the rise in greenhouse gases. This is commonly known as the “Greenhouse Effect”.

Satellites such as ESA’s Envisat help us to learn more about global climate change and to predict what will happen in the future.

Some instruments on Envisat produce daily global maps of greenhouse gases such as methane (a gas commonly used in cookers and heating systems). Others show changes in temperature, snow, ice, lakes and forest cover.

Such information is vital in enforcing international agreements to cut back on greenhouse gas output.