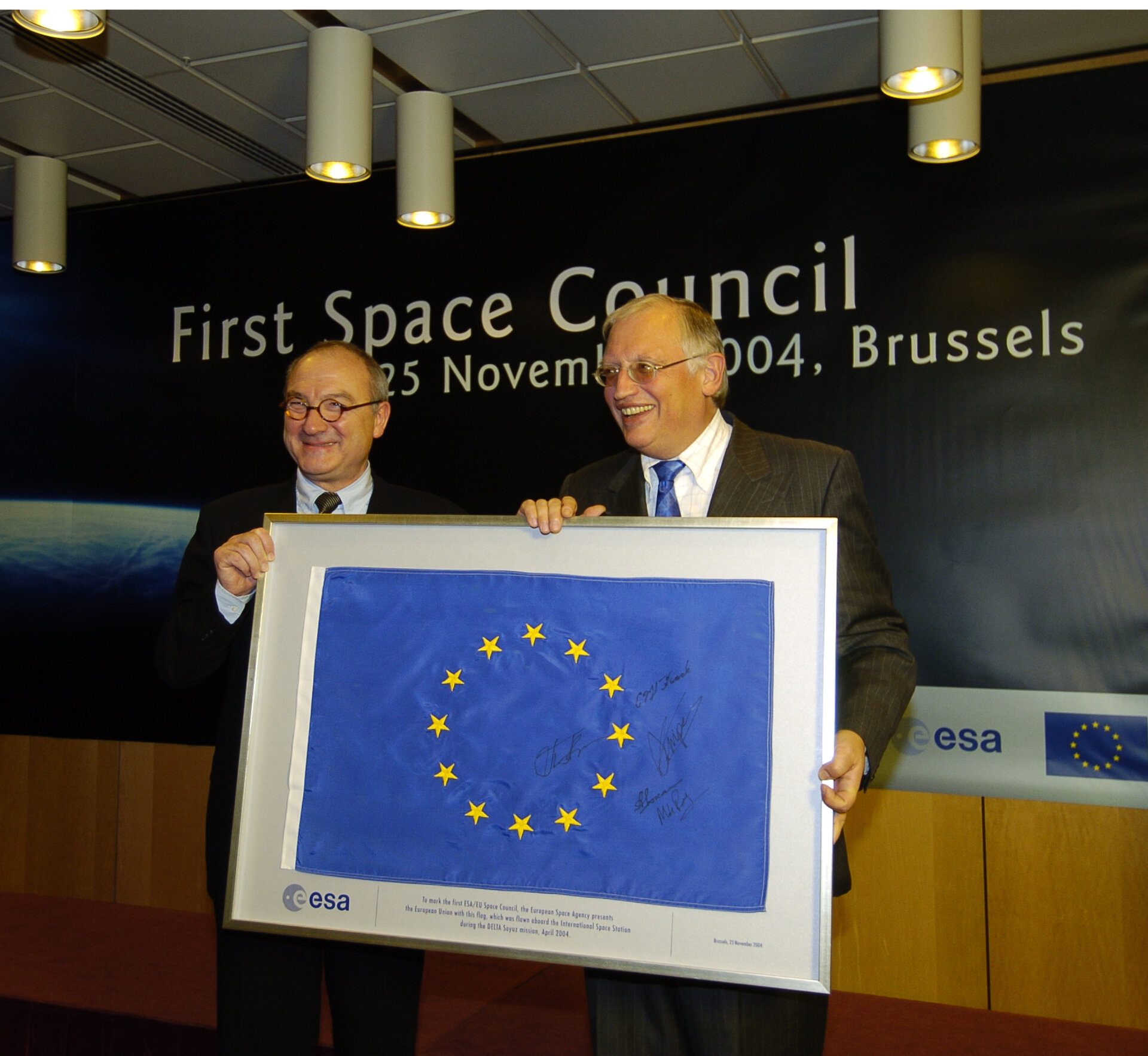 ESA PR 62-2004. The first ever European 'Space Council' was held in Brussels today. This is a major political milestone for Europe in Space, offering ministers representing the 27 European Union (EU) and/or European Space Agency (ESA) Member States the first opportunity to jointly discuss the development of a coherent overall European space programme.

In the footprint of the Treaty establishing a Constitution for Europe, signed by the Heads of State or Government of the European Union on 29 October and defining for the first time "space" as a shared competence of the Union, the Space Council acknowledges the importance of space activities for a wide range of European policies.

In today's meeting ministers recognised that it is essential to utilise the available resources in an efficient and effective way so that the supply of space-based services and infrastructures can meet the demand from users, such as the European Union's policies, Member States' policies and for the benefit of all European citizens. The ministers also agreed that the unique nature of the space sector requires the development of an appropriate industrial policy and public authorities close attention.

German Minister for Education and Research Edelgard Bulmahn, current chair of the ESA council at ministerial level, said: "This meeting was a great step forward for Europe's ambitions in space. Europe must federate its space efforts in order to better exploit the potential of space technologies for the well-being of its citizens. The European Space Programme will significantly strengthen Europe's role in this area of great economic and political importance".

Dutch Minister for Economic Affairs Laurens-Jan Brinkhorst, current chair of the EU Competitiveness Council said: "Today was a memorable day for European cooperation in Space. With the first EU-ESA Space Council Europe made a major step in the direction of a strong and coherent European Space Programme. Space technologies and applications will help Europe to reach its common goals in the field of i.e. competitiveness, environment and security. I am confident that our joint efforts will contribute to a strong and independent position for Europe in the global arena."

Commissioner for Enterprise and Industry Günter Verheugen said: "Today's first Space Council may not yet be a giant step for mankind. But the fact that we are drawing up a joint European Space Policy is a huge leap forward. Space is an area where the added value of a joint and coherent policy on the European level is very clear. The industrial dimension of space is key to increasing the competitiveness of European industry."

ESA Director General Jean-Jacques Dordain said: "The European Space Agency has long-standing experience of providing Europe's citizens with space-based solutions meeting their requirements. We are prepared to take up the new challenges that the future European space programme will ask us to accomplish".

The European space programme, to be defined in concept by the end of 2005, will constitute a common, inclusive and flexible platform encompassing all activities and measures to be undertaken by the EC, ESA and other stakeholders (e.g. national organisations) in order to achieve the objectives set in the overall European space policy.

To this end, a second "Space Council" meeting is planned for Spring 2005 to define general governance principles, identify priorities as well as the roles and responsibilities of all stakeholders and establish industrial policy principles.

The Space Council was established in order to coordinate and facilitate cooperative activities between the European Community and ESA through their Framework Agreement, which was adopted in 2003 and entered into force in May this year.

The EC-ESA Framework Agreement has two main aims. The first is the coherent and progressive development of an overall European Space Policy, which will specifically seek to link demand for services and applications using space systems in support of EU policies with the supply through ESA of space systems and infrastructures necessary to meet that demand. ESA is acting de facto EU implementing agency.

The second aim of the Agreement is to establish a common basis and appropriate practical arrangements for efficient and mutually beneficial cooperation between ESA and the European Community, fully respecting the institutional and operational frameworks of each institution, to facilitate the setting up of joint initiatives and to provide a stable framework for EC-ESA cooperation to benefit all European citizens.

Over the last three years, the EU and ESA have worked together to outline a European Space Policy that identifies and prioritises objectives for space. The European Space Programme – expected to be endorsed by a Space Council session at the end of 2005 – will constitute a common platform including all activities and measures to be undertaken by the EC, ESA and other stakeholders in order to achieve the objectives set by the European Space Policy.

The European Space Programme will be drawn up in light of the overall recommendations set out in the White Paper on Space, an action plan adopted by the European Commission in November 2003 for implementing an enlarged European Space Policy. Drafted in cooperation with ESA, the White Paper includes proposals for joint EC-ESA initiatives and takes the Framework Agreement as its basis for implementation.