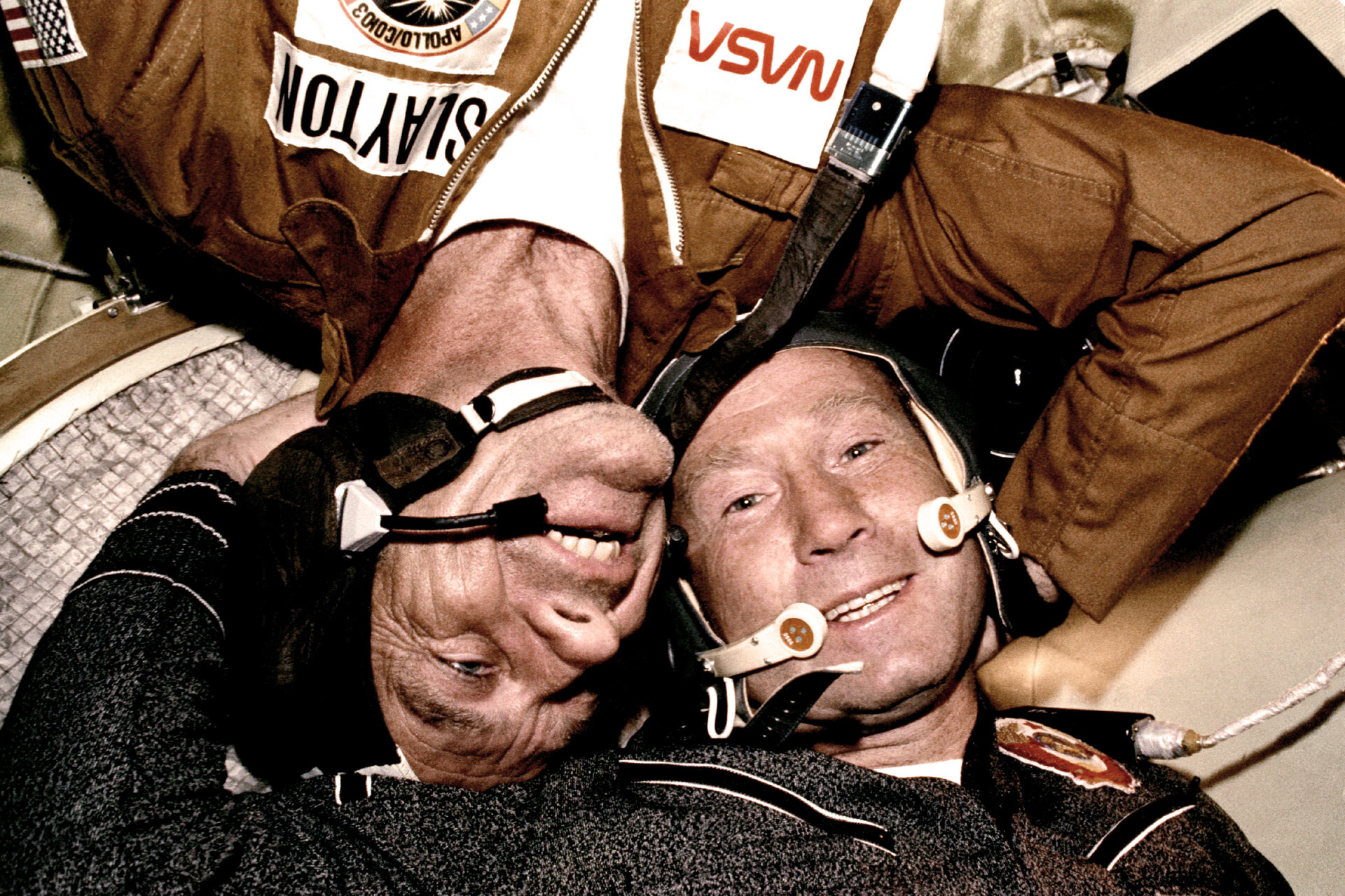 One of the first cosmonauts, Alexei Leonov trained with Yuri Gagarin. He gave the world a new perspective on human presence in space by being the first to venture into new territories: he made the first spacewalk, helped to end the US/Soviet space confrontation by shaking hands with a NASA astronaut in orbit and gave form to his memories through his paintings.

Alexei Arkhipovich Leonov was born on 30 May 1934 in the small town of Listvyanka, near Lake Baikal in Siberia. The eighth of a family of nine, he soon showed his skill in mechanics by building himself a bicycle from spare parts. He was also a talented artist. During World War II he spent hours at the local hospital sketching soldiers, officers and battle scenes.

After the war, the Leonov family moved to the newly conquered city of Kaliningrad – the former Königsberg. Young Alexei started drawing seascapes of the Baltic and when he enrolled at the Academy of Arts in Riga in 1953 it seemed that he was all set for a career as an artist.

Surprisingly, on leaving the Academy he joined the Chuguyev Air Force School in Kharkov, Ukraine, graduating in 1957 and qualifying as a parachute instructor in the Soviet Air Force after performing more than 100 jumps. During this time he did not forsake his art but continued his studies by attending evening classes. A keen sportsman, he also practiced fencing, volley ball and sailing.

As an athletic and agile parachutist, as well as a competent pilot, Leonov soon came to the attention of a screening commission who told him he was under consideration for 'something new and very, very difficult'.

In March 1960 he was selected for the first corps of Soviet cosmonauts with 19 others, including Gagarin. Originally he was considered as a pilot for Vostok 1 but then became back-up for Vostok 5. His goals were much higher however, he made no mystery of the fact that he wanted to be the first man on the Moon.

Finally he was selected to fly on Voskhod 2, a two-seat version of Vostok, with Pavel Belyayev. The main objective of the mission was to carry out a spacewalk before the US astronauts could do so from their new Gemini capsule. The mission was launched on 18 March 1965. Since the Voskhod could not be depressurised, an inflatable airlock was deployed from the hatch. On the second orbit, Leonov entered the airlock to leave the spacecraft and venture outside.

This first extravehicular activity (EVA) in history lasted 12 minutes and rapidly turned into a nightmare for the cosmonaut. The spacesuit was rigid under pressure and made any movement highly difficult. He could not take pictures as planned and the cord connecting him to the spacecraft became twisted sending him tumbling. With great difficulty he managed to reenter the airlock but then became stuck and unable to close the hatch behind him.

Without reference to the ground station he opened the valves on his suit to reduce the inner pressure to 0.27 bar, sufficient to regain enough flexibility to close the airlock. When he finally reentered the space capsule he was exhausted and several litres of sweat would be recovered from his spacesuit on his return to Earth.

Unfortunately the return did not go as planned either. The primary retrorocket misfired and the backup had to be activated. Then the service module failed to separate and burnt on reentry. The destabilised capsule ended up landing in the Urals, way beyond the recovery area. The two cosmonauts had to spend a night in forest surrounded by wolves, before being rescued the next day.

Aiming at the Moon

By late 1966, Leonov’s success has been largely surpassed by the US EVAs conducted during the Gemini programme, and the Soviet Union was eagerly trying to score new ‘firsts’ in the space race. Alexei Leonov commenced training for a circumlunar flight on a modified Soyuz vehicle.

Unmanned rehearsals were successfully flown in September and November 1968, and he was ready for the first manned mission around the Moon, scheduled for February 1969. Unfortunately, NASA speeded up its own plans and sent Apollo 8 to the Moon in December 1968. Unlike Apollo, the Russian vehicle would be unable to enter actual lunar orbit and the programme was cancelled.

Since early 1968 Leonov had been training for a more ambitious mission. He was one of the three cosmonauts selected to pilot the LK, a small lunar lander that the Soviets wanted to send to the Moon on top of their gigantic N1 rocket before late 1970. But this Soviet equivalent of the mighty Saturn V suffered two dramatic launch failures.

The second in July 1969 occurred only three weeks before the dramatic success of Apollo 11 and destroyed the launch complex in Baikonur. The Soviet manned lunar programme was shelved and Leonov’s last hopes to land on another world vanished.

Following Apollo 11, the Soviet Union redirected its priority in space toward the development of space stations in low Earth orbit. The Salyut programme was organised within a few months based on hardware initially designed for military purposes. Leonov trained with Pyotr Kolodin and Valeri Kubasov, the first cosmonaut to weld in space, for the second expedition to Salyut 1.

The station was successfully launched on 19 April 1971 to celebrate the 10th anniversary of Gagarin’s flight. The first crew was sent on Soyuz 10 but could not enter the station due to a faulty hatch and had to return to Earth. Leonov and his crew prepared to launch on Soyuz 11 but then Kolodin failed a medical review just three days before launch.

The whole crew was changed with the back-up crew of Georgi Dobrovolsky, Vladislav Volkov and Viktor Patsayev, which successfully spent three weeks on Salyut 1 establishing a new flight duration record. Tragically, they all died of suffocation when returning to Earth, due to a faulty valve on their return module.

Leonov and his crew were reassigned to a mission on Salyut 2, but the new station failed shortly after launch in July 1972. A third station was launched in May 1973 but only just reached orbit.

Leonov and Kubasov were then named the prime Soviet crew for the Apollo-Soyuz Test Project in mid-1973, undergoing training both in Russia and at NASA’s Johnson Space Center. On 15 July 1975 they lifted off on Soyuz 19, an improved Soyuz spacecraft featuring an androgynous docking collar.

For the first time a Soviet launch was broadcast live worldwide and two days later they rendezvoused with the last of the Apollo spacecraft, also fitted with a similar androgynous docking adapter.

On 17 July at 19:19 GMT, the hatches between the Soviet and US spacecraft were opened and Leonov shook hands with NASA astronaut Thomas Stafford. The two crews conducted joint experiments for two days before separating. It would be 19 years before a US and a Russian spacecraft docked together again.

On his return, Leonov was named head of the cosmonaut corps but he resigned in January 1982 to become deputy director of the Gagarin Cosmonaut Training Centre in Moscow – known as 'Star City'. After retiring in 1991 he became vice president of Alfa Bank, the largest private commercial bank in Russia.

Throughout his career, Leonov never stopped drawing and painting. He even took coloured pencils and paper into space with him to create the first eyewitness sketches of Earth from space. During the Apollo-Soyuz mission he presented the Apollo crew with their portraits he sketched during the mission. Leonov has published many books and his paintings, presenting his personal vision of space travel, have been shown worldwide.

Leonov has been awarded numerous honours, among which having a 33-km diameter crater on the far side of the Moon named after him as well as a Main-belt asteroid (5154 Leonov) and the fictional spaceship exploring Jupiter in Arthur C. Clarke’s novel 2010: Odyssey Two.