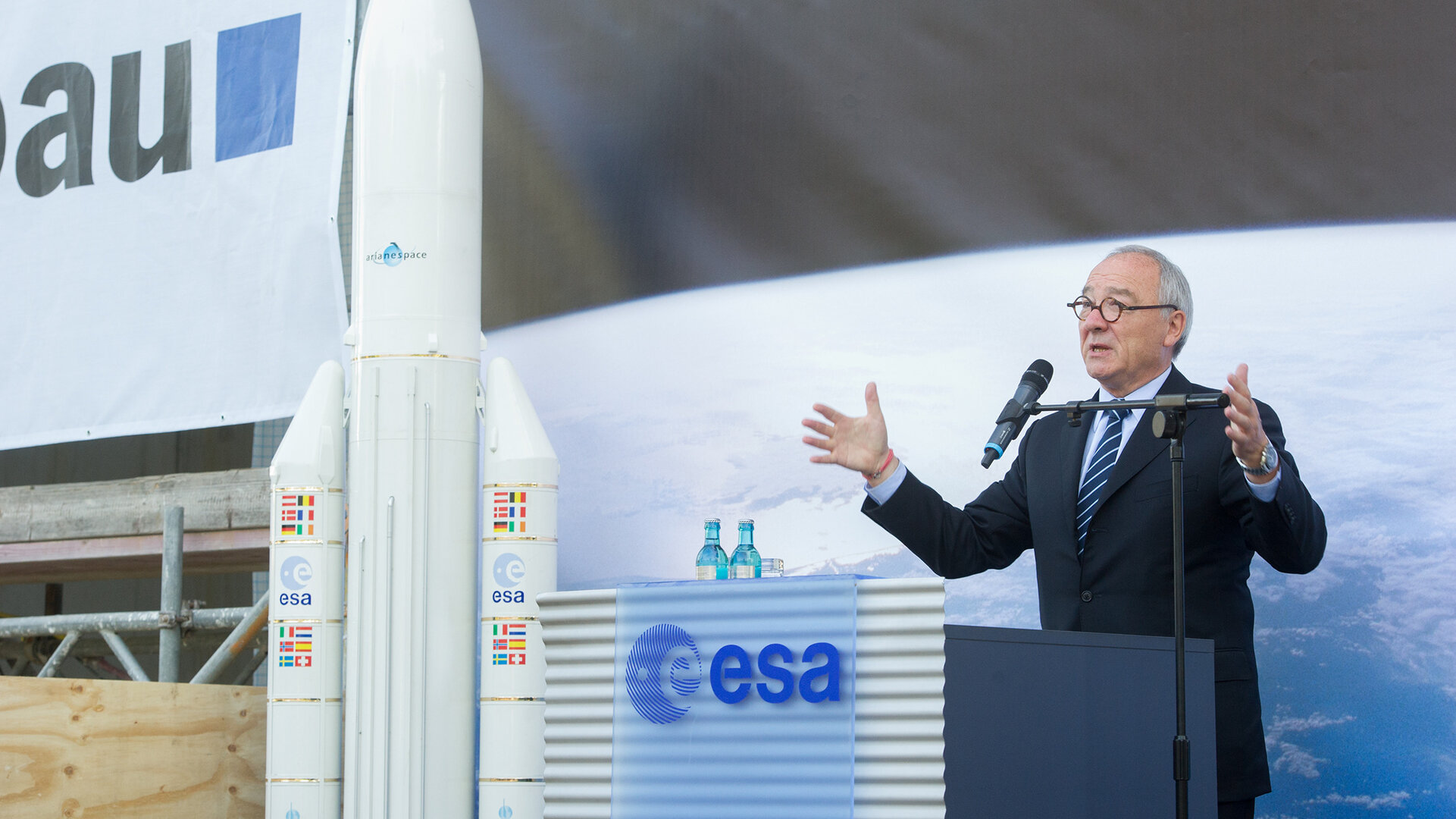 The expansion of ESA’s operations centre in Darmstadt, Germany, was in the spotlight today in preparation for upcoming Earth observation, planetary exploration and astronomy missions. The enlarged site will also support enhanced technical research and development in areas such as space debris.

On 4 September, a ‘Richtfest’ – a traditional way of thanking the construction team for its work – was celebrated for the new buildings on the ‘ESOC II’ site, marking a significant milestone in the expansion of ESOC. The event followed completion of the roof and outer shell of the first structure, located on newly provided land across the street from the main gate of ESOC in the west end of Darmstadt.

Two new buildings will provide up to 250 administrative workspaces, freeing up space for the future development of the satellite control facilities located on the present campus.

The expansion will enable ESOC to support a growing range of new missions, including Gaia, ExoMars, the Sentinels and EarthCare.

The ceremony was hosted by ESA Director General Jean-Jacques Dordain and Thomas Reiter, Director of Human Spaceflight and Operations and Head of the ESOC Establishment.

"ESOC is a true success story; no major ESA mission in the past decades would have been possible without our outstanding spacecraft operations experts," said ESA Director General Dordain.

The first phase of the ESOC modernisation and expansion project, which includes the new buildings, valued in total at €24 million, is being funded by €9.5 million from the German Government and €2 million from the State of Hessen.

The expansion of ESOC provides a significant boost to ESA’s activities in Germany and highlights the growing importance of space in the region and to Europe overall.

The new building initiative stems from intensive cooperation in recent years between the German Ministry of Economics, the State of Hessen, the city of Darmstadt and ESA.

"This is a great day for Europe in space. The German government is very pleased with the achievements of ESA as Europe's space agency," said German State Secretary Hans-Joachim Otto.

"The extension of this operations centre is a key element in our commitment to ESA."

The expansion will also support ESOC’s growing activities related to specialised software, which is being adopted by a wide range of European industry, value-added navigational services and advanced technology development.

Work is continuing on the two new modern, energy-efficient buildings, which should be ready for occupancy in early summer 2014.