Europe’s students and young researchers were challenged to design a smartphone app to take advantage of Galileo’s dual-frequency signals. The winning entries should soon be available to the public.

Run by ESA in collaboration with the European Global Navigation Satellite Systems Agency – GSA – plus the European Commission with the support of Google, a total of five teams made it to the final, which took place at ESA’s ESTEC technical heart in the Netherlands.

Following on from last year’s inaugural competition – which has already resulted in the winning app becoming publicly available – this year’s event challenged teams to make use of the dual-frequency capability of the latest smartphones running Android 8.0, including and computing dual-frequency positioning solutions from satnav signals to compare them with their single frequency equivalents. The competition slogan was ‘Galileo give mE5’, referring to Galileo’s dual E1 and E5 frequencies.

The objective of the competition was to reach metre-accuracy–or-less worldwide in unobscured sky, while allowing the user to select Galileo-only positioning, GPS-only positioning and the combination of both on a simultaneous basis, with the potential to include other satnav constellations in turn.

The winner was selected based on technical checks and a jury’s vote. Separate awards were also given to the most innovative app and the winner of a public vote.

The app allows users to perform reliable positioning fixes in real time – selecting which constellations to employ and a choice of single or dual frequency signals – while advanced users can modify the way the positioning is performed, and log all available data for follow-up analysis.

“Our mission goal is to provide precise positioning to everyone,” explained team coordinator Lotfi Massarweh. The O ThiSaVRoS team performed analysis on more than 120 hours of data from stationary, pedestrian and mobile testing to come up with a pre-processing approach involving rejection of signals from low elevation and under a specific signal-to-noise ratio.

The five-person team hail from China, Greece, Italy and Spain, studying at Portugal's Instituto Superior Técnico Lisboa, Delft University of Technology in the Netherlands, Germany’s Leibniz Universität Hannover and the Universities of Bath and Nottingham in the UK. They worked remotely to develop and test the app over the previous six months.

Second place went to the ESTEC-based Team GNSS Tonic’s NavGate app – aimed at bringing people together socially to interesting locations. Users can tag sites of interest to be seen by other people, with the resulting geotags viewable for others either on a map or else directly in augmented reality through their phone’s camera. NavGate could potentially be used for everything from sharing dining recommendations to fishing spots, or meeting up with people during an evening out.

The third prize to the Step with GNSS app by the Romania-based Space Walkers Team, designed to gather data on the paths of users walking outdoors. This game based app is backed up by a server application collecting data from the app users and analysing GNSS performance worldwide or regionally.

The winner of both the public vote and the most innovative app award went to Universitat Autònoma de Barcelona’s Inari Team and their Inari app.

Inari allows users to select various positioning modes or customise their own, selecting which algorithms and which corrections should be employed as well as specifying constellations and signal frequency. The app can also highlight jamming or spoofing that might be influencing the positioning accuracy.

ESA’s technical evaluation team performed tests of the competing apps in the days running up to the final, including tracing out ‘ESA GALILEO’ as accurately as possible across the establishment’s football field.

The speaker of the jury, Frank van Diggelen from Google congratulated the teams on their efforts: “Dual frequency on smartphones is a quite new development, and you really are pioneers in this. The manufacturers are still trying to get things right, and you’re helping them do that bit better. Doing anything for the first time is hard but it’s good to be first, so congratulations for that.”

The receiver chipsets inside smartphones routinely make use of Galileo in combination with several other satnav constellations – the US GPS, Russian Glonass and Chinese BeiDou. These chipsets function in ‘black box’ style, making the resulting positioning fixes accessible to users, but without giving any option to the user to select which constellation to employ – or information on Galileo’s particular contribution to the phone’s overall positioning performance.

However, in newer Android smartphones it has become possible to access the raw signal measurements used to compute position, opening the door to the development of applications where the user can indeed select which constellations to employ.

The very latest models also allow the use of dual satnav frequencies, giving a major boost to positioning precision. The higher chip rate of the additional frequency allows the chipset to compensate for signal propagation errors from the signals’ journey through the ionosphere – the electrically active outer layer of atmosphere – and reduces false ‘multipath’ detections caused by signals reflecting off buildings. 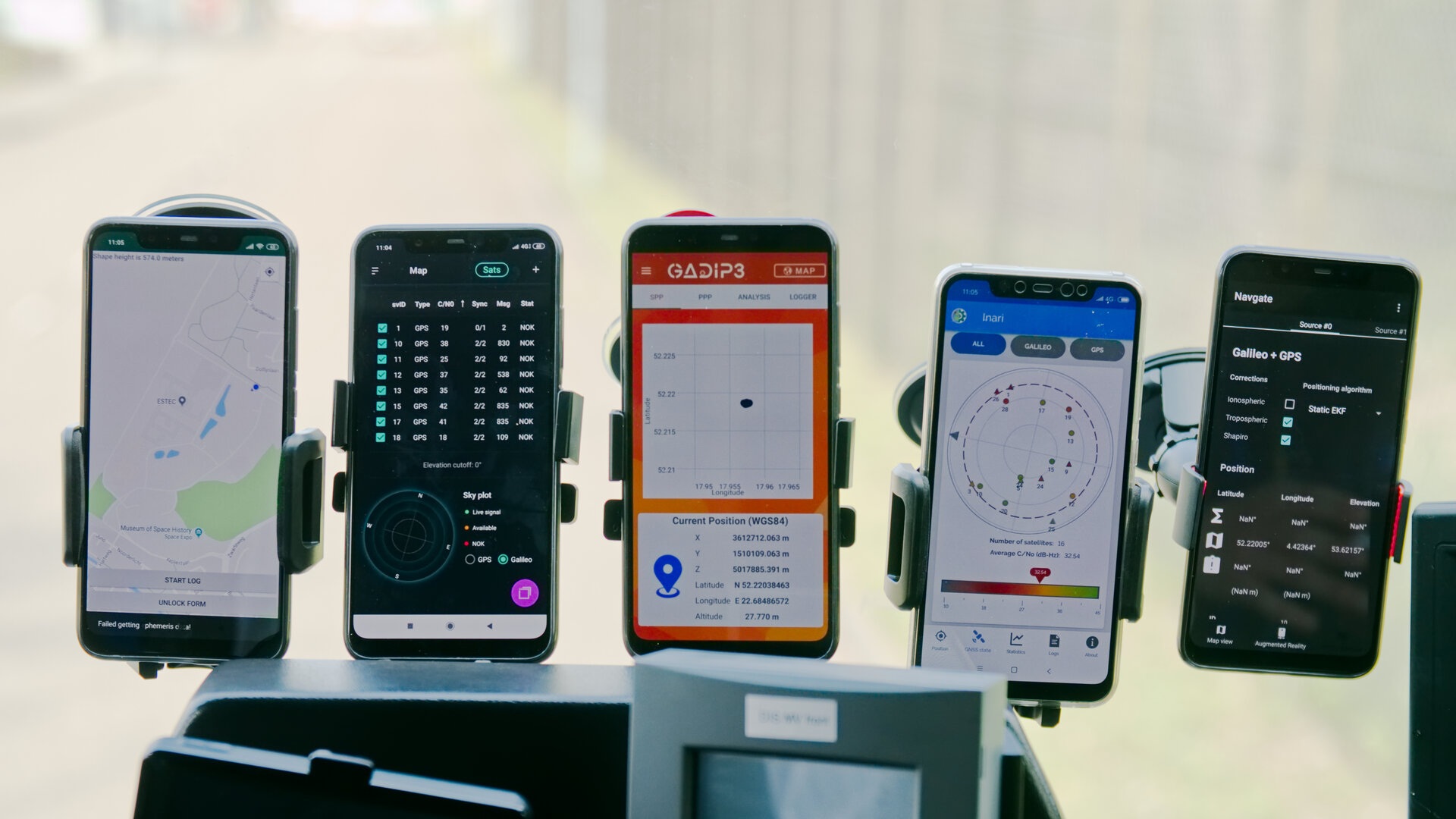