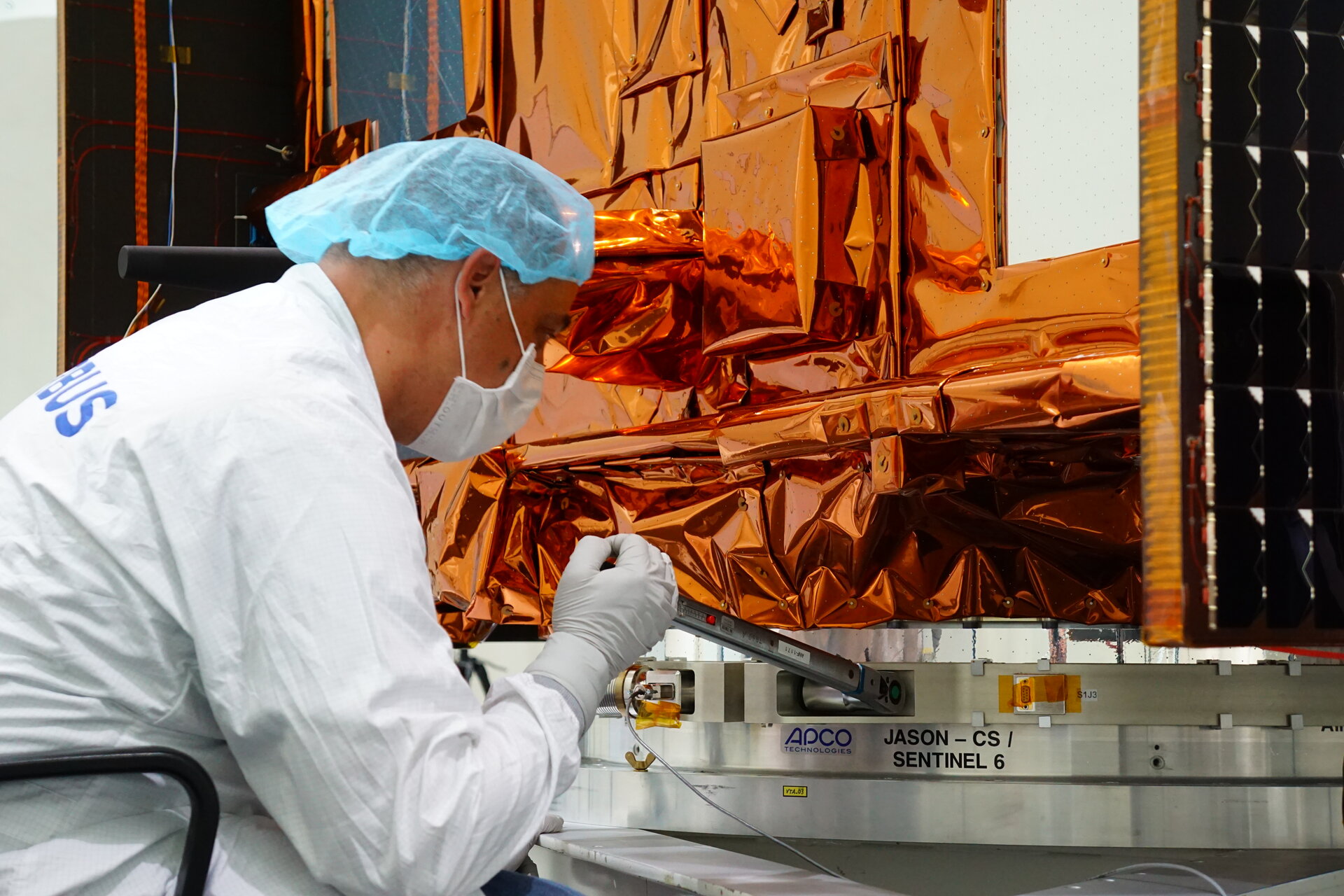 During these unprecedented times of the COVID-19 lockdown, trying to work poses huge challenges for us all. For those that can, remote working is now pretty much the norm, but this is obviously not possible for everybody. One might assume that like many industries, the construction and testing of satellites has been put on hold, but engineers and scientists are finding ways of continuing to prepare Europe’s upcoming satellite missions such as the next Copernicus Sentinels.

For example, with liftoff still scheduled for the end of this year, the Copernicus Sentinel-6 Michael Freilich satellite is currently being tested to ensure that it will withstand the rigours of launch and the harsh environment of space during its life in orbit around Earth.

This new satellite will assume the role as a reference mission to provide critical data for the long-term record of sea-surface height measurements.

As one of the most severe consequences of climate change, global sea level is rising – putting millions of people at risk. It is essential to continue measuring the changing height of the sea surface to monitor this worrying trend so that decision-makers are equipped to take appropriate mitigating action.

The constraints imposed by the COVID-19 crisis mean that there are far fewer engineers in the cleanroom. However, complying with isolation measures, Airbus, the prime contractor for the mission, has a team testing the satellite at IABG’s centre near Munich in Germany in order to keep to schedule.

Pierrik Vuilleumier, ESA’s Copernicus Sentinel-6 mission project manager, said, “The current situation has meant that many of us are having to follow the test campaign remotely. Since this is an international mission, people are scattered across Europe and the US.

“Remarkably, we have reached an important milestone completing the acoustic vibration tests, which simulate the noisy environment of liftoff and ascent through the atmosphere. This just shows how the team is determined to meet the launch date in November, despite the difficult circumstances.”

Copernicus Sentinel-6 is now set for the next set of tests, which includes the ‘electro-magnetic compatibility’ tests. With these complete, at the end of September, it will be transported to the Vandenberg Air Force Base in California for liftoff on a NASA-provided Space-X Falcon 9 rocket.

Sentinel-6 Michael Freilich is being jointly developed by ESA, NASA, the European Organisation for the Exploitation of Meteorological Satellites and the National Oceanic and Atmospheric Administration, with support from the Centre National d'Etudes Spatiales.

Despite COVID-19 another milestone has also been reached – this time for the Copernicus Sentinel-3 mission, with the transport of the ‘D’ satellite platform from Thales Alenia Space in Rome, Italy, to Cannes in France.

There are currently two Sentinel-3 satellites in orbit: Sentinel-3A and Sentinel-3B. They work as a pair to measure systematically Earth’s oceans, land, ice and atmosphere to monitor and understand large-scale global dynamics, and to provide essential information in near-real time for ocean and weather forecasting.

To ensure continuity, they will eventually be replaced by Sentinel-3C and Sentinel-3D. Therefore, work is ongoing to prepare these next satellites.

Nic Mardle, ESA’s Copernicus Sentinel-3 project manager, said, “At the start of the restrictions the Thales team in Italy worked particularly hard to try to complete everything for Sentinel-3D before a full lockdown was imposed. Single shifts with no hand-over allowed two teams to continue working on the satellite with no risk of infecting each other.

“They were almost complete when the full shutdown of the facilities was announced, but this did not stop the Thales teams in Italy and in France and us at ESA, as we all continued by working remotely to get though the all-important ‘Delivery Review Board’.

As soon as Thales’ facilities could be accessed again, the teams completed the few final activities including the packing and shipment preparations and finalised the necessary approvals from Italian and French governments, so that the satellite platform could be transported by road from Italy to France.

Sentinel-3D arrived safely at the Cannes facilities in the night of 21 April and was unpacked by the Thales-Alenia Cannes team with the remote support from their colleagues in Rome.

Nic added, “Activities are definitely more complicated in this period, but all teams are working together to facilitate the continuation of the programme in the most efficient and pragmatic way, finding solutions to the new problems caused by the impacts the virus, while ensuring that the health and safety of the teams involved is ensured.”

“This is not only vital to ensure the continuity of measurements of our planet from space to understand and monitor environmental changes that are affecting society worldwide, but also we need to keep demonstrating new space technologies for the future. And, with COVID-19 affecting the economy so badly, we are making every effort to keep the space industry and downstream ventures in business.”