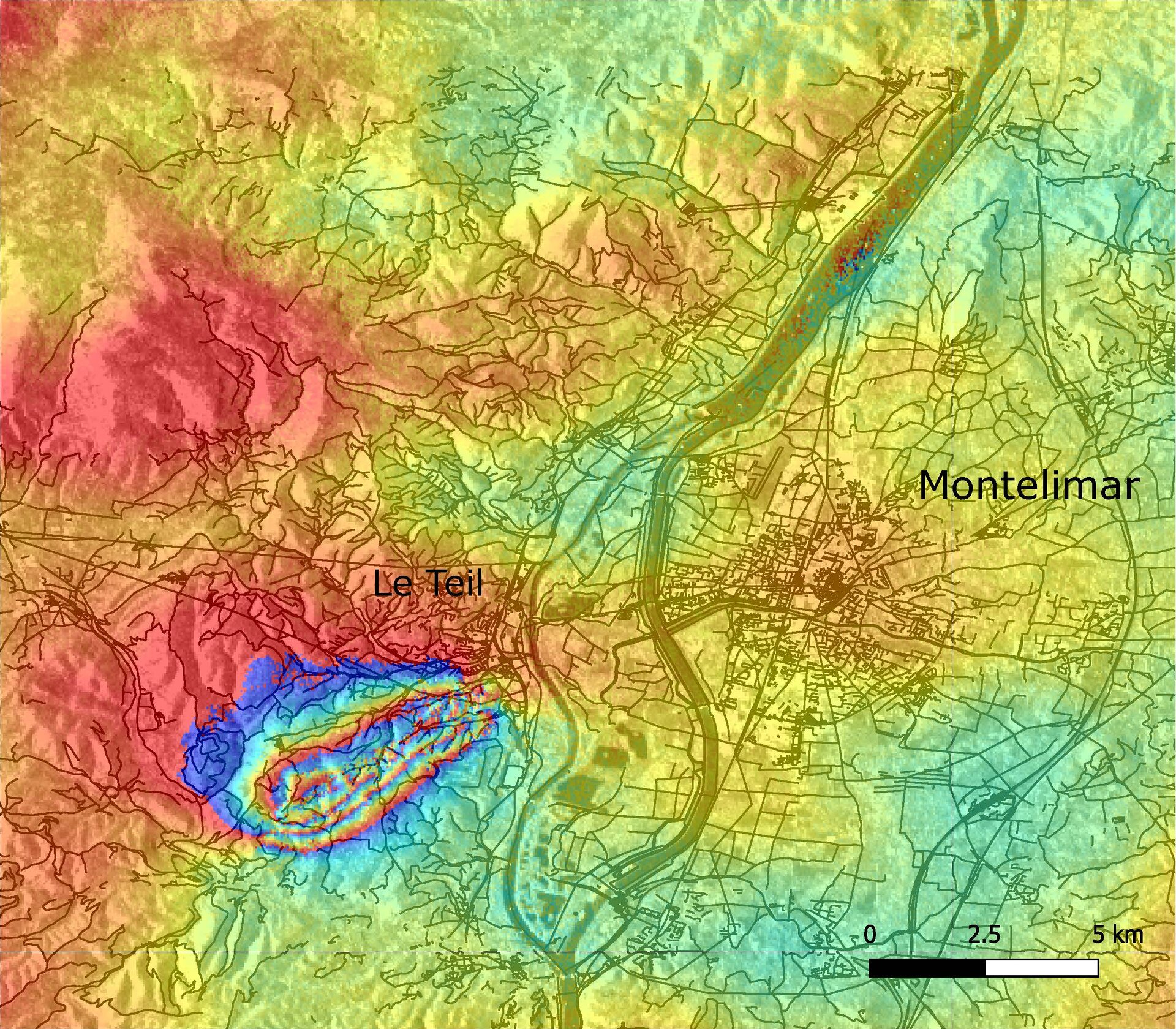 This week, southeast France was hit by a magnitude 5 earthquake with tremors felt between Lyon and Montélimar. The Copernicus Sentinel-1 radar mission has been used to map the way the ground shifted as a result of the quake.

Earthquakes are unusual in this part of France, but on 11 November at noon (local time) part of the Auvergne-Rhône-Alpes region was rocked by a quake leading to people having to be evacuated and buildings damaged.

Scientists are turning to satellite-based radar observations to help understand the nature of the seismic fault and map its location.

By combining imagery acquired before and after a quake, changes on the ground that occurred between the two acquisition dates lead to rainbow-coloured interference patterns in the combined image, known as an ‘interferogram’, which allows scientists to quantify ground movement.

An acquisition by Copernicus Sentinel-1 was made on 12 November, one day after the event, and was ready to process on ESA’s Geohazards Exploitation Platform (GEP), which is a cloud-based processing environment with on-demand terrain motion mapping services.

Several users have computed interferograms over the concerned region.

While several faults are present in the region and marked in geological maps, none were known to be seismically active. The interferogram here shows a series of fringes in the area west of the city of Le Teil and has allowed scientists to identify the fault at the origin of the earthquake. The satellite observation also measured a ground displacement that corresponds to an uplift of up to 8 cm in the southern part of the fault.

The intensity of the ground motion felt by the inhabitants and measured from space is unusual for this magnitude of event unless the earthquake epicentre is shallow and, indeed, seismic data put the epicentre at between 1 km and 3.5 km below the surface. Observations in the field on 13 November suggest that the rupture propagated up to the surface.

Floriane Provost, Research Fellow at ESA, said, “The rapid release to the public of up-to-date Copernicus Sentinel-1 based products visualised in a friendly fashion on the GEP geobrowser was followed by a peak of connections. It helped the scientific community better map the location of the fault and to confirm the mechanism of the earthquake.

“This example shows how the GEP environment contributes to the rapid processing and exchange of information within the geohazards community.”

Michael Foumelis, researcher at the French Geological Survey BRGM, added, “Field investigations by BRGM experts are on-going, while interferometric synthetic aperture radar results are actually helping them to correlate the distribution of damage with the location of the activated fault and measured ground displacements.”