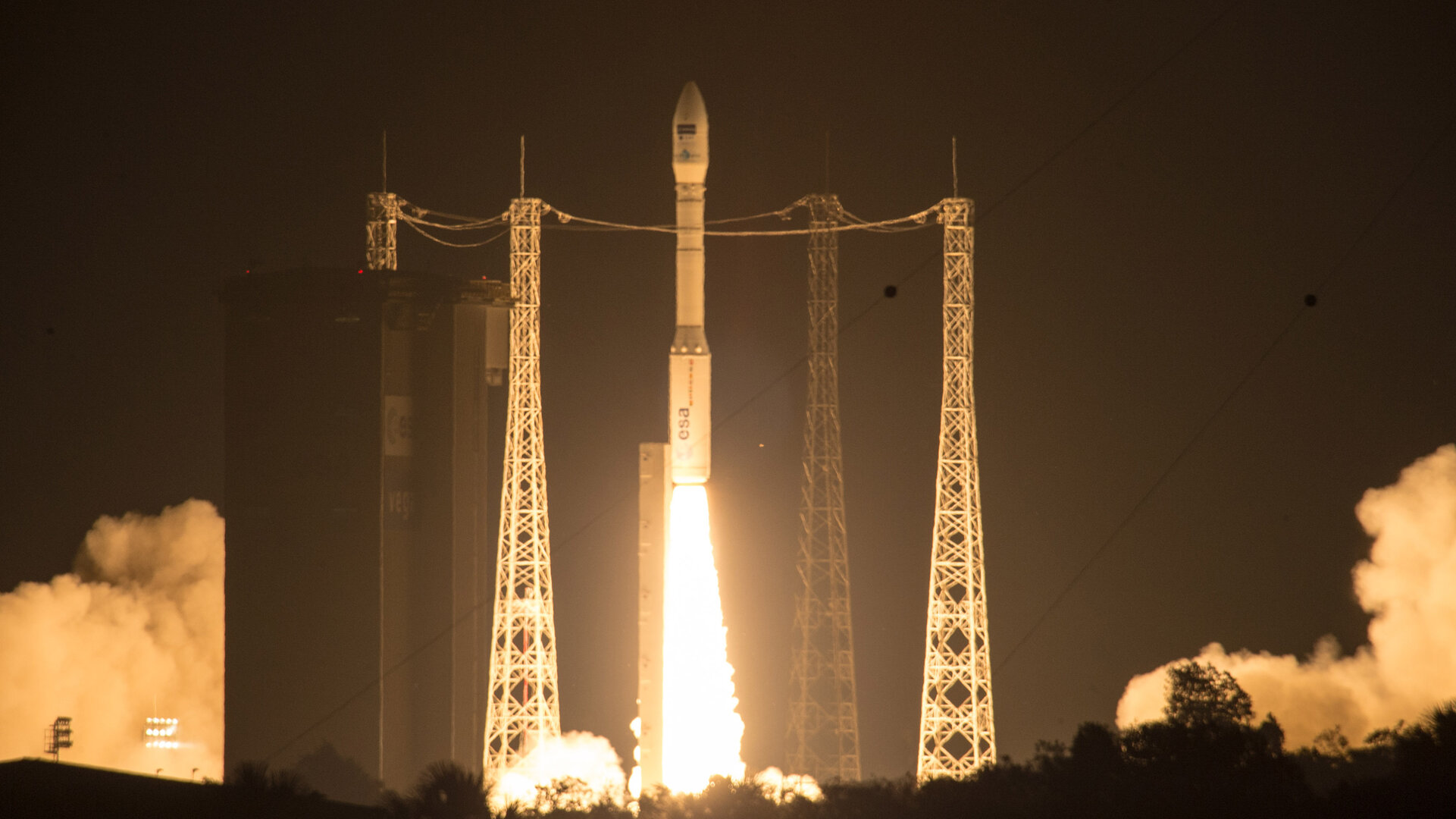 The first stage separated 1 min 52 sec after liftoff, followed by the second stage and fairing at 3 min 37 sec and 3 min 54 sec, respectively, and the third stage at 6 min 32 sec.

After a first ignition, 7 min 42 sec after liftoff, followed by two reignitions, Vega’s upper stage delivered Sentinel-2A into the targeted Sun-synchronous orbit. The satellite separated from the stage 54 min 43 sec into the flight.

Telemetry links and attitude control were then established by controllers at ESA’s operations centre in Darmstadt, Germany, allowing activation of Sentinel’s systems to begin. The satellite’s solar panel has already been deployed.

After this first phase, which typically lasts three days, controllers will begin checking and calibrating the instruments to commission the satellite. The mission is expected to begin operations in three or four months.

Six families of Sentinel satellites will make up the core of EU’s Copernicus environmental monitoring network. An EU flagship space initiative, Copernicus will provide operational information on the world’s land surfaces, oceans and atmosphere to support environmental and security policymaking, and meet the needs of citizens and service providers.

“Sentinel-2 is the second satellite of a constellation of 20 satellites which will scrutinise planet Earth and will vastly improve the ability of Copernicus to provide European citizens with the most comprehensive data for environmental and security applications available anywhere in the world,” noted ESA Director General Jean-Jacques Dordain.

Sentinel-2A will complement the all-weather, day-and-night radar imagery provided by the first in the fleet, Sentinel-1A, launched on 3 April 2014.

“Sentinel-2A, with its optical camera, is a complement to the radar images from Sentinel-1A,” said Volker Liebig, ESA’s Director of Earth Observation Programmes. “It will support important areas of benefit to society such as food security and forest monitoring.

“Its combination of wide swaths and short revisit time will allow users to view land change and vegetation growth with unprecedented accuracy.

“By frequently revisiting areas, it will allow a new generation of operational products, from land cover and change detection maps, disaster maps and leaf area index to chlorophyll content and other bio-geophysical variables.”

Data will be provided on a free and open basis. Raw data will be analysed, processed and harmonised by public and private sector service providers.

Sentinel-2B, its twin satellite, is scheduled for launch in mid-2016.

14 Sentinel satellites are currently planned. In addition, Sentinel-4 and Sentinel-5 will be carried as payload on six meteorological satellites.