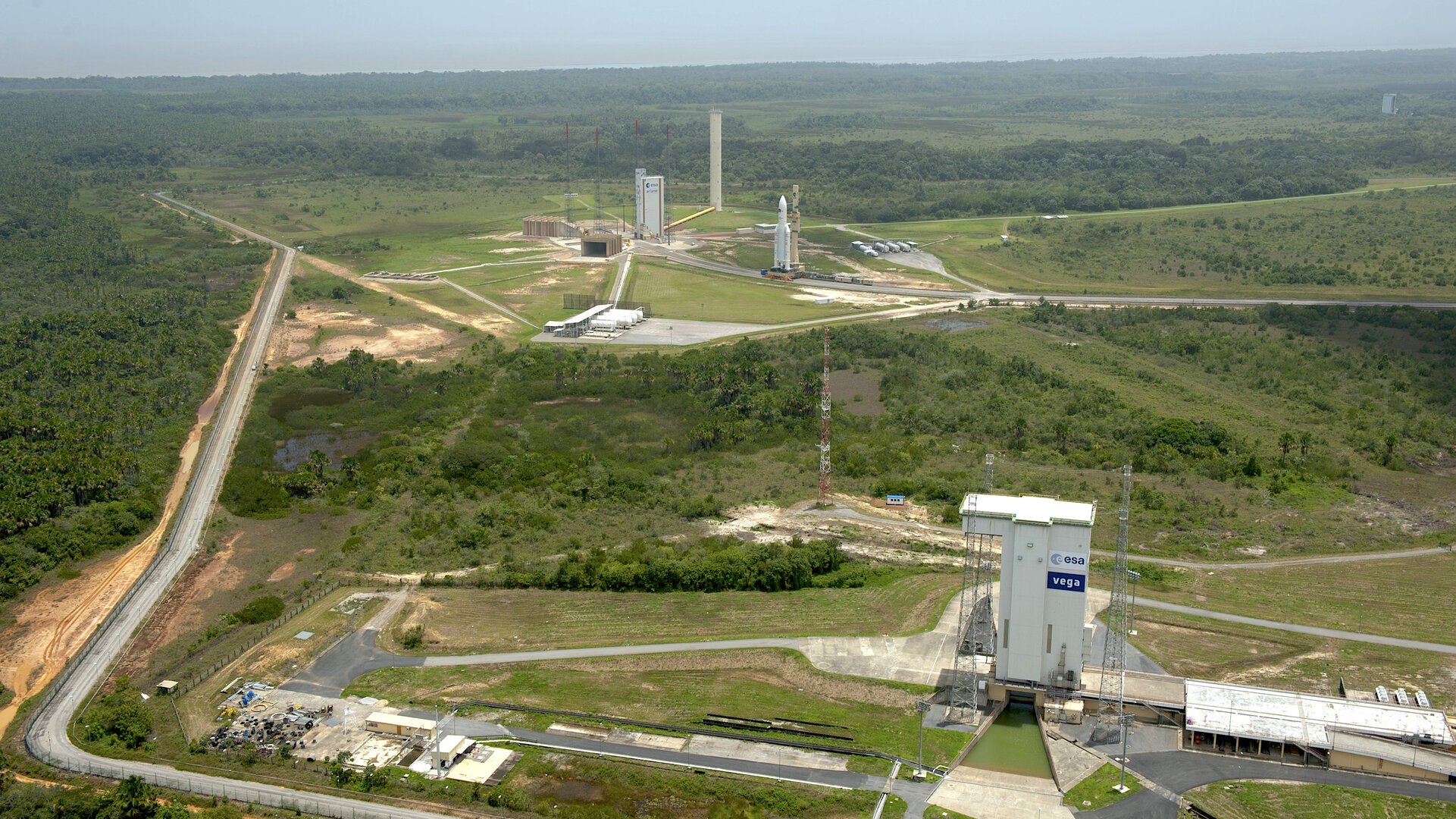 Europe's Spaceport is situated in the northeast of South America in French Guiana, an overseas department of France.

In 1964 the French Government chose Kourou, from 14 other sites, as a base from which to launch its satellites. When the European Space Agency came into being in 1975, the French Government offered to share its Centre Spatial Guyanais (CSG) with ESA. For its part, ESA approved funding to upgrade the launch facilities at the CSG to prepare the Spaceport for the Ariane launchers under development.

Since then, ESA has continued to fund two thirds of the spaceport's annual budget to finance the operations and the investments needed to maintain the top level services provided by the Spaceport. ESA also finances new facilities, such as launch complexes and industrial production facilities, for new launchers such as Vega-C and Ariane 6.

Kourou lies at latitude 5°3', just over 500 km north of the equator. Its nearness to the equator makes it ideally placed for launches into geostationary transfer orbit as few changes have to be made to a satellite’s trajectory.

Launchers also profit from the ‘slingshot’ effect, that is the energy created by the speed of the Earth’s rotation around the axis of the Poles. This increases the speed of a launcher by 460 m per second. These important factors save fuel and money, and prolong the active life of satellites.

Thanks to its geographical position, Europes Spaceport offers a launch angle of 102°, enabling a wide range of missions from east to north. In fact, Europe’s Spaceport is so well placed that it can carry out all possible space missions.

Safety is equally important. French Guiana is scarcely populated and 90% of the country is covered by equatorial forests. In addition there is no risk of cyclones or earthquakes.

The high levels of efficiency, safety and reliability at Europe’s Spaceport are well known. In addition to its many European clients, the spaceport also undertakes launches for industries in the United States, Japan, Canada, India and Brazil.

To date, ESA has invested more than €2 billion in improving and developing the ground facilities at Europe’s Spaceport. ESA owns the special infrastructure built for the Ariane, Soyuz and Vega launchers, this includes launcher and satellite preparation buildings, launch operation facilities and a plant for making solid propellant and integrating solid rocket motors.