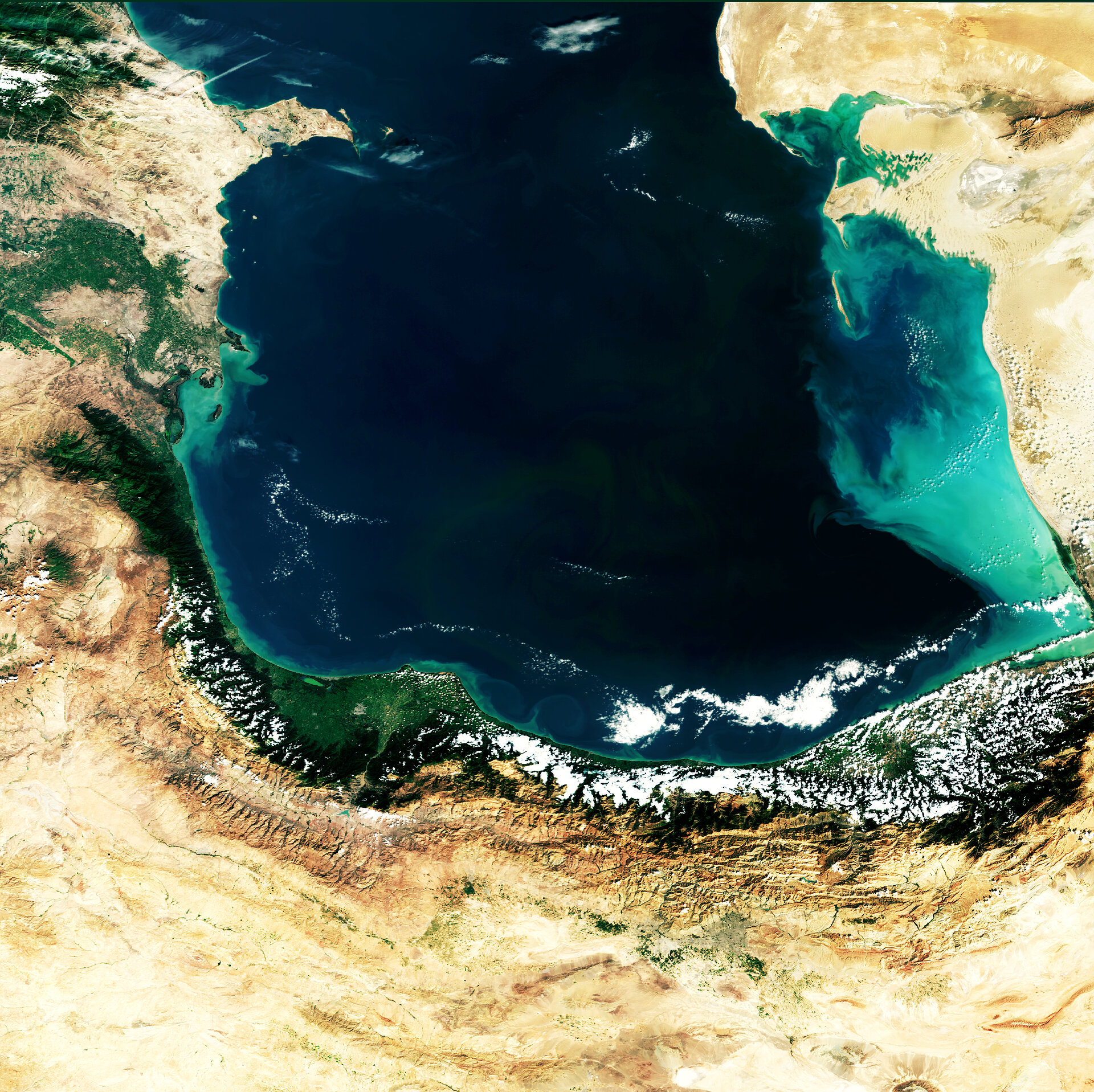 Variously classed as the world's largest lake or the smallest full-fledged sea, the Caspian is the largest landlocked water body in the world, with a total surface area of 371 000 square kilometres.

Stretching 1200 km from north to south, the almost tide-free Caspian Sea fills a deep depression between Europe and Asia, its water level being around 28 metres lower than global sea level. Its waters are not freshwater but salty – although only about a third as much as true seawater. Its salinity is an inheritance from its origin as a remnant of the ancient Tethys Sea.

The Caspian is bordered by Russia and Kazakhstan to the north, Azerbaijan to the west, Turkmenistan to the east and Iran to the south.

The Sea's water levels have fluctuated in the last few decades, a development at least partly due to human activity including the building of dams. It fell during the 1960s and 1970s, has risen since then, but may now be falling again. This part of the Caspian includes the deepest section, the colour of the water in the image being a hint to the Sea's bathymetry. The Caspian Sea's maximum depth is 980 metres, on the western side, with a shallow sub-100-metre shelf to the eastern side. Compare it to the previous image of the Caspian's shallow 10-metre-deep northern end.

The enclosed nature of the Caspian means it is home to some unique animals and plants, but it is also vulnerable to pollution from agriculture and industry – particularly oil. The Caspian Basin is rich in oil deposits; the oil centre of Baku, capital of Azerbaijan, seen in light grey on the southern side of the Apsheron Peninsula jetting out from the western shore. Baku lies at the eastern end of the recently opened Baku-Tbilisi-Ceyhan pipeline, which transports oil 1762 kilometres to the shores of the Mediterranean for use by Europe.

Across from Baku on the other side of the Caspian is the country of Turkmenistan, its territory dominated by the Karakum Desert. The Uzboy (Uzboi) River once ran into the Caspian Sea at this point but dried up following a catastrophic drought in the 17th Century. Today it is only an intermittent stream.

Also notable is Iran's Alborz (Elburz) mountain range, adjacent to the green Gilan-Mazanderan lowlands on the Caspian's southern shores. The Alborz range includes Iran's highest peak, the 5604-metre Damavand inactive volcano which is also the highest mountain in West Asia and the Middle East. Damavand is located south of the most southerly extremity of the Caspian. To highlight its location, a small patch of snow can be seen on its southern side.

Southwest of the mountain is Iranian capital Tehran, 100 km from the shores of the Caspian, and is just visible as a grey area, about a third of the image in from its right edge, just northwest of the most southerly patch of greenery. The Alborz mountain range acts as a barrier to rain clouds moving south, explaining the contrast between the fertile lowlands to the north and the desert to the south.

This image was acquired by the Medium Resolution Imaging Spectrometer (MERIS) instrument on Envisat on 3 October 2005, working in Full Resolution mode at 300-metre spatial resolution. The image covers an area of 672 by 672 km.