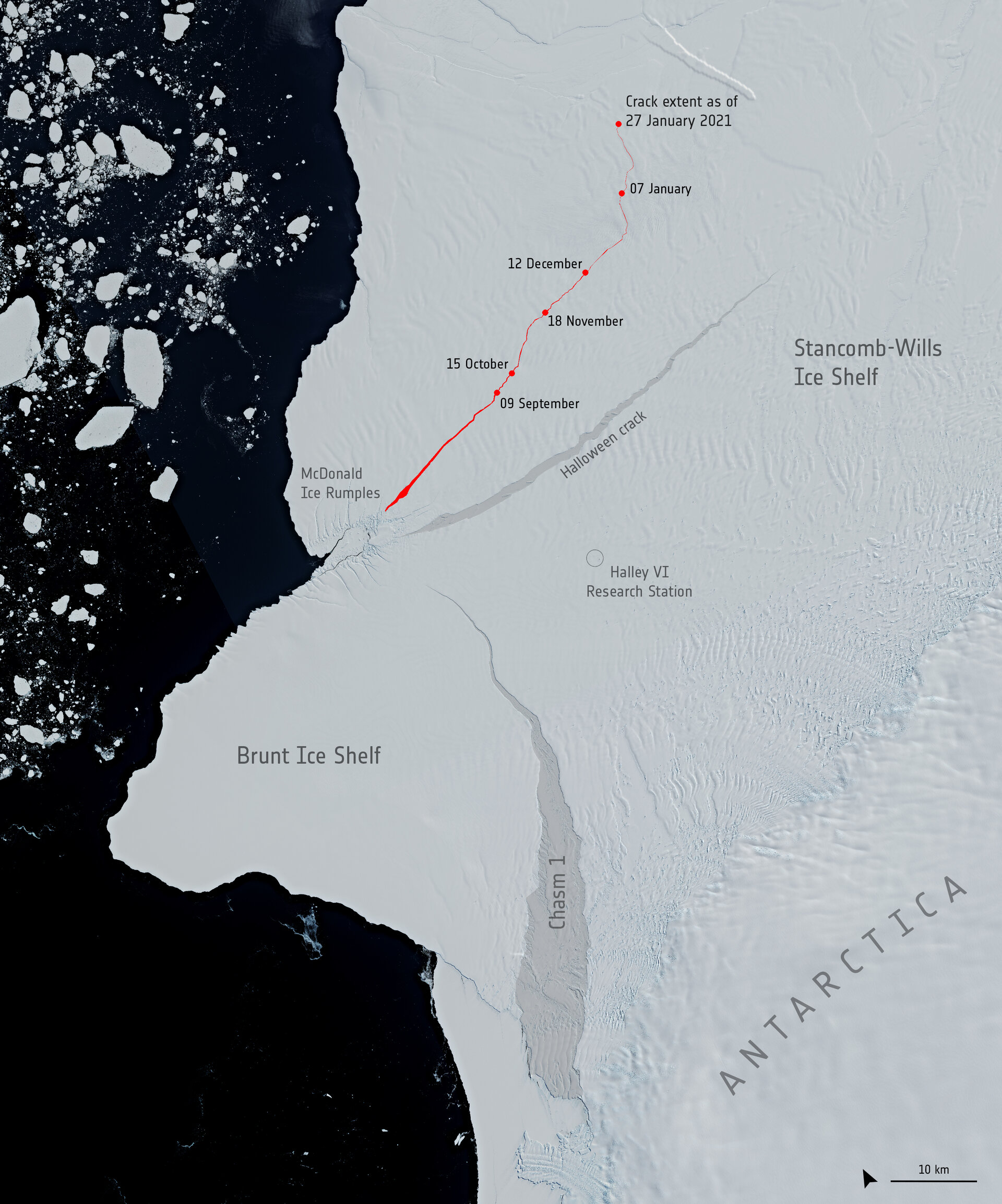 In early 2019, all eyes were fixed on the Brunt Ice Shelf in Antarctica, where a massive iceberg, around the size of Greater London, appeared poised to break off. Almost two years later, the berg is desperately clinging on, although current data indicate calving is imminent. A new crack, spotted in images captured by the Copernicus Sentinel missions, now suggests the potential for calving of multiple bergs.

For years, glaciologists have been tracking a number of cracks in the Brunt Ice Shelf, which borders the Coats Land coast in the Weddell Sea sector of Antarctica. The lengthening of two main cracks in the ice shelf, separated only by a few kilometres, have been closely monitored by satellite imagery. Chasm 1, the large crack running northwards from the southernmost part of Brunt, has been set in place for more than 25 years, while the Halloween crack was first spotted on 31 October 2016.

A more recent, unnamed crack was first noticed in observations from the Copernicus Sentinel-1 mission in late-2019, recently extending by more than 20 km in length. Satellite data has also been used to track the movement and measure the resulting strain in the ice shelf. The map below shows the ice surface velocity on the Brunt and Stancomb-Wills Ice Shelf complex, derived by comparing two Sentinel-1 acquisitions captured on 5 January and 17 January 2021.

The data indicate the region of the floating ice shelf, to the north of the new crack, to be the most unstable, with an approximate movement of almost 5 m per day. The central portion has an average velocity ranging from 2 to 2.5 m per day, while the lower area (visible in blue) suggests a more stable zone of the ice shelf.

“Though appearing poised to calve in 2019, the south westernmost region of the Brunt Ice Shelf tenaciously resisted separation,” noted ESA’s Mark Drinkwater. “Since then, Sentinel-1 data indicate the nose of the ice shelf to be pivoting clockwise around the McDonald Ice Rumples region in which point the shelf ice is grounded on shallow underwater topography.”

“Meanwhile, the strong gradient in ice velocity towards the faster moving Stancomb-Wills ice stream, and ice shelf in the north, has activated a new rift which now threatens the release of a second large iceberg.”

Routine monitoring from satellites offer unprecedented views of events happening in remote regions, and show how ice shelves are responding to changes in ice dynamics, air and ocean temperatures. During the dark winter months in Antarctica, radar images are indispensable because, apart from the region being remote, radar continues to deliver images regardless of the dark weather.

Mark Drinkwater continued, “With today’s Copernicus monitoring system, we are far better equipped not only to observe events in remote places like Antarctica in near real time, but more importantly, to turn this scientific data into theoretical understanding of complex ice fracture processes.”

History shows that the last major event took on the Brunt Ice Shelf took place in 1971, when a portion of ice calved north of the area known as the McDonald Ice Rumples in what appears to be replicated by today’s Halloween Crack.

With the ice shelf deemed unsafe due to the encroaching cracks in 2017, the British Antarctic Survey closed up their Halley VI research station, and re-positioned south of Halloween Crack to a more secure location. Operational since 2012, Halley VI is made up of eight interlinked pods built on skis. This allows the pods to be easily moved in case of unstable ice and cracks on the ice shelf.