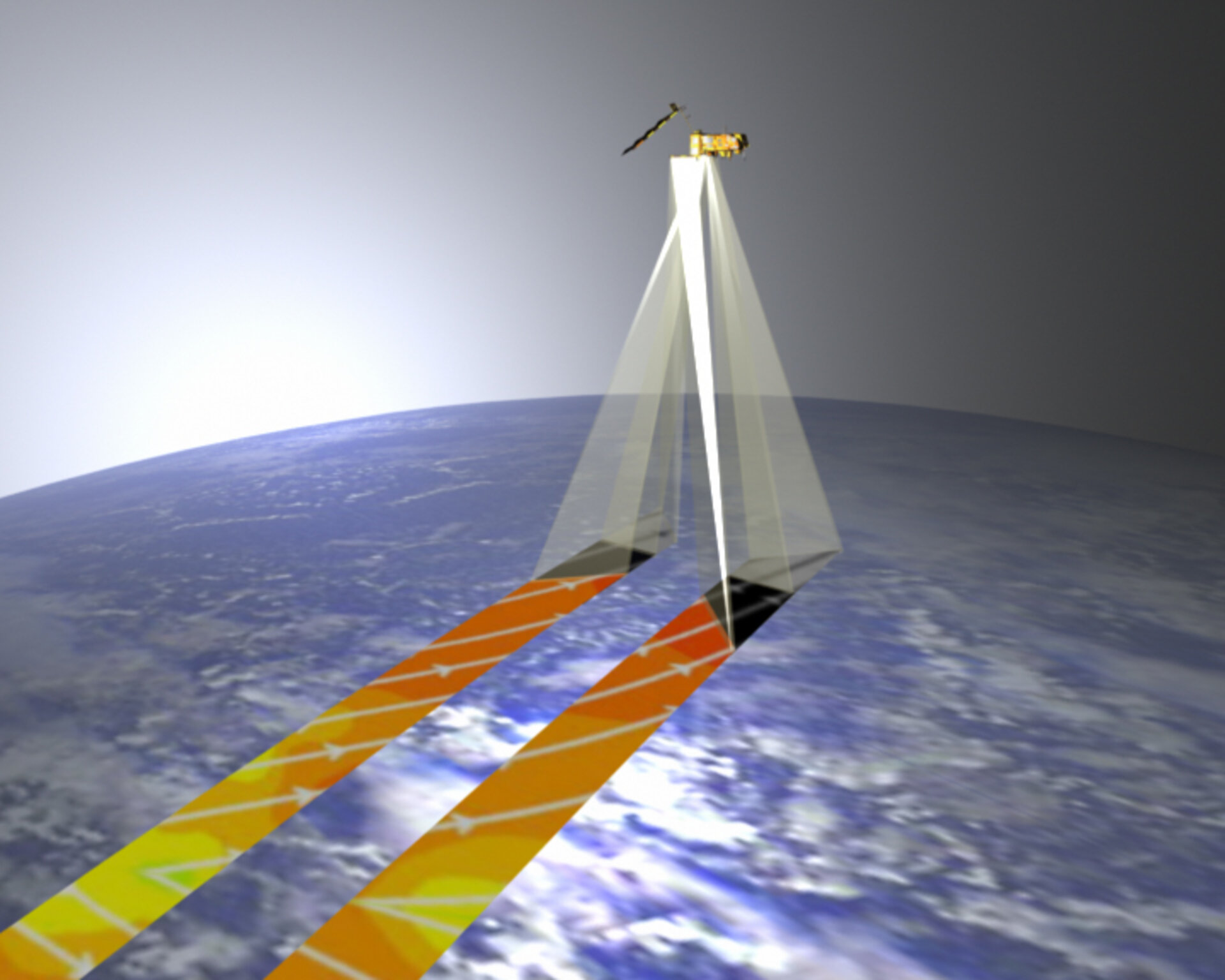 The Advanced Scatterometer (ASCAT) is one of the new-generation European instruments carried on MetOp and will be used to determine information about the wind for use primarily in weather forecasting and climate research. Data from ASCAT will also find applications in a number of other areas such as the monitoring of land- and sea-ice, snow cover and soil moisture.

ASCAT uses radar to measure the electromagnetic backscatter from the wind-roughened ocean surface, from which data on wind speed and direction can be derived. The measuring principle relies on the fact that winds over the sea cause small-scale disturbances of the sea surface, which modify its radar backscattering characteristics in a particular way. These backscattering properties are well known and are dependent on both the wind speed over the sea and the direction of the wind with respect to the point from which the sea surface is observed.

Once MetOp is in its polar orbit 800 kilometres above the surface of the Earth and the solar panels are in position, ASCAT's two three-metre long antenna arms are gently deployed into a fixed V-shaped position at +135° and -135° with respect to the spacecraft flight direction. Each of the antenna arms provides the fore-beam of one swath and the aft-beam of the other. ASCAT transmits well-characterised pulses of microwave energy towards the sea surface and receives and records the resulting echoes for transmission to the ground station. Data on wind speed and direction can then be derived.

The two sets of three antennae allow simultaneous observations to be made from three directions in each of its two 550 km-wide swaths. This will provide better resolution and over twice the coverage of its predecessors (the Active Microwave Instruments on ERS-1 and ERS-2) and achieve near global coverage in a period of just five days.

Each swath is made up of observations taken sequentially from a fore-, a mid- and an aft-antenna. The fore- and aft-antennae are housed on two deployable arms that are stowed during launch on the zenith and anti-velocity faces of the satellite, whilst the two shorter mid-antennae are in a fixed position on the nadir pointing side of the satellite.

Like its predecessors on ERS-1 and ERS-2, ASCAT operates at a frequency in C-band (5.255 GHz) and will provide day- and night-time measurement capability, which is unaffected by cloud cover.

The instrument was developed under ESA/EUMETSAT contract by EADS Astrium GmbH. Its wide range of hardware and software elements was produced by space companies in ten of ESA's member states.