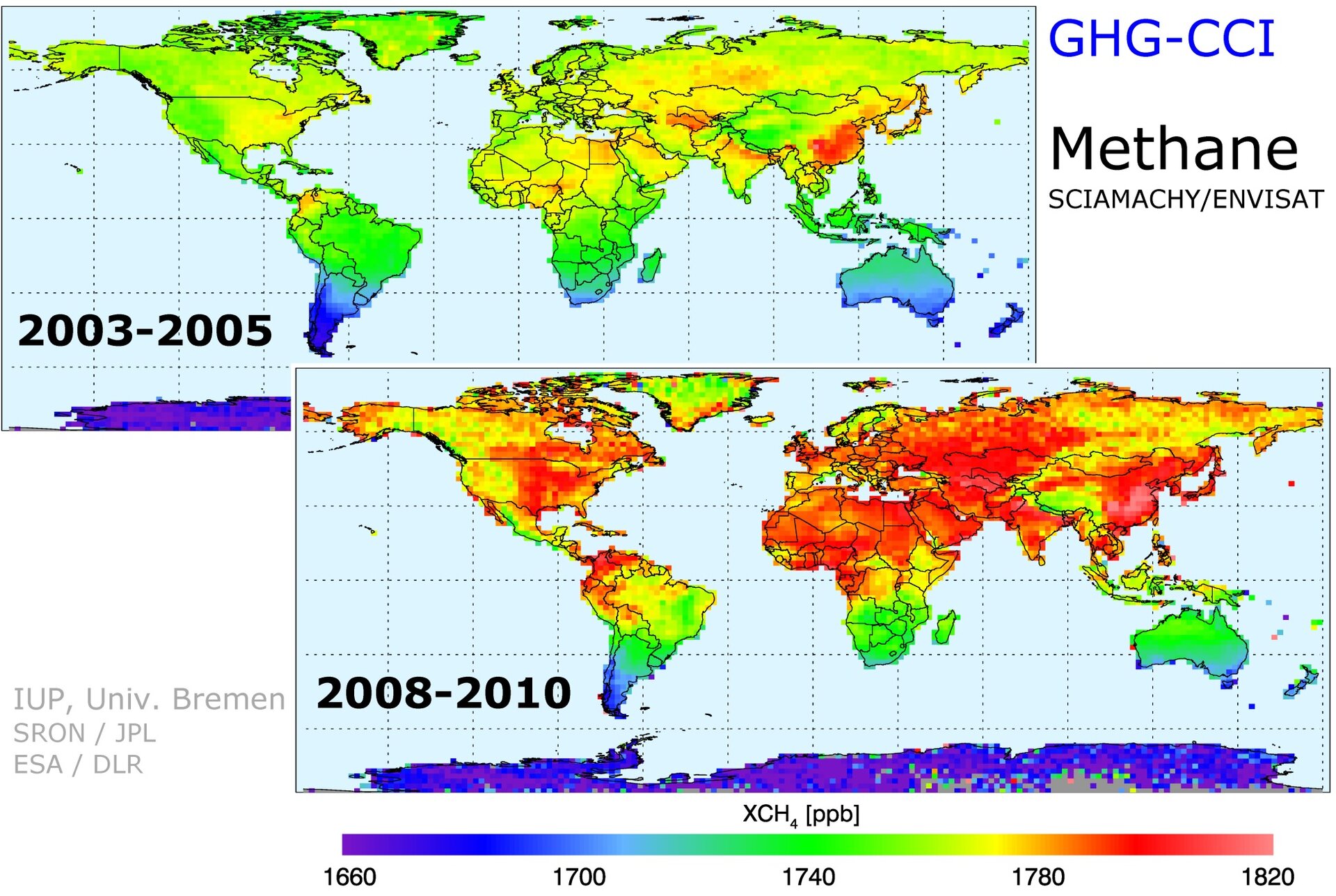 Satellite readings show that atmospheric methane and carbon dioxide are continuing to increase despite global efforts to reduce emissions.

Methane concentrations were somewhat constant until 2007, but since then have increased at about 0.3% per year, whereas global carbon dioxide levels continue to rise at about 0.5% per year.

The results, presented this week at the Living Planet Symposium in Prague, combine data from ESA’s veteran Envisat satellite and Japan’s GoSat mission.

The reason for this recent methane increase is not fully understood, but scientists attribute it to several sources such as agriculture and fossil fuels.

The data also show seasonal fluctuations, such as higher concentrations of methane in India and China during August and September. This is because wetlands and rice paddies are a major source of methane and emissions are largest if it is warm and humid.

Other regions such as the Tropics, the USA and parts of Russia experience similar seasonal changes.

Carbon dioxide shows similar seasonal fluctuations, albeit with a maximum concentration earlier in the season at northern latitudes. This is due to the regular uptake and release of carbon dioxide by the growing and decay of terrestrial vegetation: photosynthesis, respiration and decay of organic matter.

Overall, carbon dioxide has shown a steady increase over the past decade despite global efforts to reduce emissions.

“Currently, plants take up about 25% of the carbon dioxide we are emitting and, without this, atmospheric carbon dioxide levels and related consequences would be much larger,” said Michael Buchwitz from the Institute of Environmental Physics of the University of Bremen in Germany.

“However, we do not know how plants will respond to a changing climate. Our understanding of the ‘land carbon sink’ is limited. A goal of the satellite carbon dioxide observations is to close related knowledge gaps, which will lead to improved climate prediction.”

The upcoming Sentinel-5P mission for Europe’s Copernicus programme is set to continue data collection on methane and other components of atmospheric chemistry by scanning the whole globe every day.

“For the future, Sentinel-5P will be very important, in particular because of its very dense, high-resolution observations of atmospheric methane, which have the potential to detect and quantify the emissions of important methane emission hot spots such as oil and gas fields,” noted Michael Buchwitz, who also leads the Greenhouse Gases project under ESA’s Climate Change Initiative.

The atmospheric data products cover 2003–14 and are available at http://www.esa-ghg-cci.org/