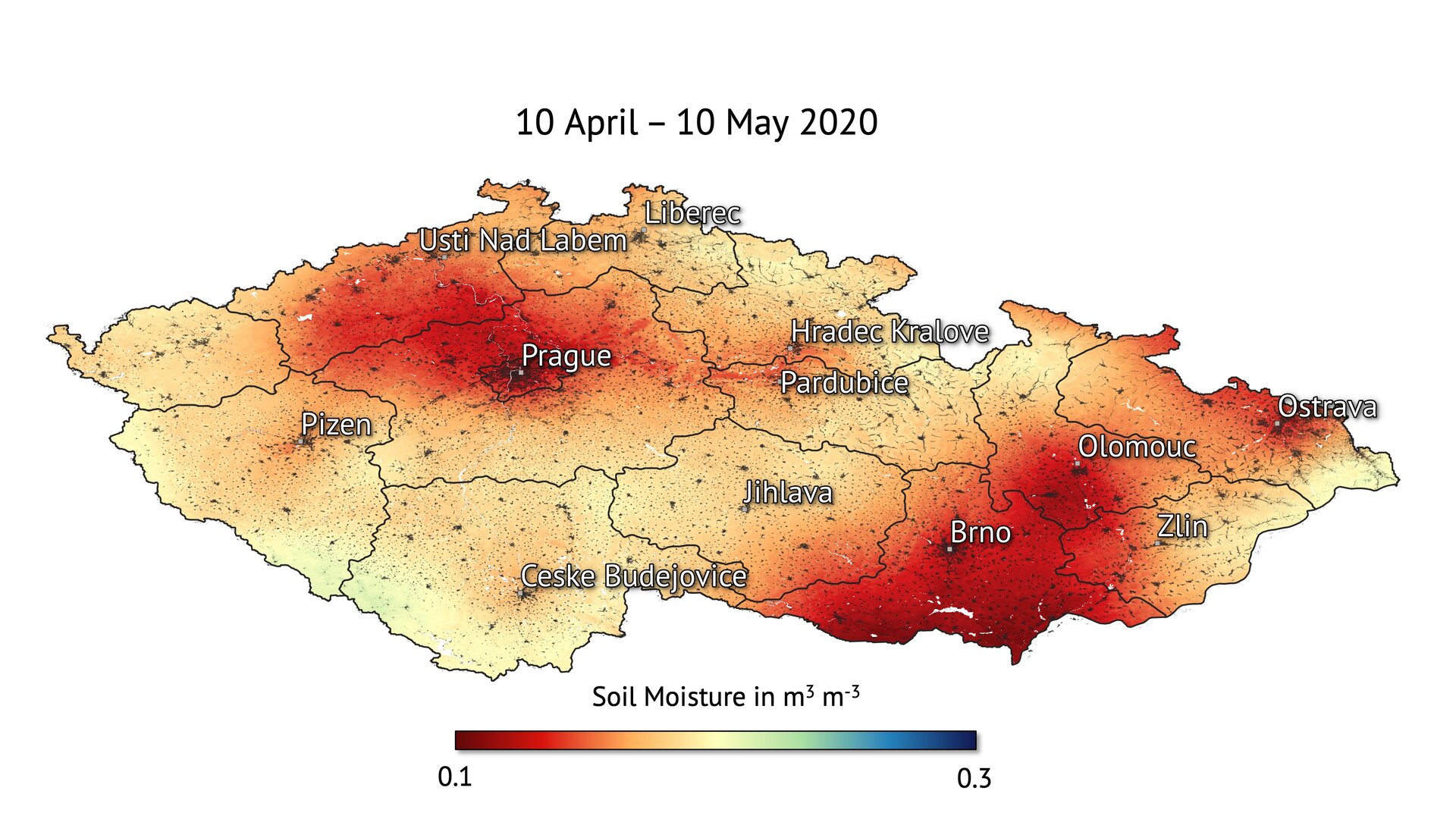 The prolonged period of dry weather in the Czech Republic has resulted in what experts are calling the ‘worst drought in 500 years.’ Scientists are using ESA satellite data to monitor the drought that’s gripped the country.

Recent maps, produced by the Dutch company VanderSat, show the extent of the recent drought in the Czech Republic. The maps show drier-than-usual soil moisture conditions from 10 April to 10 May 2020, compared to the average observations over the same period over the past six years (2015-2020).

Some areas display a 30% difference compared to the average, with the Olomouc and Ústí regions appearing to be the most affected.

This sequence of images show the extent of the recent drought.

Richard de Jeu, from VanderSat, comments, “When compared to the average, or what we consider ‘normal’ conditions, a 30% difference in spring can be considered catastrophic for agriculture and nature if this drought persists throughout the summer.”

Droughts are major natural hazards and have wide-reaching economic, social and environmental impacts. Globally, severe droughts are considered the number one threat to farmers – regularly endangering crop yield and business for farmers.

Climate change is exacerbating drought in many parts of the world – increasing its frequency, severity and duration. With 2020 expected to be one of the hottest years on record, drought monitoring is crucial.

VanderSat uses data from ESA’s SMOS satellite and the EU’s Copernicus Sentinel missions, combined with data from NASA and the Japanese space agency JAXA missions, to measure soil moisture across the globe. These data can help farmers to insure and protect themselves against the impact of agricultural drought for specific regions of interest.

Richard continues, “Satellite soil moisture data serves as a crucial layer for agricultural drought insurance across the globe and is heavily used to support agricultural practices. It is thanks to data from ESA’s SMOS satellite and the Copernicus Sentinels missions that make our soil moisture service possible.”

Klaus Scipal, ESA’s SMOS Mission Manager, says, “It is impressive to see that even after 10 years of operations, SMOS is still in a very healthy condition and it keeps on delivering high-quality data to support sectors like the agribusiness and many others. SMOS delivers 96% of its data in less than three hours of sensing, which allows companies like Vandersat to make their observations instantly available to the agribusiness sector.”

Launched in 2009, SMOS is one of ESA’s Earth Explorer missions – which form the science and research element of the Living Planet Programme. The SMOS satellite carries a novel interferometric radiometer that captures ‘brightness temperature’ images. These images are used to derive global maps of soil moisture every three days, achieving an accuracy of 4% at a spatial resolution of about 50 km – comparable to detecting one teaspoon of water mixed into a handful of soil.