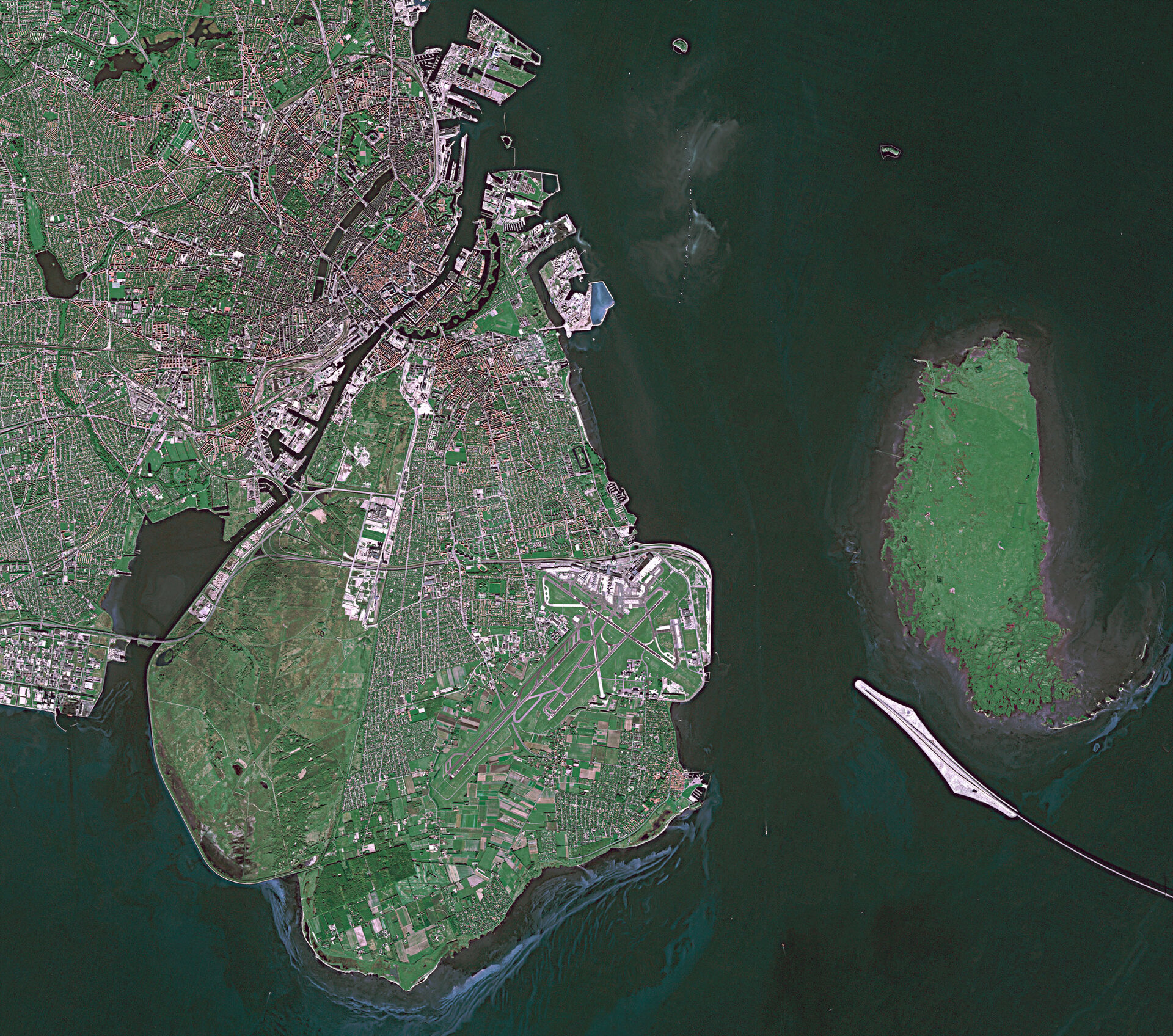 Copenhagen, the capital of Denmark, is highlighted in this image. The largest city in Denmark, Copenhagen is located on the eastern side of the island of Zealand (left) and on the island of Amager (right).

Beginning next week Copenhagen will host the historic two-week 15th UN Climate Change Conference (COP15), where government representatives from around the world are expected to decide on the future extent of reductions in greenhouse gas emissions by working out a new international agreement before the Kyoto protocol expires in 2012.

ESA will attend the conference to demonstrate how satellites have provided an ever-clearer picture of the health of our planet and the signs of climate change and to share results from satellite-based services developed to support the Protocol.

First founded as a fishing village around a thousand years ago, Copenhagen has subsequently grown in economic significance as a consequence of its natural harbour facing the Øresund Strait (The Sound), which divides Denmark from Sweden and links the Baltic to the North Sea.

Peberholm was created as part of the Øresund Bridge, a combined two-track rail and four-lane road bridge-tunnel across the Øresund Strait that connects Copenhagen with the Swedish city of Malmö (not visible). Peberholm serves as a crossover point between the bridge, completed in 2000, and the 4050-m long Drogden Tunnel.

The Copenhagen-Malmö Port stretches 10 km between Zealand and Amager and 7 km along the Sound. Adjacent to the modern port facilities a star-shaped fortification, known as Kastellet, can be seen. A relic of Copenhagen’s past, this fortress is more than 340 years old. Trace the coast of Zealand westward to find an area of land enclosed by an inverted-U. This is the small island of Slotsholmen, which is the location of Christiansborg Palace, home to Denmark’s Folketing or Parliament and also the Danish Royal Library.

Since 2000, this historic city has also been home to one of the largest offshore wind farms ever built, the Middelgrunden Offshore Wind Farm (visible). It is situated on a natural reef about 3.5 km east of Copenhagen harbour.

Anchored in concrete foundations, the wind farm’s 20 turbines are positioned in an arc measuring 3.4 km in length. The farm produces 89 000 megawatts of electricity annually, enough to supply upwards of 3% of Copenhagen’s needs. Denmark has been supporting wind power through tax incentives and subsidies since the 1970s. By 2040 Denmark plans to meet 40% of its electricity needs using wind energy, up from a figure of 13% in 2001.

Copenhagen Airport is visible as an L-shaped, white structure on the eastern side of Amager.

SPOT-4 acquired this image in 2004. SPOT-4 is supported by ESA as a 'Third Party Mission', which means ESA utilises its multi-mission European ground infrastructure and expertise to acquire, process and distribute data from the satellite to its wide user community.