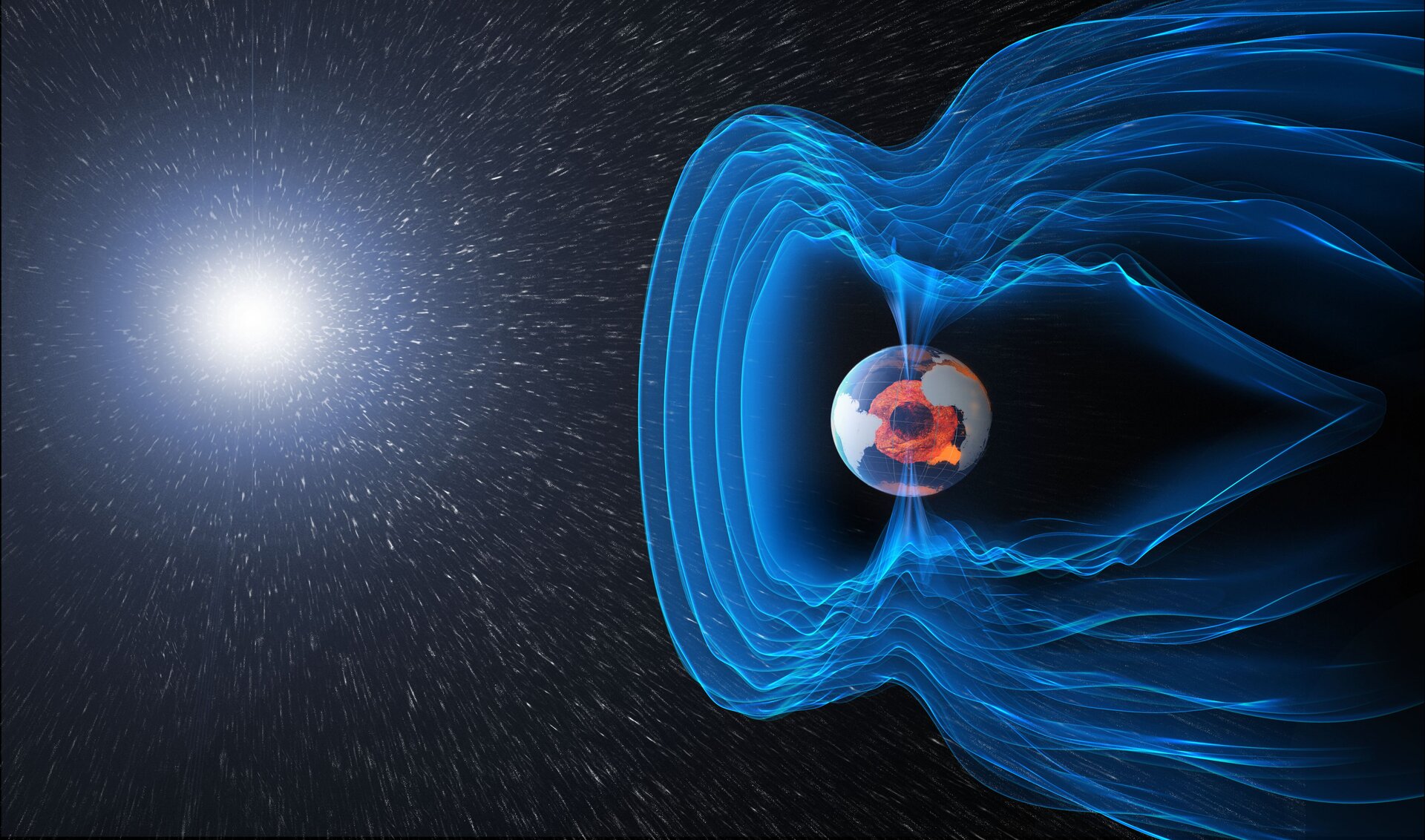 The Sun bathes our planet in the light and heat it needs to sustain life, but it also bombards us with dangerous charged particles in solar wind. Our magnetic field largely shields from this onslaught, but like many a relationship, it’s somewhat complicated. Thanks to ESA’s Swarm mission the nature of this Earth–Sun coupling has been revealed in more detail than ever before.

Earth’s magnetic field is like a huge bubble, protecting us from cosmic radiation and charged particles carried by powerful winds that escape the Sun’s gravitational pull and sweep across the Solar System.

The trio of Swarm satellites were launched in 2013 to improve our understanding of how the field is generated and how it protects us from this barrage of charged particles.

Since our magnetic field is generated mainly by an ocean of liquid iron that makes up the planet’s outer core, it resembles a bar magnet with field lines emerging from near the poles.

The field is highly conductive and carries charged particles that flow along these field lines, giving rise to field-aligned currents.

Carrying up to 1 TW of electrical power – about six times the amount of energy produced every year by wind turbines in Europe – these currents are the dominant form of energy transfer between the magnetosphere and ionosphere.

The shimmering green and purple light displays of the auroras in the skies above the polar regions are a visible manifestation of energy and particles travelling along magnetic field lines.

The theory about the exchange and momentum between solar wind and our magnetic field actually goes back more than 100 years, and more recently the Active Magnetosphere and Planetary Electrodynamics Response Experiment satellite network has allowed scientists to study large-scale field-aligned currents.

However, the Swarm mission is leading to exciting new wave of discoveries. A new paper explores the dynamics of this energetic coupling across different spatial scales – and finds that it’s all in the detail.

Ryan McGranaghan from NASA’s Jet Propulsion Laboratory said, “We have a good understanding of how these currents exchange energy between the ionosphere and the magnetosphere at large scales so we assumed that smaller-scale currents behaved in the same way, but carried proportionally less energy.”

“Swarm has allowed us to effectively zoom in on these smaller currents and we see that, under certain conditions, this is not the case.

“Our findings show that these smaller currents carry significant energy and that their relationship with the larger currents is very complex. Moreover, large and small currents affect the magnetosphere–ionosphere differently.”

Colin Forsyth from University College London noted, “Since electric currents around Earth can interfere with navigation and telecommunication systems, this is an important discovery.

“It also gives us a greater understanding of how the Sun and Earth are linked and how this coupling can ultimately add energy to our atmosphere.

“This new knowledge can be used to improve models so that we can better understand, and therefore, ultimately, prepare for the potential consequences of solar storms.”

ESA’s Swarm mission manager, Rune Floberghagen, added, “Since the beginning of the mission we have carried out projects to address the energy exchange between the magnetosphere, ionosphere and the thermosphere.

"But what we are witnessing now is nothing short of a complete overhaul of the understanding of how Earth responds to and interacts with output from the Sun.

“In fact, this scientific investigation is becoming a fundamental pillar for the extended Swarm mission, precisely because it is breaking new ground and at the same time has strong societal relevance. We now wish to explore this potential of Swarm to the fullest.”