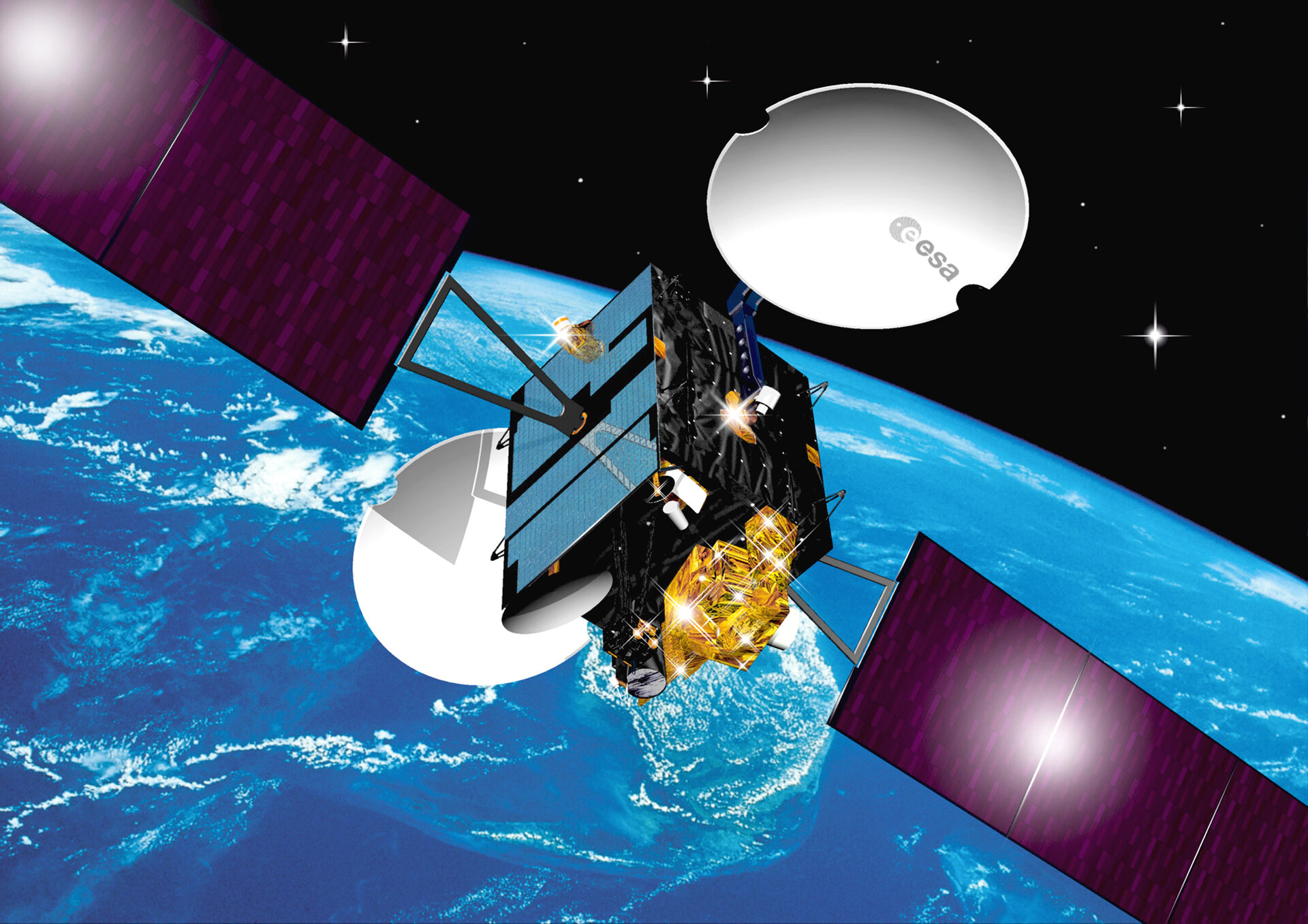 ESA PR 50-2002. A mission brought back from the edge, a world premiere in space, European engineers meeting the challenge of a launch malfunction: such are the results of Artemis's first, adventurous year in space.

For Artemis is still alive, doggedly advancing towards its working position in geostationary orbit, with ion engines not originally designed for such a task. Already it has demonstrated a new way of relaying data between satellites, premiering laser links in space. One year ago, Artemis was widely thought to be as good as lost; now, the spacecraft promises to perform its mission for advanced telecommunications.

Exactly one year ago, due to a malfunction in its upper stage, Ariane 5 left ESA's telecommunications satellite Artemis in a lower than intended elliptical orbit. The apogee (maximum distance from Earth) was only 17 487 km, far short of the targeted geostationary transfer orbit with an apogee at 35 853 km. A team of ESA and industry specialists responded vigorously with a series of innovative control procedures to rescue the spacecraft. Daring manoeuvres were executed and these proved not only very successful but also highly efficient. Using almost all of the available chemical propellant, Artemis managed to escape the orbit in which it had to contend with the deadly Van Allen belts and to reach safely a circular orbit at an altitude of 31000 km only a few days after launch.

A long haul to geostationary orbit

Since then, the rescue efforts have continued unabated using the four ion engines mounted on the satellite redundantly in pairs. These novel engines, instead of conventional chemical combustion engines, use ionised xenon gas. They were originally designed only to control the satellite's inclination by generating thrust perpendicular to the orbital plane. The rescue operation however required thrust to be generated in the orbital plane to push the satellite to final geostationary orbit. This could be realised by rotating the satellite in the orbit plane by 90 degrees with respect to its nominal orientation.

Taking optimum advantage of the spacecraft flight configuration, new strategies were developed not just to raise altitude but also to counter the natural increase of in orbital inclination. To implement those new strategies, new on-board control modes, a new station network and new flight control procedures had to be put in place.

The new concept for steering the ion propulsion engines includes entirely new control modes never before used on a telecommunication spacecraft, as well as new telecommand and telemetry and other data handling interface functions. In all, about 20% of the original spacecraft control software had to be modified. Thanks to the re-programmable on-board control concept, these modifications could be loaded by uplinking to the satellite software "patches" amounting in total to 15 000 words, the largest reprogramming of flight software ever implemented on a telecommunications satellite.

By the end of December 2001 work on the new software had been completed and it was subsequently validated using the spacecraft simulator as test bed. With the characterisation of the four engines all preparatory activities were completed and on 19 February this year the orbit-raising manoeuvre was started using only the ion propulsion system.

Since the start of orbit-raising operations spacecraft controllers have had to respond to many kinds of unforeseen situations, since the new strategy could only be tested realistically on the spacecraft itself. Unlike traditional pre-flight acceptance testing, no test-bed is available to exactly replicate the current scenario.

Thanks to the extreme flexibility and redundancy inherent in the system design, steady progress in the orbit-raising process has been maintained, albeit at a lower rate than would theoretically be possible. By its first birthday, Artemis - through dogged operation of its ion engines with their very modest thrust of only 15 milli-Newton - has climbed in altitude by more than 1500 km. On average, 15 km raise has been achieved per day.

For several reasons, two of the four ion engines (those on the south panel) cannot be used at present. So orbit-raising is now continuing using a single engine on the north panel. Using additional spacecraft roll bias, an altitude increase of 15 km per day is still being achieved. With some 3000 km to go, about 200 days will thus be needed to reach geostationary altitude, allowing the Artemis communications payloads to go operational in early 2003.

Several months passed between arrival in the parking orbit and commencement of orbit-raising manoeuvres. That time was used to carry out commissioning and payload performance verification.

In November/December 2001 payload tests were performed. These tests could only be done every fifth day, when the Artemis feeder link antenna beam "illuminated" ESA's test station in Redu (Belgium). Further constraints arose from the fact that some payload frequencies can be used only when Artemis is at, or close to, its nominal orbit position.

Nevertheless, enough opportunities were found to demonstrate that all payloads (S-band and Ka-band and optical data relay, Navigation and L-band mobile payload) are available and that their performances are in line with pre-launch results. In other words, they are fully compliant with specifications.

Correct operation of the closed loop tracking system for the Ka-band inter-orbit antenna was also demonstrated. The antenna acquired a signal transmitted from Redu and maintained the link automatically while Artemis drifted slowly across the sky.

The most spectacular event was the demonstration of SILEX operations. Following initial successful commissioning using ESA's optical ground station on Tenerife, the optical link was established between Artemis and SPOT 4. On 30 November 2001, for the first time ever, image data collected by a low-flying spacecraft were transmitted by laser to a (quasi-)geostationary satellite and from there to the data processing centre in Toulouse.

In total, 26 attempts were made to establish the optical link and all 26 were successful. The link was never lost before the pre-programmed point in time. Link quality was almost perfect: a bit error rate better than 10 (exp -9) was measured. This means that 1 bit at most is received erroneously per 1 000 000 000 bits transmitted.

Transfer to the geostationary position is taking longer than expected - for the various reasons explained above. Artemis is now expected to arrive at its nominal position at the beginning of 2003. Once on station, its payloads will be used as follows:

Artemis has so far shown itself to be a very robust satellite. It was necessary and proved possible to operate many of the subsystems outside the specified ranges and even in modes that had not been thought of before launch. This would have not been possible without enormous commitment from the industrial teams taking part in the rescue operation: Alenia Spazio as prime contractor, the Altel (Alenia Spazio-Telespazio) consortium as spacecraft operator and Astrium, which is responsible for operation of the ion thrusters system and for spacecraft attitude and orbit control.