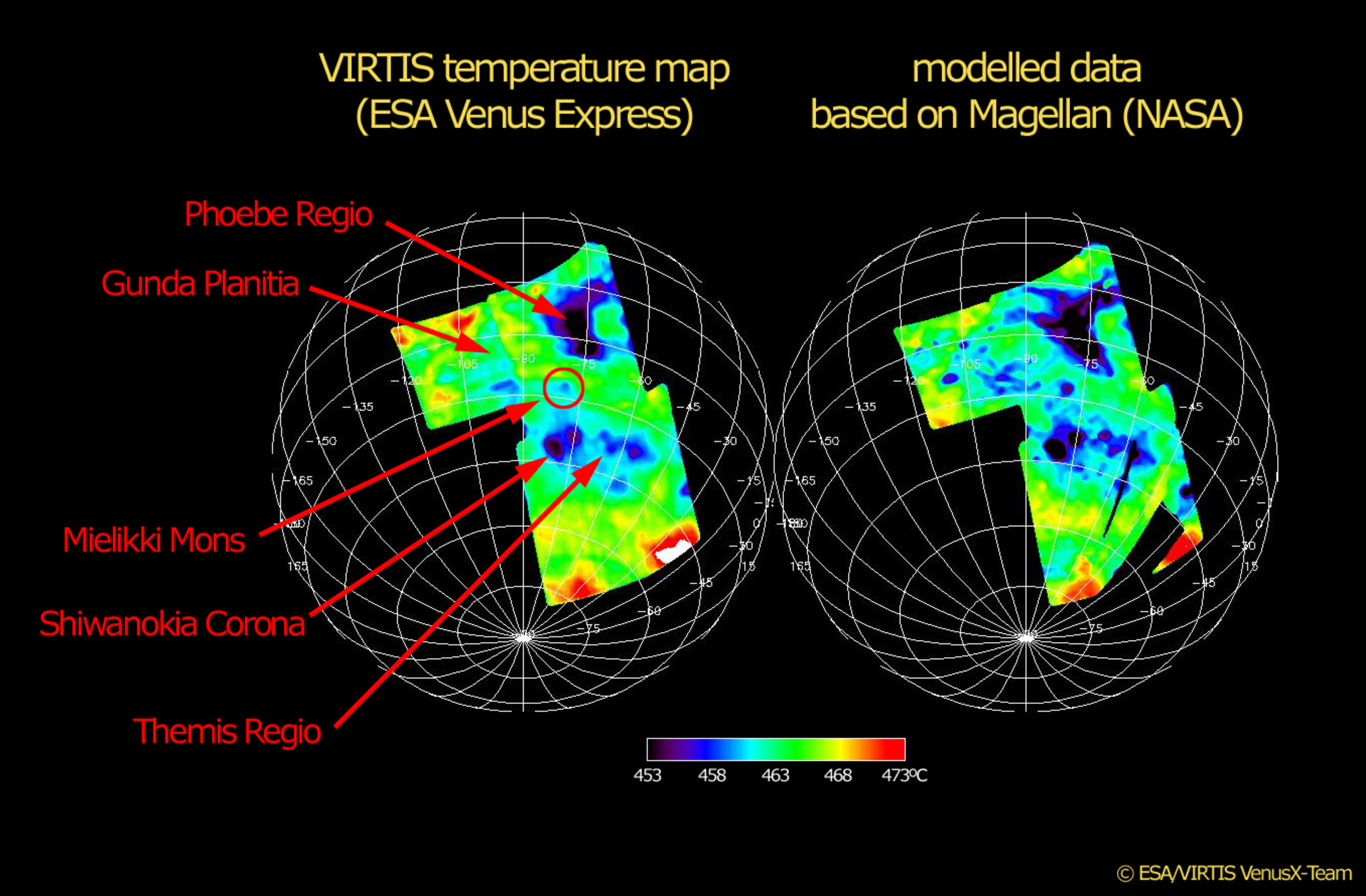 The temperature maps of the Venusian surface shown in this image were built thanks to direct measurements obtained by Venus Express’ VIRTIS instruments (left), compared with surface temperature predictions based on the Magellan topographic data obtained in the early 1990s (right).

VIRTIS, the Visible and Infrared Thermal Imaging Spectrometer on board ESA’s Venus Express, gathered the data combined into this mosaic on 10 August 2006, during a single orbit (orbit 112). The spacecraft was flying over the Themis and Phoebe Regiones in the southern hemisphere of Venus. Themis Regio is a highland plateau located on the 270º East meridian and at about 37º South latitude. In the future, combining data from many orbits will significantly improve the quality and the spatial resolution of the surface images.

This is a region that has experienced strong volcanic activity in the past, and possibly still does today. A series of interconnecting large coronae is running through the highland. Coronae are circular to elongate features, which are surrounded by multiple concentric ridges. These features are thought to be forming by hot spots in the Venusian crust. The coronae in Themis Regio are building a chain of volcanoes and faults called Parga Chasma, which runs from northwest to southeast, and eventually connect Parga with Atla Regio (not covered in the inage). The Phoebe Regio is a highland region of Venus (such regions are called 'tesserae'), where most of the Soviet Venera probes landed.

Large highland regions are clearly visible, as well as single volcanic structures such the Mielikki Mons, in the centre of the mosaic. On the south-eastern part of the mosaic VIRTIS covered a region for which Magellan maps are not available.

The surface-temperature measurements were performed using the atmospheric windows located in the near infrared at 1.02, 1.10, and 1.18 microns, respectively. The radiation coming from the surface is affected by the thick cloud layer, so a ‘de-clouding’ algorithm had to be applied.

The non-labelled version of this image is available by clicking here .