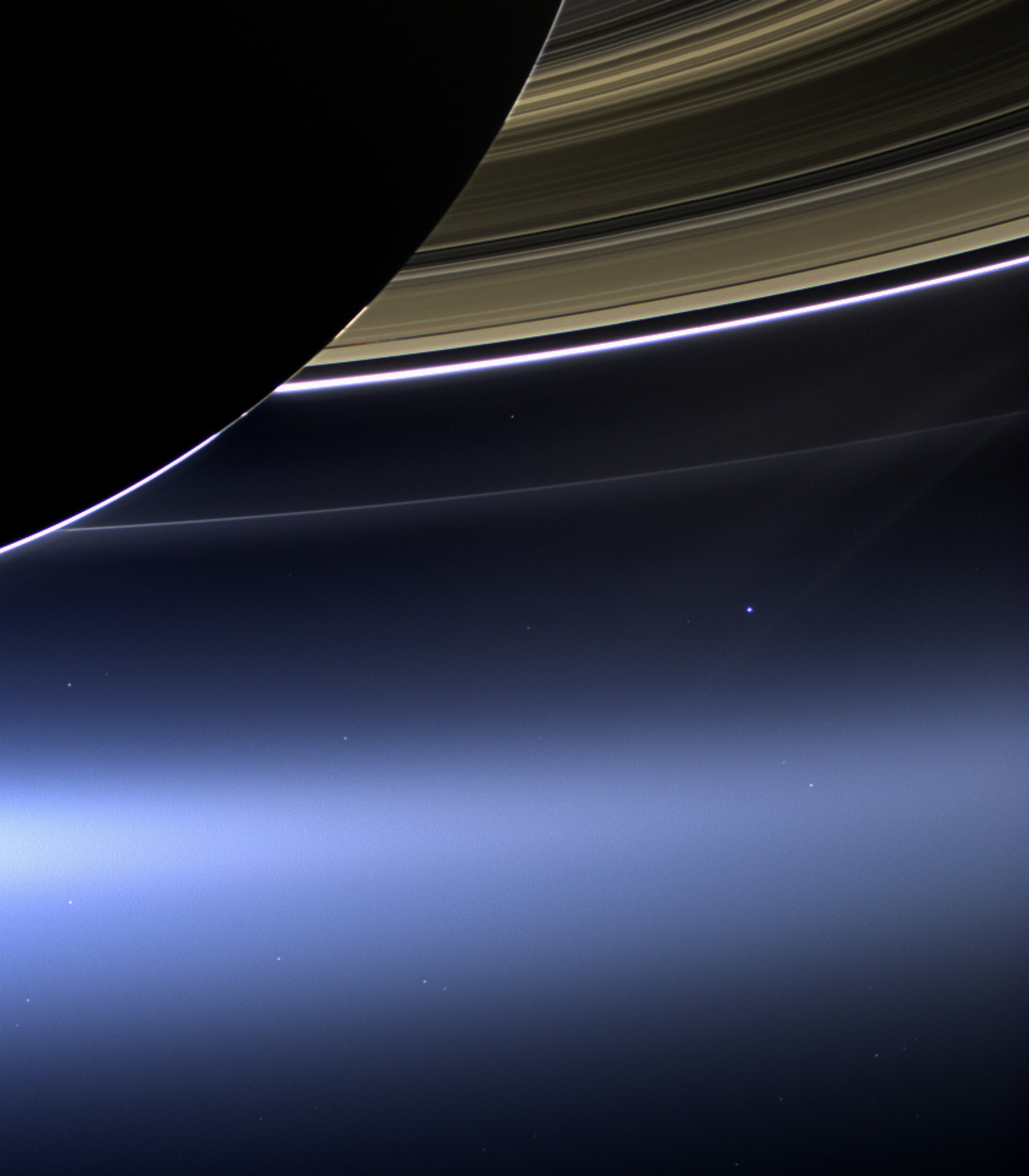 In this rare image taken on 19 July, the wide-angle camera on the international Cassini spacecraft has captured Saturn’s rings and our planet Earth and Moon in the same frame.

The dark side of Saturn, its bright limb, the main rings, the F ring, and the G and E rings are clearly seen; the limb of Saturn and the F ring are overexposed. The ‘breaks’ in the brightness of Saturn’s limb are due to the shadows of the rings on the globe of Saturn, preventing sunlight from shining through the atmosphere in those regions. The E and G rings have been brightened for better visibility.

Earth, 1.44 billion km away in this image, appears as a blue dot at centre right; the Moon can be seen as a fainter protrusion off its right side. The other bright dots nearby are stars.

This is only the third time ever that Earth has been imaged from the outer Solar System. The first image was taken by NASA’s Voyager-1 in 1990 and famously titled “Pale Blue Dot”. In 2006, Cassini imaged Earth in the stunning and unique mosaic of Saturn called “In Saturn's Shadow – The Pale Blue Dot”.

The new images marked the first time that inhabitants of Earth knew in advance that their planet was being imaged. That opportunity allowed people around the world to join together in social events to celebrate the occasion.

This view looks towards the unilluminated side of the rings from about 20º below the ring plane.

Images taken using red, green and blue filters were combined to create this natural colour view. The images were obtained with Cassini’s wide-angle camera on 19 July at a distance of 1.212 million km from Saturn, and 1445.858 million km from Earth. The illuminated areas of both Earth and the Moon are unresolved here. Consequently, the size of each ‘dot’ is the same size that a point of light of comparable brightness would have in the wide-angle camera.

The Cassini–Huygens mission is a cooperative project of NASA, ESA and Italy’s ASI space agency. The Jet Propulsion Laboratory, a division of the California Institute of Technology in Pasadena, manages the mission for NASA’s Science Mission Directorate, Washington, DC. The Cassini orbiter and its two cameras were designed, developed and assembled at JPL. The imaging operations centre is based at the Space Science Institute in Boulder, Colorado.