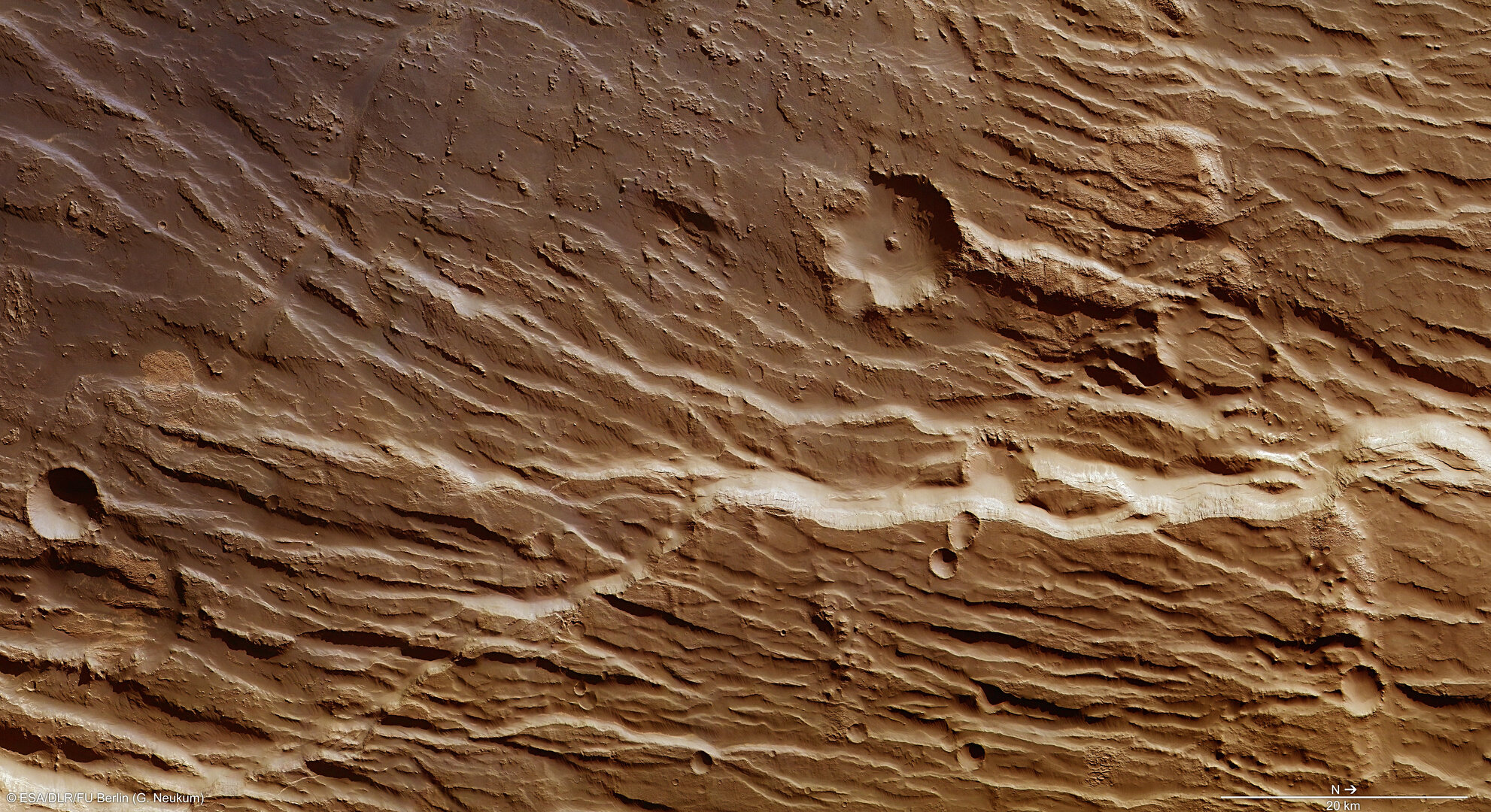 Chasms and cliffs on Mars

Although Mars is a very alien planet, some aspects of its geology are surprisingly familiar. This Mars Express image shows a snippet of a region of Mars filled with cliffs, trenches, faults, giant plateaus and volcanoes.

The flowing cracks and fault-like lines in this image form part of the Claritas Rupes escarpment, a 950 km-long network of steep cliffs and sloping outcrops. This escarpment lies within a larger geological system named Claritas Fossae, a weaving network of ‘grabens’ (a German term meaning ditch or trench) that stretches for some 2000 km.

The many chasms, fractures and cracks in this area are thought to have been caused by stress in the planet’s crust as it stretched and pulled apart, triggered by the formation of a nearby raised mound known as the Tharsis Bulge.

This bulge, located within the volcanic Tharsis region, extends to a height of about 10 km at its peak. Its violent formation caused parts of the crust to crack and shift, sliding into depressions and gaps, forming a distinctive pattern of geological features such as sunken grabens and raised blocks known as ‘horsts’. These two features can be very roughly imagined as an ‘M’ shape – grabens form the bottom of the central dip, while horsts form the two uppermost tips.

Similar patterns can be found on Earth around the Upper Rhine Valley between Basel in Switzerland, and Karlsruhe in Germany, or the Eger Graben in the Czech Republic, near the Ore Mountains.

Prominent examples of terrestrial grabens include California’s Death Valley, and the Dead Sea depression in the Jordan Rift Valley. Examples of horsts include France’s Vosges Mountains, and the Palestine Plateau.

Claritas Rupes forms the eastern boundary of the Tharsis region. This region contains some of the largest volcanoes in the Solar System, including the famous Olympus Mons, which stands some three times the height of Earth’s Mount Everest.

This image was acquired by the High Resolution Stereo Camera of Mars Express on 30 November 2013 at a resolution of about 14 m per pixel. It was first published on 13 February 2014 on the DLR German Aerospace Center and Freie Universität Berlin websites.

Copyright Notice:
This work is licenced under the Creative Commons Attribution-ShareAlike 3.0 IGO (CC BY-SA 3.0 IGO) licence. The user is allowed to reproduce, distribute, adapt, translate and publicly perform this publication, without explicit permission, provided that the content is accompanied by an acknowledgement that the source is credited as 'ESA/DLR/FU Berlin’, a direct link to the licence text is provided and that it is clearly indicated if changes were made to the original content. Adaptation/translation/derivatives must be distributed under the same licence terms as this publication. To view a copy of this license, please visit http://creativecommons.org/licenses/by-sa/3.0/igo/.