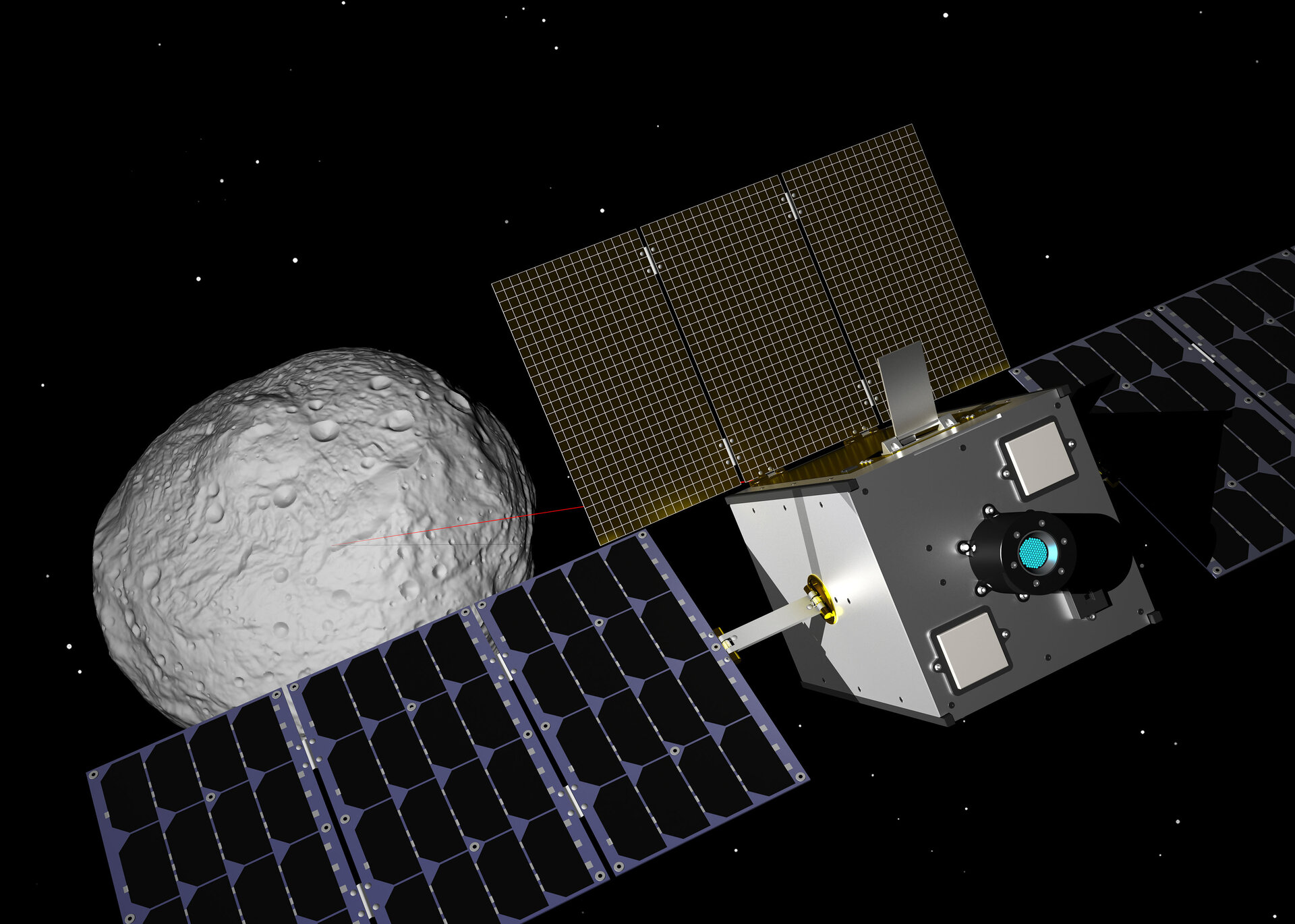 ESA has designed its first stand-alone CubeSat mission for deep space – aimed at targeting a little- known class of asteroid: small in size and rapidly spinning.

Studied in the Concurrent Design Facility, ESA’s highly networked facility for designing novel missions, the ‘Miniaturised – Asteroid Remote Geophysical Observer’, or M–Argo, is a nano-spacecraft based on the CubeSat design employing standardised 10 cm cubic units within which electronic boards can be stacked and subsystems attached.

M–ARGO would be a 12-unit CubeSat – with bodily dimensions of 22 x 22 x 34 cm – that would hitch a ride on the launch of a larger space mission whose trajectory takes it close to beyond Earth orbit – such as large astronomy missions to a Sun–Earth Lagrange point.

The CubeSat would then use its own high-efficiency electric propulsion system to take it into deep space and rendezvous with an asteroid target.

“Having shown their worth in low-Earth orbit we have been studying their use further afield, starting with CubeSats for ESA’s proposed Asteroid Impact Mission and then the Moon.

“But these CubeSat studies assumed the availability of a nearby ‘mothership’ to be relied on for transportation and then communication home. M–Argo by contrast would be completely stand-alone in nature.

“Our CDF study shows the concept is promising and would have a high potential of cutting the entry-level cost of deep-space exploration by about a factor of ten.”

The study confirmed a total of four separate asteroids the CubeSat could reach under its own power – and potentially up to 30 in total – as Roger explains: “They are all less than 50 m in diameter – half the length of a football field – and all rapidly spinning, modelled accordingly to have no remaining surface dust but instead to be monolithic in nature.

“So this would be a quite new type of planetary body to visit, thereby offering the potential for new scientific discoveries.”

M–ARGO would spend around six months surveying its target, using two miniaturised instruments: a multispectral imager and a laser altimeter.

Data would be returned using a specially designed transponder and high-gain antenna array, communicating with existing 15-35 m ESA-operated ‘Estrack’ ground stations, with the potential to be backed up by Italy’s larger 64-m diameter Sardinia Radio Telescope for a greater data return.

M–Argo could be ready launch in mid-2021 at the earliest, assuming that some key technology development starts soon. Most of its key technologies are already available, and the study pinpointed other R&D needed to make it possible – including a CubeSat-sized solar array drive mechanism, electric propulsion and X-band communications, plus radiation hardness of components – to be performed within ESA technology programmes.

The study also considered an alternative mission concept for M–ARGO, as a space weather observatory placed at the Sun–Earth L5 Lagrange Point, hosting a radiation monitor and boom-based magnetometer instrument.

The next step will be to start the key technology developments and find a suitable flight opportunity. Then afterwards the main mission and system definition phase could commence.

While the M-Argo concept is studied, ESA will be marking 30 June,  Asteroid Day, and spreading the word on the tiny bodies that Earth shares space with, as both a scientific resource and a potential danger. For more information on Asteroid Day click here.