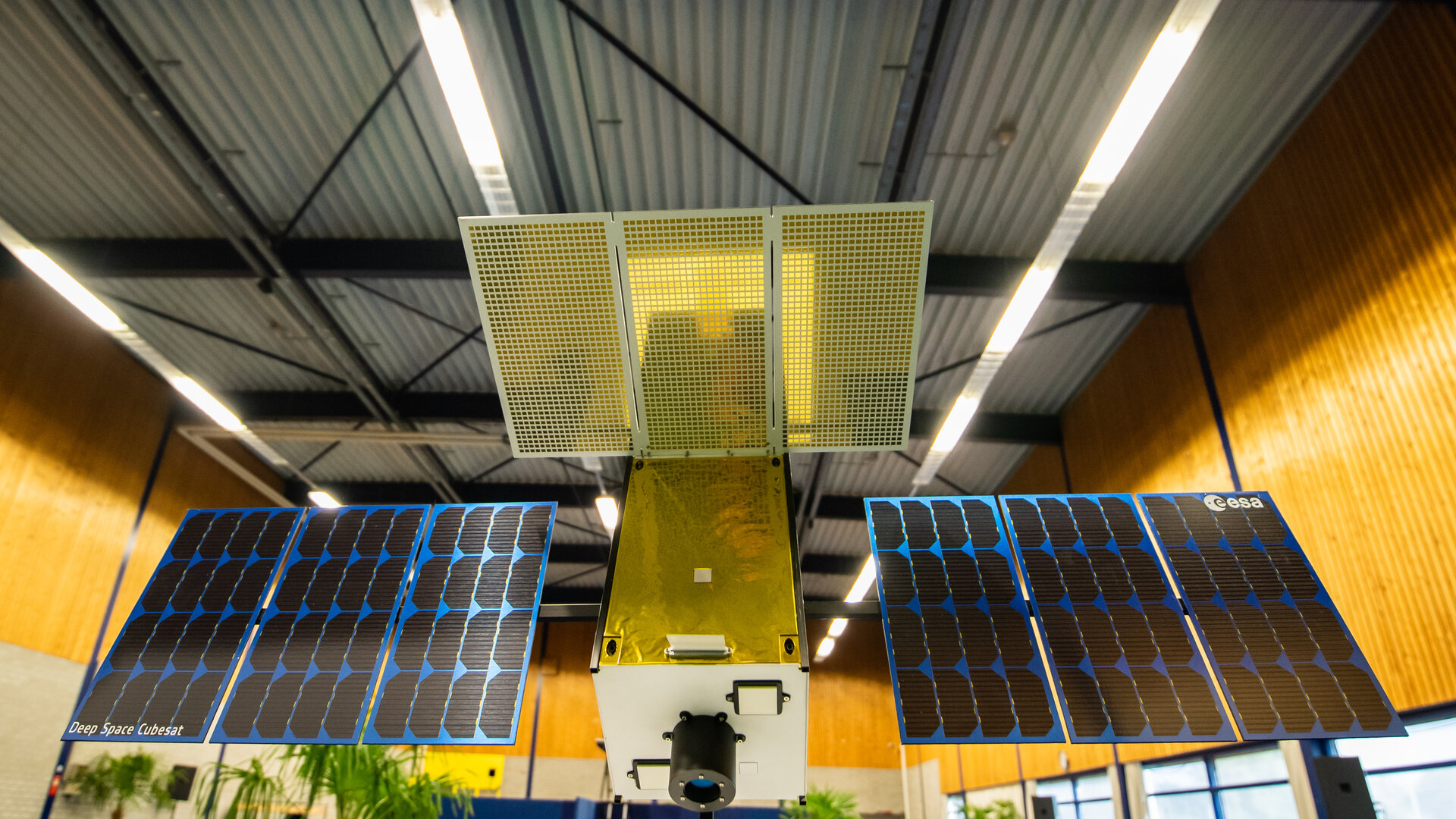 This replica model of ESA’s ‘Miniaturised Asteroid Remote Geophysical Observer’, or M-Argo, was on display at the Agency’s recent Antennas workshop. It is the one of numerous small missions planned as part of ESA’s Technology Strategy, being presented at this month’s Space19+ Council at Ministerial Level.

This is a suitcase-sized nanospacecraft based on the CubeSat design employing standardised 10 cm cubic units within which electronic boards can be stacked and subsystems attached. M-Argo is a 12-unit CubeSat – with a 22 x 22 x 34 cm body – that would hitch a ride on the launch of a larger space mission whose trajectory takes it beyond Earth orbit, such as astronomy missions to a Sun–Earth Lagrange point.

The CubeSat would then use its own miniaturised electric thruster to take it into deep space and rendezvous with an asteroid, which it would survey using a multispectral camera and a laser altimeter to look for resources  such as hydrated minerals that could be extracted in future. Other miniaturised payloads are also being considered.

“Such a small spacecraft has never independently travelled through deep space to rendezvous with an asteroid before,” comments Roger Walker, overseeing ESA’s Technology Cubesats. “It will enable the cost of asteroid exploration to be reduced by an order of magnitude or more.”

Numerous miniaturised technologies are currently being developed to enable the M-Argo mission, including the electric propulsion system, a high frequency ‘X-band’ communications system with a flat panel antenna – as seen in the image – to communicate with Earth at distances of up to 150 million km and a mechanism to steer the solar panels constantly at the Sun to generate enough power for the electric propulsion and communications systems.

The M-Argo CubeSat and its mission are currently being designed for ESA by a team consisting of Gomspace in Luxembourg and Politecnico di Milano in Italy.

“The team has identified a total of 148 near-Earth asteroids potentially reachable for a rendezvous using design,” adds Roger. “From these, five different asteroids have been carefully selected for further analysis in terms of optimising their rendezvous trajectories and close-up navigation - some of the closest to Earth in terms of the amount of fuel needed to get there: a key consideration for future mining of in-situ resources.

“M-Argo design has recently reached a milestone with the Mission Definition Review, which confirms that the CubeSat can rendezvous with any one of these five different asteroids, if launched during the 2023-2025 timeframe. The M-Argo team will now focus on completing the design concept of the CubeSat up until April next year. ”

“This is the first time ESA is designing a low-cost spacecraft for asteroid mining purposes in line with the Luxembourg space strategy. M-Argo and numerous other innovative technology-testing CubeSat missions, are being supported through the Fly element of the Agency’s General Support Technology Programme, part of ESA’s Technology Strategy being presented at Space19+.” says Kenza Benamar, Coordinator of the Fly element.

Also being presented at the Ministerial is the Hera asteroid mission, a larger-scale spacecraft that would deploy two CubeSats when it reaches its target binary asteroid system.