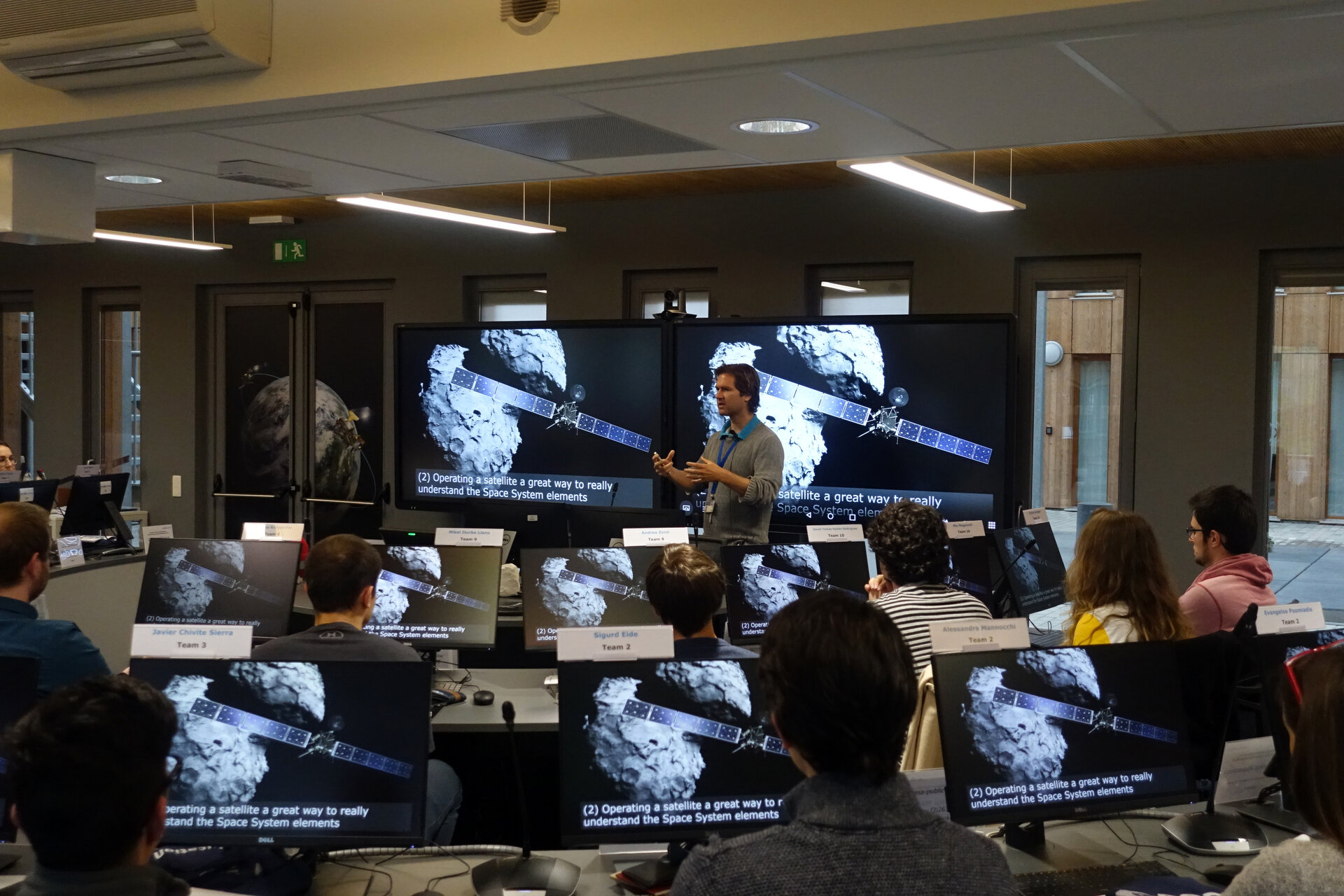 ESA’s Rosetta mission was an incredible feat of science and engineering. Studying a comet up close, and even landing a probe on its surface, was an apt demonstration of ESA’s abilities. Even though the mission ended in 2016, its benefits live on in the ESA Academy’s Rosetta Science Operations Scheduling Legacy Workshops. The 2019 workshop has just been completed by 30 university students from 12 different ESA Member States and Canada.

This second edition of the workshop was held from 2 to 5 April 2019 at ESA Academy’s Training and Learning Facility in ESEC-Galaxia, Belgium.. Present to share expertise with the students were seven experts, scientists and engineers, from ESA and the Max Planck Institute for Solar System Research. Among them were the Rosetta Project Scientist and Spacecraft Operations Manager.Personally involved with the Rosetta mission, the trainers had unrivalled knowledge and invaluable viewpoints, and they peppered the week with stories and anecdotes.

"The friendly and international environment, together with the knowledge acquired during these four days were the best parts of the workshop,” reviewed a Portuguese student from the Instituto Superior Técnico. “This workshop was one of the few opportunities that I have had, as a student, to meet international science operation experts with the same interests and motivations and a common goal, while learning from their shared experiences in a mission that every space technology student is very fond of. I also found important the fact that this expert-student flow of information did not happen only during the lectures, but also in less formal scenarios, such as over coffee breaks or dinner. The workshop exceeded all my expectations and I had no idea how much I could learn in just four days. What an amazing week!"

The students were excited to learn about science operations scheduling, and how it was planned for the Rosetta mission. A combination of lectures and exercises using the ESA’s Mission Analysis and Payload Planning Software (MAPPS) kept each day varied.

The students were divided into groups of three, each with a different background. They were supported by the experts that had scheduled the Rosetta mission. Various scenarios were proposed, such as Rosetta’s arrival at the comet, and the search for the Philae lander after it bounced on the comet’s surface. These situations provided context, and gave ample opportunity to both utilise the planning software, and draw upon the experience of the experts. In one scenario, students had to schedule the pictures that needed to be taken for Philae’s descent, and then scour the Rosetta archive to find and analyse them.

"During this week I embarked on a journey with Rosetta, alongside the people that dedicated their careers to see this mission succeed,” said a Portuguese student from the Delft University of Technology. “From arriving at the comet to its final descent, Rosetta unveiled the secrets of 67P, and produced invaluable science during its lifetime. Hopefully the students involved in the workshop will be the future scientists and engineers exploring our Solar System and beyond, following the footsteps of Rosetta!"

The accompanying lectures were designed to support and complement the exercises. They also allowed the students to gain insight into the many and varied aspects of the Rosetta mission. Some were broad, such as an overview of Rosetta; while others were more specific, such as planning the end of mission operations.

Throughout the week, each student group had the opportunity to present the results of an exercise to the rest of the participants. This allowed them in-depth discussions, which were evaluated so that the students could claim ECTS credit(s) on their return to their respective universities. In addition, the students enjoyed a guided tour of ESEC-Redu and the PROBA control and operations rooms, which proved to be particularly illuminating.

A Spanish student from the University Carlos III of Madrid found this to be a formative experience: “There was T.S. Eliot quote I read a long time ago, which goes ‘Only those who risk going too far can possibly find out how far one can go’. I have always tried to follow that ideal. The second edition of the Rosetta Science Operations Scheduling Legacy Workshop proved me that ESA not only follow that ideal, but also achieve it. I truly wish one day I will work at ESA.”