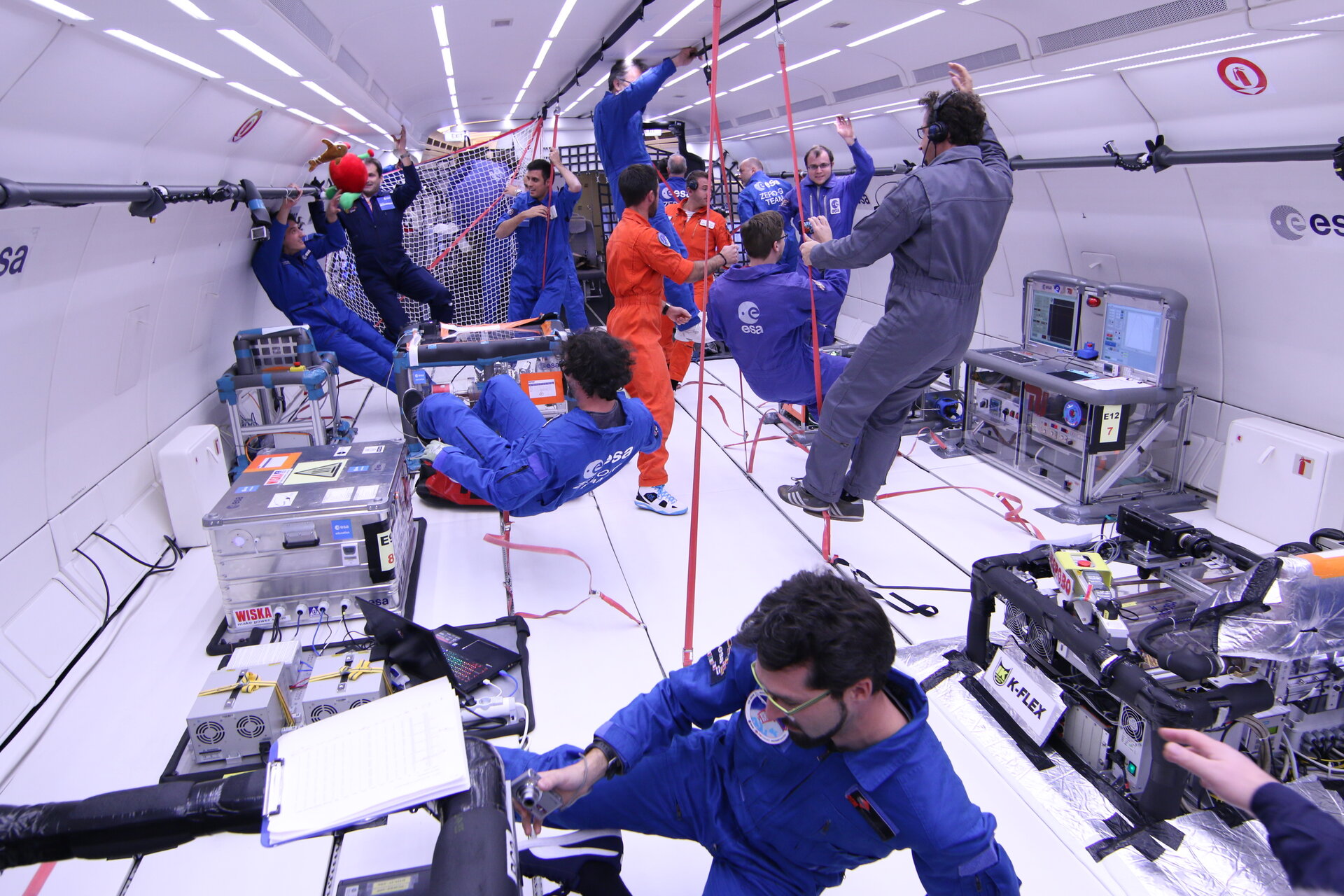 An extraordinary experience just concluded for four teams of university students. In the frame of the Fly Your Thesis! 2016 programme, they were selected to conduct experiments during the 65th ESA parabolic flight campaign. This gave the opportunity to the participating students not only to execute their experiments in weightlessness conditions, but also to get the direct experience to float in weightlessness, which otherwise – apart from parabolic flight campaigns – is a privilege practically reserved only to astronauts.

The four teams investigated different aspects of space science. TheTEPiM teamfrom the Universidad Politécnica de Madrid (UPM) in Spain studied the melting process of Phase Change Materials in weightlessness conditions. The CFVib team, also from UPM, investigated the behaviour of fluids subjected to high frequency low amplitude vibrations. The Italian team PoliTethers from Politecnico di Milano tested the control dynamics and algorithms for tether-based systems, in view of possible future applications to tow space debris to be deorbited, and the team from the Universität Duisburg-Essen in Germany, Anemoi4 examined the wind speeds needed to lift dust in an Martian-like atmosphere.

The teams were selected in December 2015 and spent about 8 months developing their experiment. During this period they were closely supervised by ESA Education, Novespace, and by an assigned mentor from the European Low Gravity Research Association (ELGRA).

Parabolic flights on board the Novespace Airbus 310 Zero-G

To offer weightlessness on board the Airbus Zero-G, the pilots have to fly the airplane in a special manoeuvre following the form of a parabola. This manoeuvre starts in a steady flight at 6km altitude.  The pilots then increase the thrust and gradually pull up the aircraft to a pitch angle of about 50°. This manoeuver lasts about 20 seconds and causes the local acceleration to increase to 1.8g (1.8 times the gravity level at the Earth’s surface). Once the maximum pitch angle is reached (altitude around 7.5km) the engine power is reduced to only compensate for air drag and the aircraft falls freely following a parabolic path with the highest altitude point at around 8.5km. During this free fall state, which lasts about 22s, experiments and experimenters on board the aircraft experience weightlessness just like astronauts on board the International Space Station. The manoeuvre is concluded with another 1.8g pull out phase eventually bringing the aircraft back to a steady horizontal flight. This is repeated 31 times per flight and the campaign consists of three flights.

To fly this special manoeuvre 3 pilots are controlling the aircraft at the same time. One pilot is responsible for the yaw movement, one for the pitch and one for the thrust.

The plane with only 40 seats and an overall length of 46.4 meters has nearly half of its total length (20 meters) dedicated to accommodate the experiments to be executed in weightlessness conditions. The floor and all walls are specially padded to prevent that experimenters get hurt during the transitions from weightlessness to 1.8g .

The Fly Your Thesis! programme

After selection in January 2016, the student teams worked hard and had to pass specific reviews and milestones. Designing experiments for weightlessness and to be operated on board the Zero-G aircraft is very different than just building to operate them in a lab.  On one hand it is very challenging to meet all safety requirements since the experiments are flown on board an aircraft, and are operated in weightlessness conditions. On the other hand, the experiments must be operated in a very limited amount of time, and their design must allow for this ease of operations.  All student experiments of FYT! 2016 were very successful throughout the campaign and the scientific data which was collected will keep the students busy for quite some time as they carefully evaluate of the results.  The results will then be disseminated in papers and at international conferences.

The TEPiM team developed an experiment, which studies Marangoni effect during the melting of Phase Change Materials (PCM) in weightlessness. This effect is very hard to study on Earth because convection would govern the phenomena occurring during phase transition. However, in weightlessness, convection is absent, and the team wanted to observe the influence of the Marangoni effect on the melting behaviour of the PCM.  Phase Change Materials can be used for thermal control of spacecraft but also have many application on Earth. Andrés Cobos, team leader of TEPiM said, “The sensation of the first ZERO g parabola will be remembered for the rest of our lives and more importantly, the experience of the whole project has been really enriching”. 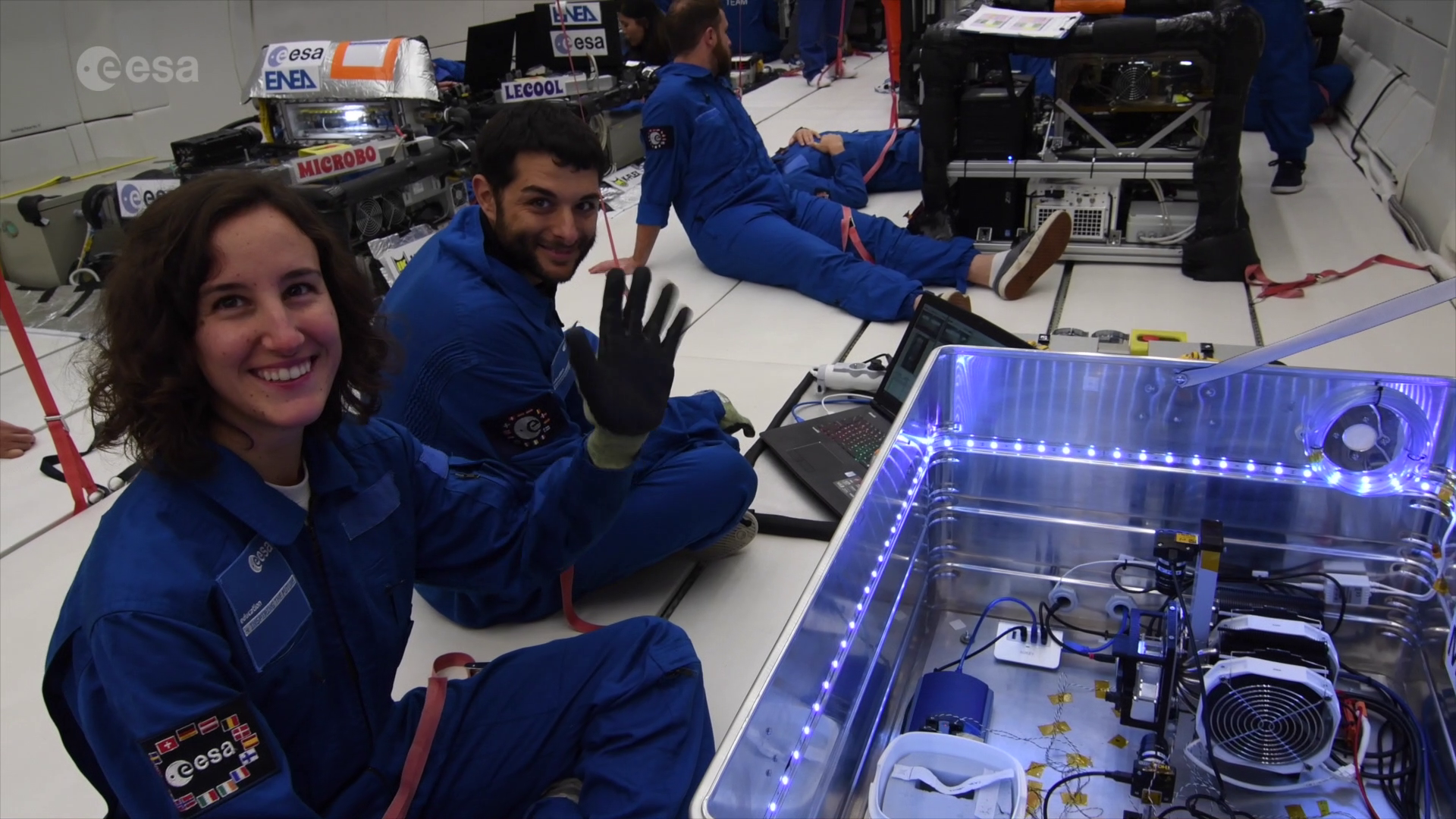 Control of Fluids with Vibrations

Fluids in weightlessness behave quite differently than under normal gravity conditions; for instance sloshing of fuel in spacecraft tanks is a great challenge yet to be resolved. The CFVib team looked at how they could control fluids in weightlessness using high frequency vibrations. A first look at their data shows some promising but also surprising results. “From the first parabola to the end one the microgravity and having our experiment in ZERO g were two of the most wonderful experience of our life. We are looking forward to see the science results!! “ said Jose Javier Fernandez, team leader of CFVib. 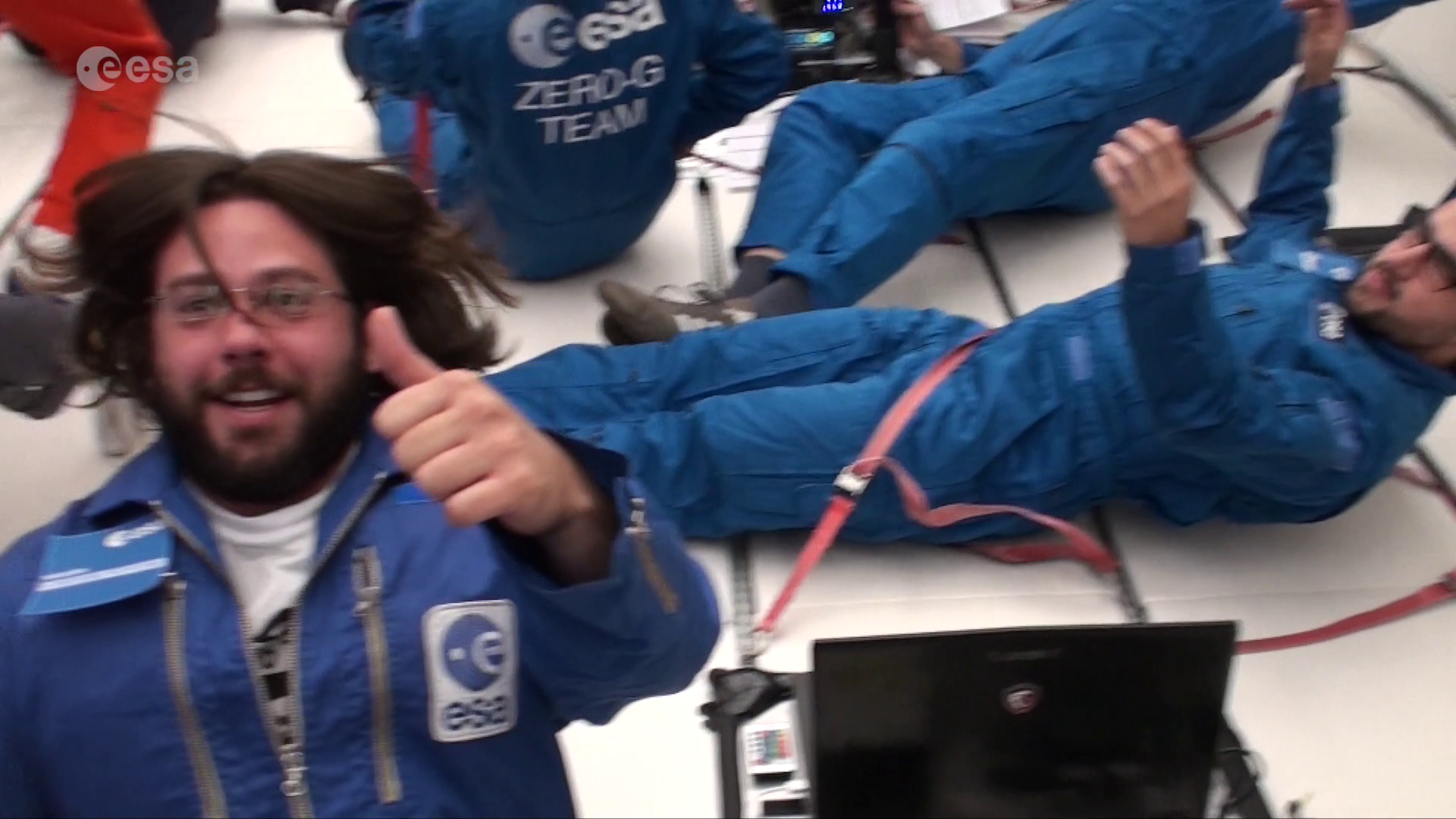 Just like ships and cars are towed if they broke down or are out of fuel, it might be possible that one-day satellites are towed for deorbiting purposes. The PoliTethers team therefore investigated how a tether strained between two satellites would behave in weightlessness, and what control strategies and algorithms for the tether would be most suitable to allow a “space tug” to execute “orbital towing” manoeuvres to deorbit other satellites.  The experiment showed very promising results at first sight, and now the arduous work of 3D data image analysis starts for the team. "The few hours spent in microgravity have largely paid off the efforts and hard work from the past months. It was in an amazing and unforgettable experience for the whole team from both personal and professional points of view. The experiment was a success: a huge amount of data was collected. Preliminary analysis show that the control system is effective and robust but they also highlighted a different tether behaviour with respect to ground tests. More analysis and publications will follow" said Riccardo Benvenuto, team leader of Politethers team. 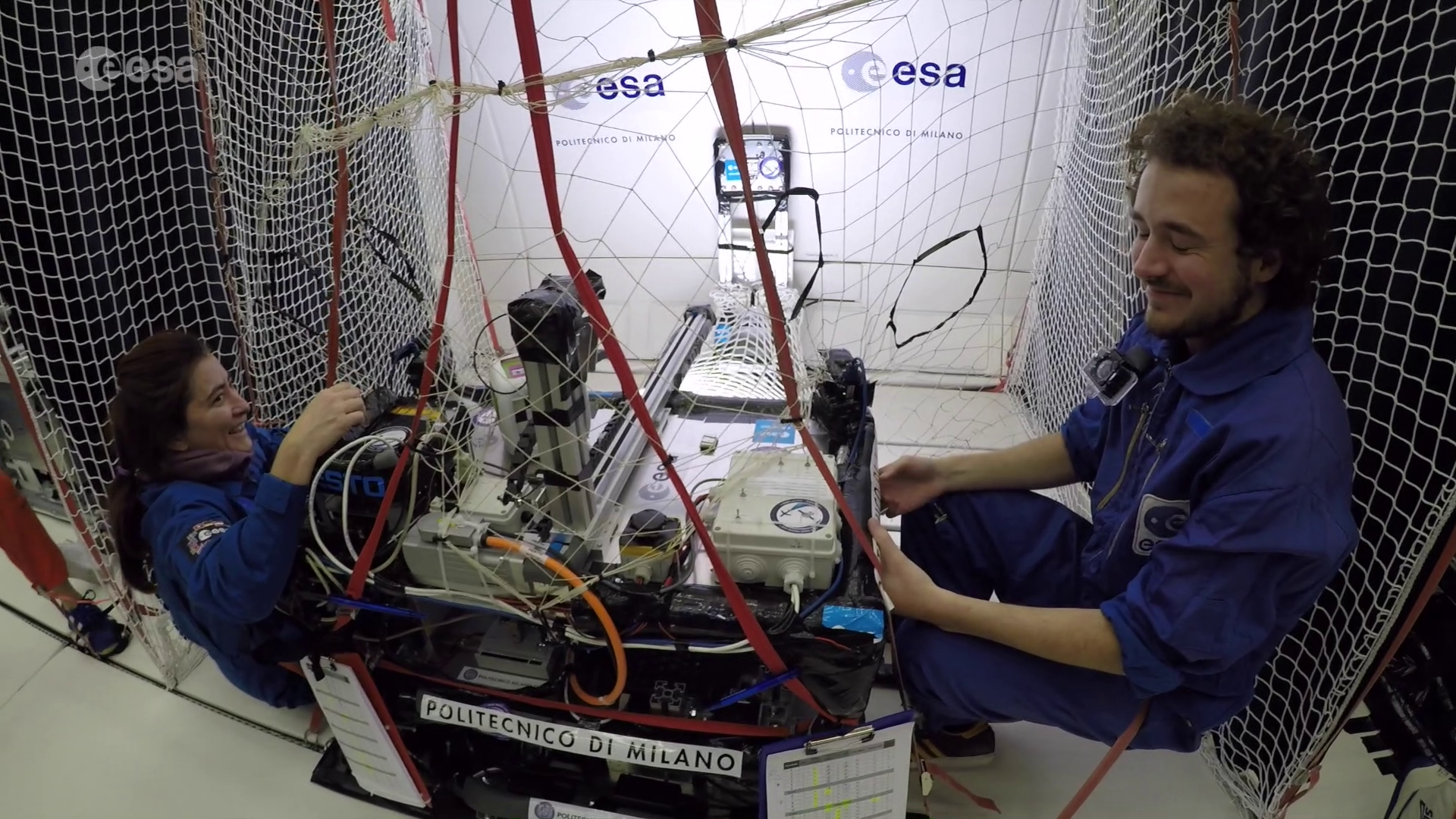 In the novel (and later movie) ‘The Martian’, a dust storm endangers on a human base on Mars. We know that there are dust storms on Mars, sometimes even covering a large proportion of the planet. However, our current models regarding dust lifting predict that the wind speeds and atmospheric pressure on Mars are not sufficient to lift dust off the ground. The Anemoi4 team hoped to be able to solve this contradiction with the results of their experiment, which worked flawlessly on board. The team is very pleased with their participation and their results. “Developing this experiment taught us so much and brought us so much further”  said a team member at the end of the campaign,  Maximilian Kruß from the Anemoi4 team explained, “Developing this experiment taught us so much. Besides the educational value, feeling weightless was a unique experience. We definitely wouldn't mind to fly again….” 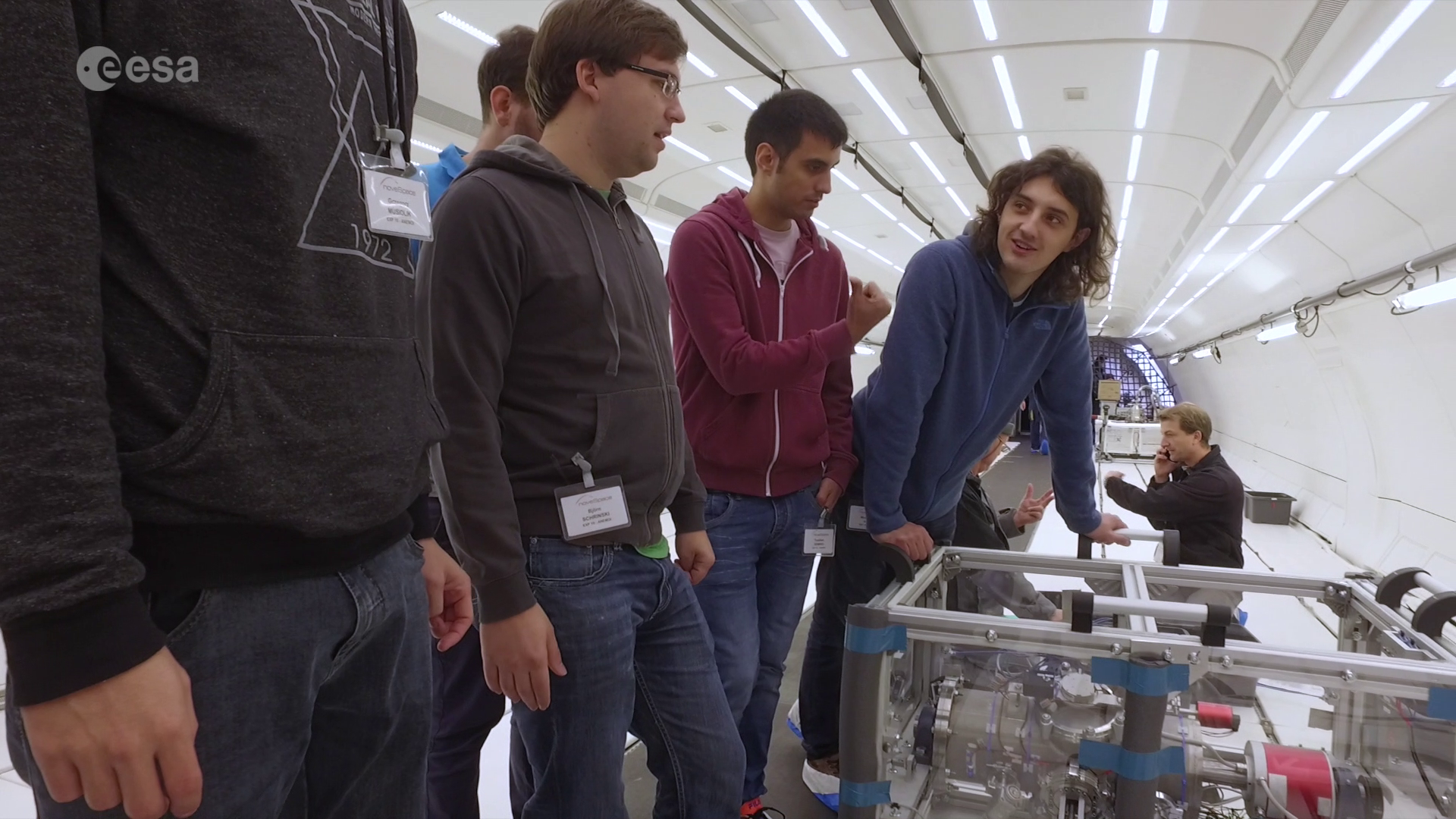 Fly Your Thesis! – a programme worth joining
Part of the ESA Academy’s Hands-On Space projects, Fly Your Thesis! is a recurring programme that ESA Education sponsors on a yearly basis. During the FYT! programme, students receive valuable feedback from ESA, Novespace, and European Low Gravity Research Association (ELGRA) experts; last but least, they get the extraordinary opportunity to execute their experiments in weightlessness conditions on-board a state-of-the-art vehicle like the Novespace Zero-G aircraft, beside experiments and teams of professional researchers. The programme enables participants to develop important practical skills through hands-on activities, as well as project management, thus developing a considerable direct experience in designing,  testing, and operating in laboratory and  weightlessness conditions their experiment hardware and software.

As a direct consequence of the research they conducted during past FYT! campaigns, many students have so far been able to present their results at international conferences and/or to publish papers in leading scientific journals. FYT! also provides opportunities to meet experts and work with them. The experience gained is an important addition to students’ curriculum vitae, and increases their chance of being elected for future professional opportunities.