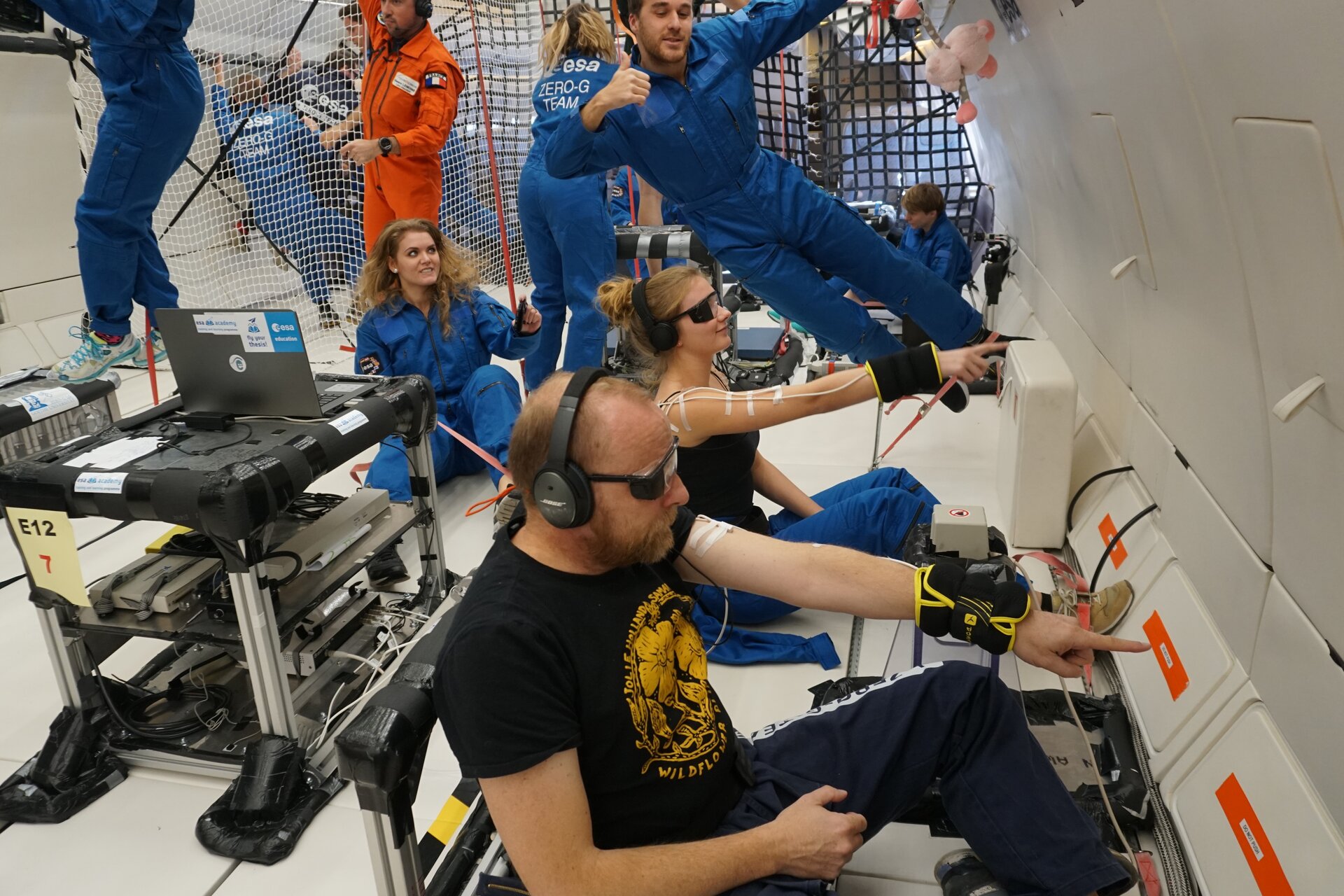 Aboard Novespace’s Zero-G Airbus A310 scientists have the unique opportunity to ‘fly’ their experiment in micro- and hypergravity conditions, generated by four intensively trained pilots who carefully control the aircraft into a parabolic trajectory. At about 6 km altitude, the pilots increase the thrust and gradually pull up the nose of the aircraft to reach an angle of approximately 50 degrees. For about 20 seconds, the local acceleration increases up to 1.8g and passengers in the cabin experience an extreme gravitational force. ‘It’s as if there’s glue underneath my shoes and my arms are pulled down with strings’ – passenger onboard of the Zero-G A310.

In order not to get ill in the hypergravity phase, passengers are instructed to keep their gaze straight and not move their eyes. However, some scientists are specifically interested in these hypergravity phases: In the back of the cabin, participants of a professional medical experiment team are jumping up and down on a small platform. By not moving their heads horizontally, the participants hope to prevent nausea.

When the maximum pitch angle is reached the engine power is reduced to only compensate for the air drag and the aircraft freely falls through the air, following a natural parabolic path. Similar to astronauts in the International Space Station, the passengers in the cabin experience weightlessness. ‘It’s amazing to see our experiments working in the aircraft and the whole sensation of weightlessness is a complete new experience for me.' said a member of G-REACH.

Contrary to astronauts who sometimes remain in space for several months, these passengers only get to experience the microgravity sensation for 22 seconds before re-entering a second hypergravity phase. To ensure that scientists retrieve enough data within this short time frame, the parabolic flight campaign contains three flights with 31 parabolic manoeuvres per flight, leading up to 93 parabolas in total.

Within an aircraft cabin hosting and powering many different and difficult experiments, ranging from medical and biological topics to fluid dynamics and technology demonstrations, the risks and hazards are high. Experiments chosen to fly on board of the aircraft therefore have to face the many requirements set by both Novespace and ESA and use creativity and ‘out-of-the-box thinking’ to prepare and built their set up in the most efficient and safe way. This also applied to the student teams selected by ESA Academy.

The four Dutch students from team G-Reach (MC Erasmus, NL) and the Spanish, Italian and two Swedish students from team PVT-Gamers (Luleå Technical University, SE) were selected by the Fly Your Thesis! Selection Board about a year ago. Since then, both teams worked on their projects during which they were guided by experts of Novespace and members of ESA Academy. A Gravity Related Training Week was organized in order to enhance the student’s knowledge on system engineering, project management, outreach and communication, and the students had to update both Novespace and ESA continuously on their developments throughout the year.

‘It is an amazing experience. You really get the full package, from the very beginning of designing your own project to project and financial management to analysing your results. Everything that you accurately plan beforehand will need extra work and time. But that’s exactly what distinguishes the Fly Your Thesis programme from ordinary thesis projects.’ said one student from PVT-Gamers.

During this campaign, team G-Reach hoped to uncover what sensory information is relied upon by the brain to detect errors and adapt movements. Each flight, two participants performed a fairly simple motor task, moving their arms up and down vertically while relying on proprioceptive and/or visual feedback. Team PVT-Gamers aimed to validate a new gauging method developed for accurately determining the remaining propellant mass in spacecraft tanks used for electric propulsion systems. By applying this new method to specially designed gas containers under micro- and hypergravity conditions, it could be possible to determine levels of propellant within the tanks. Even though both teams are only at the beginning of the analysis phase, it seems that both teams are on their way to produce some useful and interesting results.

The Fly Your Thesis! Selection Board selected two new teams for the FYT 2019 campaign: team Grain Power 3D Printing from Germany and team PHP3 from the UK. Keep up to date with their progress on our ESA Education twitter and facebook accounts!