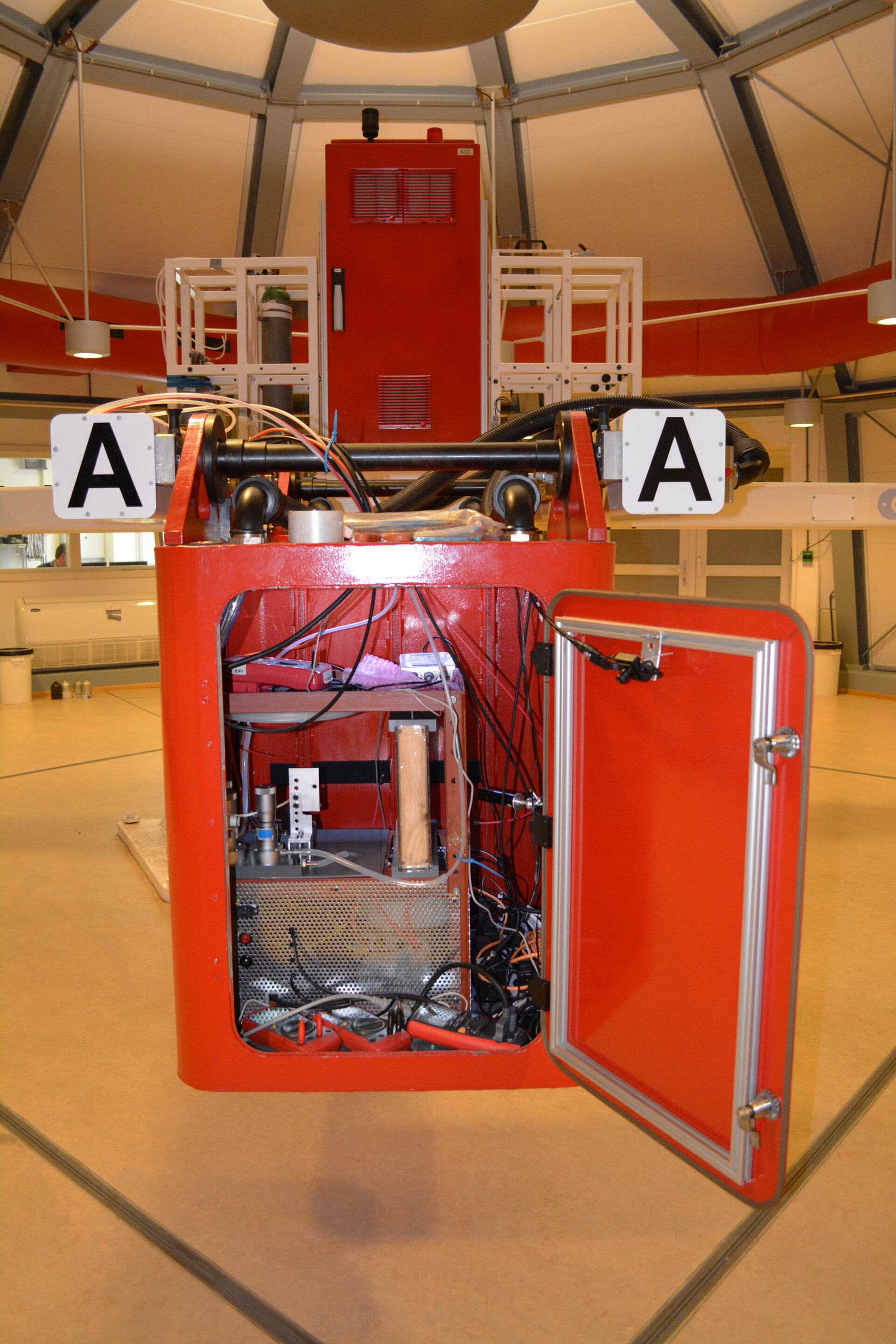 Investigations related to spaceflight safety, heat management in electronic equipment, regenerative medicine, and ‘floating’ water droplets have all been performed by university students during the ESA Education Office’s 2013 Spin Your Thesis! campaign.

For 10 days between 23 September and 4 October, four student teams got ‘into a spin’ – in a good way – at ESA’s Large Diameter Centrifuge at ESTEC, in The Netherlands. The centrifuge allowed them to run experiments at up to twenty times the natural pull of Earth’s gravity (20 g).

The campaign started with the arrival of the GRAVARC TNG team from Masaryk University in Brno (Czech Republic). Three Plasma Physics PhD students investigated the way an electrical discharge glides along between two electrodes. Studying such discharges at different levels of gravity is important not only for safety in electrical systems during spaceflight, but also for the design of spacecraft ion thrusters. Additionally, it helps towards understanding lightning in planetary atmospheres.

By lunchtime on the first day the team had their experiment all set up and checked by an electrical specialist to verify the safety of the high voltage necessary to produce the discharge spark. Each team was allotted 2.5 days and the runs went so well that the GRAVARC TNG students even had time to try out a recently developed Imaging Spectrometer that could give them even more data.

The second team was Hy-PHP, composed of a PhD student and a Masters student from the Engineering Department of the University of Bergamo (Italy). Arriving on Tuesday morning, they unpacked and checked the Pulsating Heat Pipe (PHP) they were planning to test.

This innovative piece of technology is an effective way of removing heat from sources like electronics or spacecraft. To use a PHP in spaceflight, however, will require it to work under a range of different accelerations, which can be simulated in the centrifuge. The team’s experiment began on Wednesday afternoon and went so well that by Friday, they pushed the centrifuge all the way to 20 g.

The second week of the campaign started with Osteo. The team consisted of two PhD students of Biorobotics from the Italian Institute of Technology and one undergraduate student of Bioengineering from the University of Pisa (Italy).

They had arrived on Friday evening to prepare the living cells needed for their experiment.  By Monday morning the cells were ready and were loaded in their incubator and into the centrifuge. For three hours at a time, the cells were kept at a specific temperature and subjected to the full 20g and then studied under the microscope. Their results could help design new approaches for drug delivery and regenerative medicine.

The final team investigated the Leidenfrost effect. This happens when a droplet of liquid touches a hot plate and levitates over a film of its own vapour, preventing contact with the hot surface. Studies into the Leidenfrost effect could lead to applications such as the frictionless movement of objects on hot surfaces or the fabrication of nanowires.

The Spin Leidenfrost team, two Physics PhD students from University of Liege (Belgium), used the centrifuge to investigate the role gravity plays in the effect. The experiment, which required a droplet to be placed on the hot surface, while the centrifuge was turning, proved a little tricky to set up but soon the results were flowing in.

Overall, the campaign was a success, with all four teams acquiring useful data to help their respective projects. Everyone was in good spirits and the cooperation between the teams, the LIS engineers, and the ESA Education Office was excellent. All the hard work paid off and each team went home with a feeling of accomplishment.

The Spin Your Thesis! programme will continue in 2014. The call for proposals is currently open.