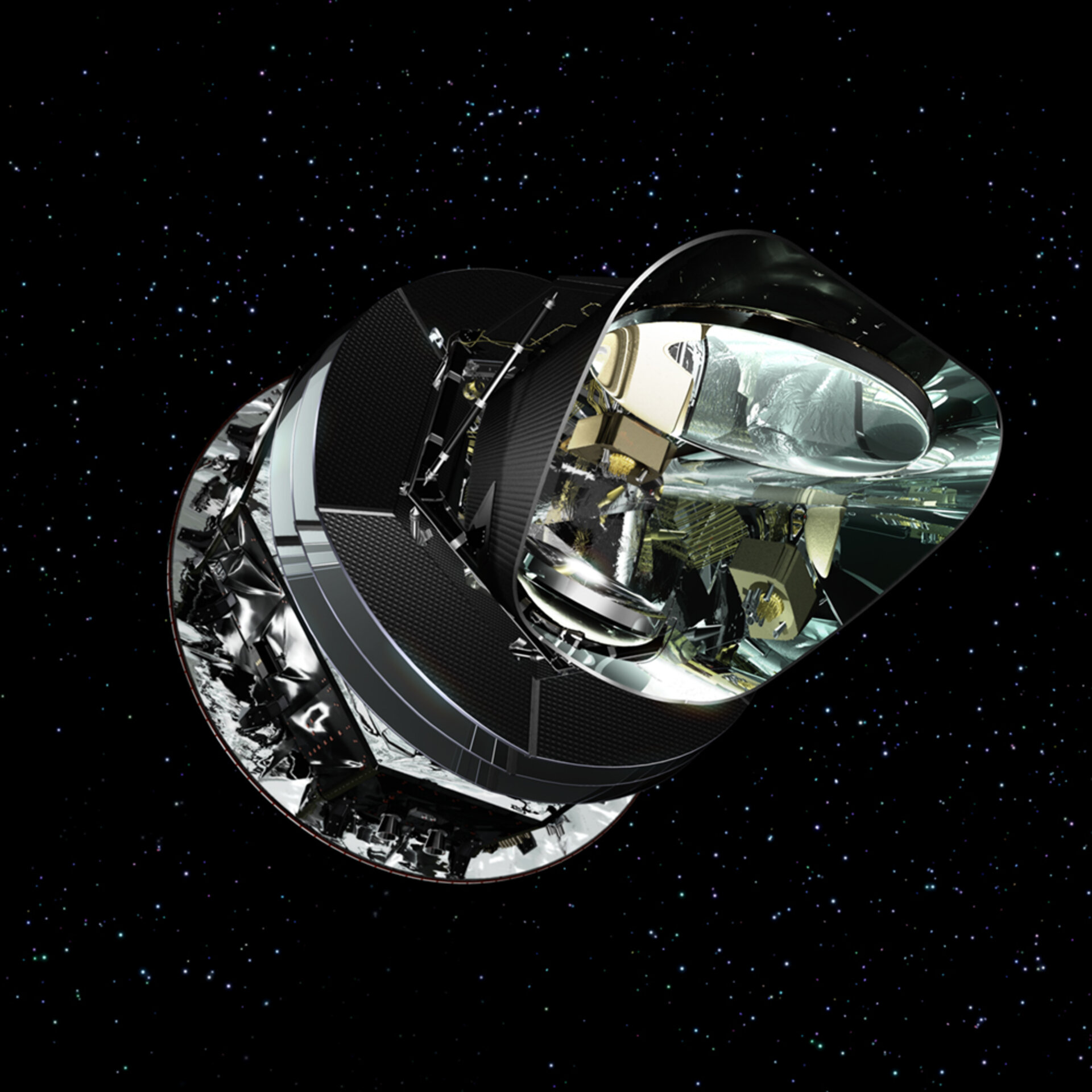 Planck was Europe's first mission to study the Cosmic Microwave Background, the relic radiation from the Big Bang, which occurred about 14 thousand million years ago.

As the early universe expanded, it cooled, and at a time called 'recombination', it had cooled sufficiently for electrons and nuclei to form atoms. At this time the light that had been bouncing about within the plasma became free to travel through space (as if the universe had switched from being opaque to transparent). This freed light was initially energetic, but with the continued expansion of the universe, what was once a searing fireball of radiation has since cooled to become a background sea of microwaves.

Planck measured the temperature variations across this microwave background with much better sensitivity, angular resolution and frequency range than any previous satellite, giving astronomers an unprecedented view of our Universe when it was extremely young, just 300 000 years old.

Planck was 4.2 m high and had a maximum diameter of 4.2 m; the launch mass was approximately 1900 kg. The spacecraft was lofted into space in a double launch, together with ESA's Herschel space telescope, on board an Ariane 5 EC launcher on 14 May 2009. After completing seven sky surveys, and upon exhaustion of its helium coolant, it was switched off on 23 October 2013.

The Flight Control Team operated from a Dedicated Control Room located at ESOC. The team was initially led by Spacecraft Operations Manager Chris Watson, who worked closely with his colleague Micha Schmidt, the SOM for Herschel. He was later replaced by Steve Foley, who oversaw the end of the mission.

Beginning in 2007, Chris was responsible for gathering the Flight Control Team (FCT) at ESOC and oversaw their training and preparation for launch. The team shared expertise with the Herschel FCT, as the two missions are closely inter-related for launch and operations.

Like all missions controlled from ESOC, the Planck FCT relied on a wide range of experts from other ESOC teams to ensure operations success, including Flight Dynamics, Ground Facilities, Navigation and Mission Data Systems.

Together with Herschel, Planck was carried into space from ESA's Spaceport at the Guiana Space Centre, Kourou, French Guiana, on 14 May 2009, 13:12 CEST, by an Ariane 5 EC launcher.

The two vehicles separated some 26 minutes after launch, Herschel first, and then proceeded independently on different trajectories to the second Lagrange point of the Earth-Sun system (L2).

Prior to Planck's separation, the 'Sylda' support module burned several small thrusters, which were just sufficient to start Planck rotating at 1 rpm, which motion will continue during the satellite's operational life.

The Ariane-5 launcher burned its solid boosters for slightly less than 2½ minutes and its main and upper stage engines for about 25 minutes to inject Herschel and then Planck into transfer trajectories bound for L2.

On 3 July 2009, Planck was injected into a Lissajous orbit around the L2 point at a distance of around 1.5 million km from Earth. During the journey, Planck performed a number of manoeuvres:

At L2, Planck performed a major manoeuvre to enter a small Lissajous orbit about the Lagrange point, with the Sun-spacecraft-Earth angle limited to fifteen degrees.

Lissajous orbits are the natural motion of a satellite around a collinear libration point in a two-body system and require less momentum change to be expended for station keeping than halo orbits, where the satellite follows a simple circular or elliptical path about the libration point.

Orbits about L2 are dynamically unstable; small departures from equilibrium grow exponentially with a time constant of about 23 days. Like Herschel, Planck used its propulsion system to perform periodic orbit maintenance manoeuvres.

While complex, this orbit provided an ideal environment for a space observatory: far from the Earth and its magnetic field (that traps the solar wind) and with both the Sun and Earth orientated away from the sensitive payload-side of the spacecraft, which must be kept very cold. Emitted or reflected light from either the Earth or the Sun can damage sensitive instruments or disturb the cold environment necessary for them to function correctly.

Since January 2012, the spacecraft conducted three more sky surveys with LFI, enabling scientists to refine their CMB data. All science operations finally came to an end on 3 October 2013, and the payload was switched off on 19 October 2013.

After being fully passivated, the spacecraft was switched permanently off on 23 October 2013.

ESA's New Norcia station, DSA 1 (Deep Space Antenna 1), hosts a 35-metre deep-space antenna with transmission and reception in both S- and X-band and is located 140 km north of Perth, Western Australia, close to the town of New Norcia.

The ESA ground stations at Kourou and Maspalomas and Cebreros, Spain, also provided communications support during the Launch and Early Operations Phase (LEOP). In this period, operations ran in real time, nearly 24 hr/day. During the commissioning phase, Kourou and New Norcia provided coverage 10 hr/day (shared between Planck and Herschel).

For Planck, the Earth-to-spacecraft distance varied between approximately 1.2 to 1.8 million km.

It enabled scientific survey operations including planning and monitoring, instrument commanding and operations, downlink and distribution of spacecraft and science telemetry, processing of scientific data, and generation and delivery of final data and products to the scientific community.

As the hub of the ground segment, the MOC conducted mission operations, including planning, execution and data return, and served as the interface between the spacecraft and the the scientific community.

Planck's routine phase was planned to last approximately 15 months, or the time to make two full-sky surveys (overall mission life will be limited to the life of the on-board cryogenic cooling system).

In this phase, the instruments operated continuously during each sky survey. The exact path that was followed by the spin axis (which is always kept approximately pointed at the Sun) was decided in principle before the beginning of each survey, and updated as required on a roughly fortnightly basis.

Orbit maintenance operations were required at roughly monthly intervals. They did not require interruption of instrument operation.

Even though it was operated as an independent mission, Planck benefited from many commonalities with Herschel. The off-line nature of the operations allowed a common approach to spacecraft control and the interface with the science ground segments. The major difference between the two systems, from an operations point of view, was in the mission planning process and the supporting flight dynamics services.

The Planck spacecraft comprised a service module, which housed systems for power generation and conditioning, attitude control, data handling and communications, together with the warm parts of the scientific instruments, and a payload module. The payload module consisted of the telescope, the optical bench, with the parts of the instruments that need to be cooled - the sensitive detector units - and the cooling systems.

Planck spun at 1 revolution per minute, with its spin axis oriented to the Sun. Its telescope was offset from the spin axis, which therefore swept out a large circle on the sky, which continuously moved as the Earth (and Planck) travelled around the Sun.

The baffle and V-grooves were also used to effectively radiate to cold space some of the heat present on the payload module. This passive cooling was used to achieve a cold and stable background environment of about -223ºC (or 50ºK). The instrument coolers used this as a starting point for their further refrigeration of the payload.