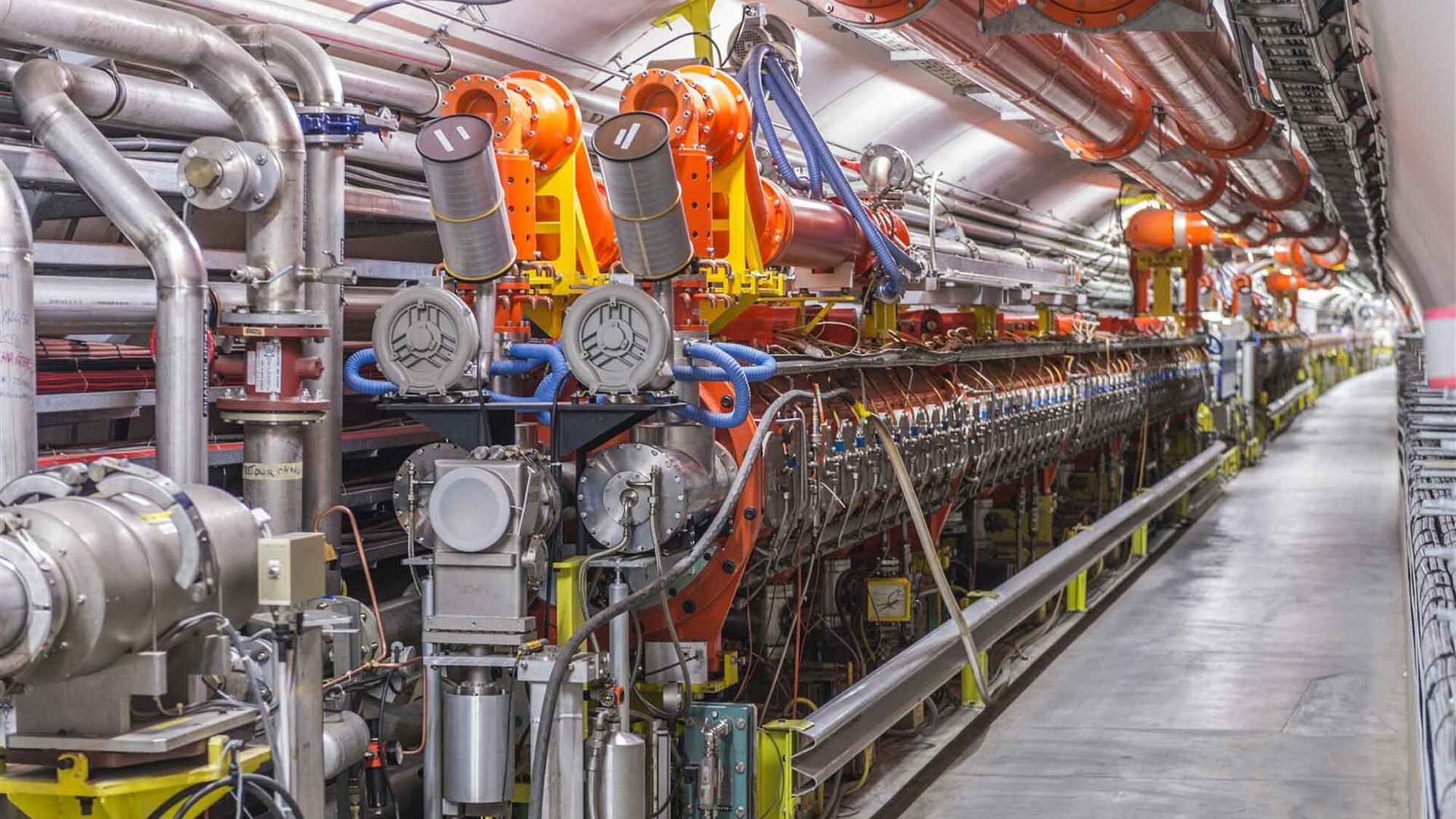 An ESA-led group subjected components and space equipment to the most intense beam of ultra-high energy heavy ions available – short of travelling into space – during a week-long visit to CERN, the European Organization for Nuclear Research.

Test items were placed in a path of an experimental beamline fed by the Super Proton Synchrotron (SPS) particle accelerator. Located in a circular tunnel nearly 7 km in circumference, the SPS is CERN’s second largest accelerator after the Large Hadron Collider (LHC), which the SPS feeds into in turn.

ESA was invited to make use of the Geneva-based centre’s beamline as part of an ESA–CERN cooperation agreement signed by their respective Director Generals.

The team donned hard hats and ventured into a ground floor ‘cave’ surrounded by protective concrete blocks to place items in the beam path, retreating upstairs before the beam was fired.

“It was a very exciting experience – we were exploring,” said Véronique Ferlet-Cavrois, heading ESA’s Power Systems, EMC and Space Environments division. “This ion beam is equivalent to the ultra-high energy part of the galactic cosmic ray spectrum – above 10 GeV/nucleon – whose effects have never been experimentally measured on the ground before.”

Space is a vacuum, but it is far from empty. It is awash in charged particles, including protons from the Sun as well as cosmic rays from the wider Universe, highly charged nuclei originating from violent cosmic regions such as exploding stars or black holes, then accelerated by magnetic fields during their galactic journeys.

The challenge for ESA electronics and space environment specialists is to ensure that components needed for space missions can go on performing in these high-radiation conditions.

Microprocessors, for instance, are growing ever more powerful as the number of transistors placed on a single chip doubles every two years or less – the famous ‘Moore’s Law’ – but this leaves them ever more vulnerable to ‘single event events’ as the transit of charged particles flip memory bits, or even trigger destructive short circuit ‘latch-ups’.

“CERN has to deal with comparable issues,” adds Véronique. “The particle collisions they trigger to study the nature of matter can emit radiation which may affect the detectors, electromagnets and other electronics around their accelerators.

“For instance, in 2007 CERN created their R2E task force – Radiation to Electronics – evaluating the risk of failures due to radiation in the control electronics of the LHC. So we have a long history of collaboration, long before our formal cooperation agreement was signed in 2014.”

ESA maintains a network of external facilities equipped with particle accelerators, such as the Louvain Cyclotron Resource Centre in Belgium, the Accelerator Laboratory at the University of Jyväskylä, Finland, and Paul Scherrer Institute in Switzerland, but these offer access only to the lower energy segments of the cosmic ray spectrum.

“Our external facilities are suitable and used largely for testing individual components, but we typically have to remove them from their packaging so that heavy ions can reach them,” comments Véronique. “Testing at CERN, the beam was energetic enough to easily penetrate packaging, a fact which also allowed us to test entire items of equipment.”

Also under test was a Standard Radiation Environment Monitor (SREM), a highly-sensitive radiation detector already flown on multiple ESA missions. The results should enhance calibration of the SREMs in space.

The ESA team was accompanied to CERN during the last week of November by representatives of a number of companies and institutions partnering with the Agency on various projects: Germany’s Fraunhofer Institute for Technological Trend Analysis, France’s iRoC Technologies, Poltecnico di Torino, the National Technical University of Athens and French space agency CNES.

“We will now study our results and use them to fine-tune our simulations,” concludes Véronique. “We will have a second CERN test campaign this time next year, while also planning to employ the similarly high-energy GSI-FAIR facility in Darmstadt, Germany.”