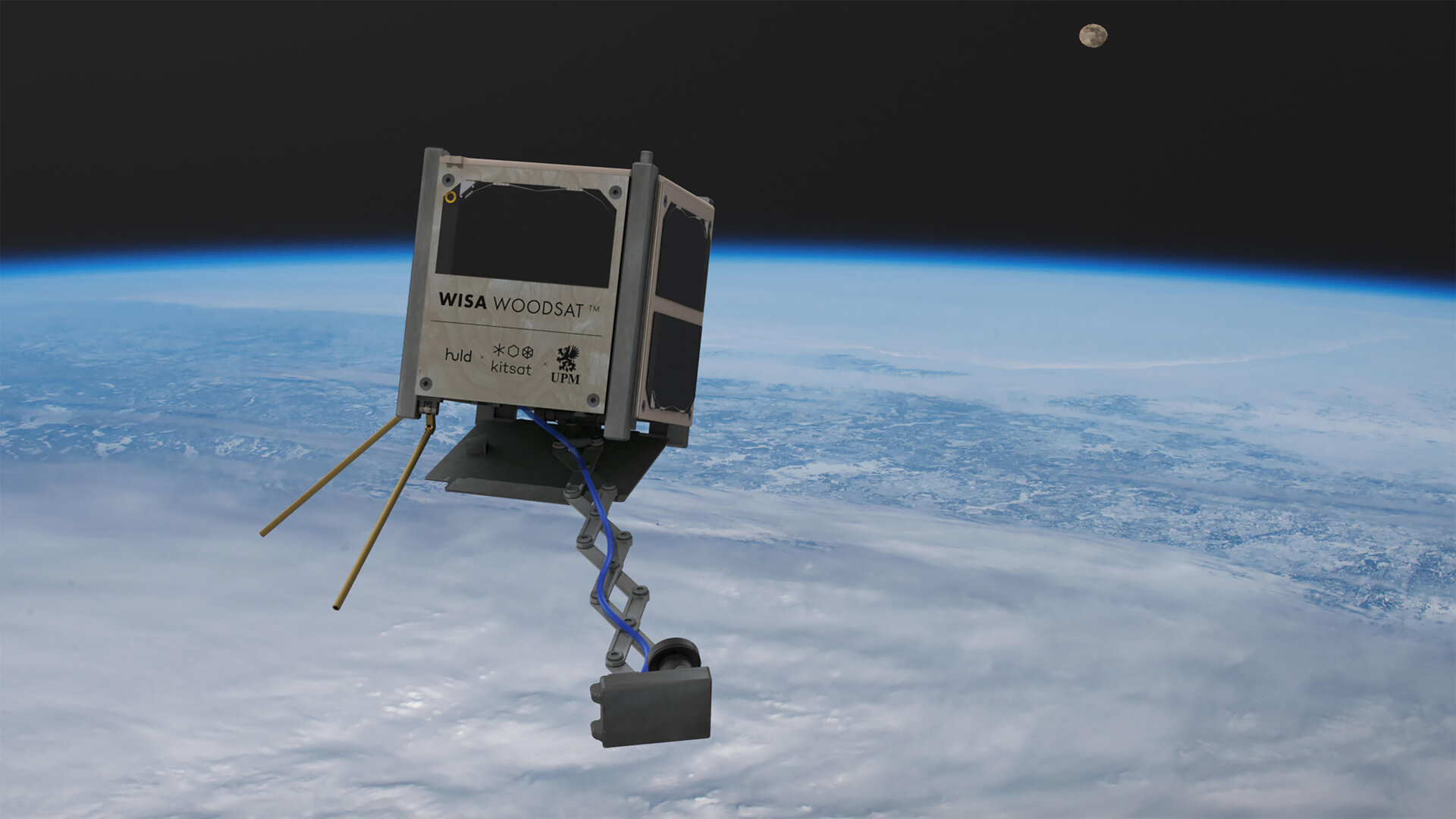 The world’s first wooden satellite is on the way, in the shape of the Finnish WISA Woodsat. ESA materials experts are contributing a suite of experimental sensors to the mission as well as helping with pre-flight testing.

WISA Woodsat is a 10x10x10 cm ‘CubeSat’ – a type of nanosatellite built up from standardised boxes – but with surface panels made from plywood. Woodsat’s only non-wooden external parts are corner aluminium rails used for its deployment into space plus a metal selfie stick.

The mission was initiated by Jari Makinen, Finnish writer and broadcaster. He co-founded a company called Arctic Astronautics, which markets fully functional replicas of orbit-ready CubeSats for education, training and hobby purposes. “I’ve always enjoyed making model planes, involving a lot of wooden parts. Having worked in the space education field, this got me wondering; why don’t we fly any wooden materials in space?

“So I had the idea first of all to fly a wooden satellite up to the stratosphere, aboard a weather balloon. That happened in 2017, with a wooden version of KitSat. That having gone well, we decided to upgrade it and actually go into orbit. From there the project just snowballed: we found commercial backing, and secured a berth on an Electron launcher from Rocket Lab in New Zealand.”

Riccardo Rampini, heading ESA’s Materials' Physics and Chemistry section, comments: “It’s been a tight schedule but we welcomed the opportunity to contribute to Woodsat’s payload in return for helping assess its suitability for flight.

“The first item we’re embarking is a pressure sensor, which will allow us to identify the local pressure in onboard cavities in the hours and days after launch into orbit. This is an important factor for the turn-on of high power systems and radio-frequency antennas, because small amounts of molecules in the cavity can potentially cause them harm.

“This sensor is being built for us by Sens4 in Denmark, who have done a great job to strip down their standard design to fit limited onboard volume and power constraints.”

ESA materials engineer Bruno Bras adds: “The good thing here is we have ended up devising a low-cost device that could find all kinds of further uses, both in orbit and down on the ground in test environments.”

Next to it will be a straightforward LED with a photoresistor that senses as it lights up. But the LED’s power will come through a 3D-printed electrically-conductive plastic called ‘polyether ether ketone’, or PEEK for short, opening up the prospect of printing power or even data links directly within the bodies of future space missions.

ESA materials engineer Orcun Ergincan comments: “The other item is a quartz crystal microbalance, serving as a highly sensitive contamination monitoring tool, measuring any faint deposits in the nanogram range coming from onboard electronics as well as the wooden surfaces themselves. This has been contributed by OpenQCM in Italy. This company is also building the overall printed circuit board stack hosting all three demonstrators with incorporated sensors.”

Sponsors for Woodsat include UPM Plywood in Finland, among the largest plywood makers in the world.

“The base material for plywood is birch, and we’re using basically just the same as you’d find in a hardware store or to make furniture,” explains Woodsat chief engineer and Arctic Astronatics co-founder Samuli Nyman.

“The main difference is that ordinary plywood is too humid for space uses, so we place our wood in a thermal vacuum chamber to dry it out. Then we also perform atomic layer deposition, adding a very thin aluminium oxide layer – typically used to encapsulate electronics. This should minimise any unwanted vapours from the wood, known as ‘outgassing’ in the space field, while also protecting against the erosive effects of atomic oxygen. We’ll also be testing other varnishes and lacquers on some sections of the wood.”

This highly reactive oxygen variant is found at the fringes of the atmosphere – the result of standard oxygen molecules being broken apart by powerful ultraviolet radiation from the Sun – and was first discovered when it ate away thermal blankets on early Space Shuttle flights.

Pre-flight testing suggests the satellite, which will orbit at around 500-600 km altitude in a roughly polar Sun-synchronous orbit, should survive its atomic oxygen exposure. But the wood is expected to be darkened by the ultraviolet radiation of unfiltered sunlight.

“We have a pair of onboard cameras, with one extended on a selfie stick to look back at the plywood and take pictures to see how it is behaving,” adds Jari. “We want to see colour changes, any cracking and so on.”

Designing and manufacturing of the camera boom proved an interesting exercise: the structure needs to be small as it can be within the tiny satellite for launch, then extend out as far as possible when in space.

"The design was made by Finnish engineering company Huld, pushing 3D printing to its limits,” adds Jari. “For Huld the Woodsat project has already proved an important reference point for entering other space mechanics projects, too."

As well as the cameras and ESA-donated sensor suite, Woodsat will also carry an amateur radio payload allowing amateurs to relay radio signals and images around the globe. To downlink data from this ‘LoRa’ radio link involves buying a ‘ground station’ costing as little as €10.

“In the end, Woodsat is simply a beautiful object in terms of traditional Nordic design and simplicity, it should be very interesting to see it in orbit,” continues Jari. “Our hope is it helps inspire people to take increased interest in satellites and the space sector as something that already touches all our lives, and is only going to get bigger in future.”

Woodsat is due to launch before the end of this year.