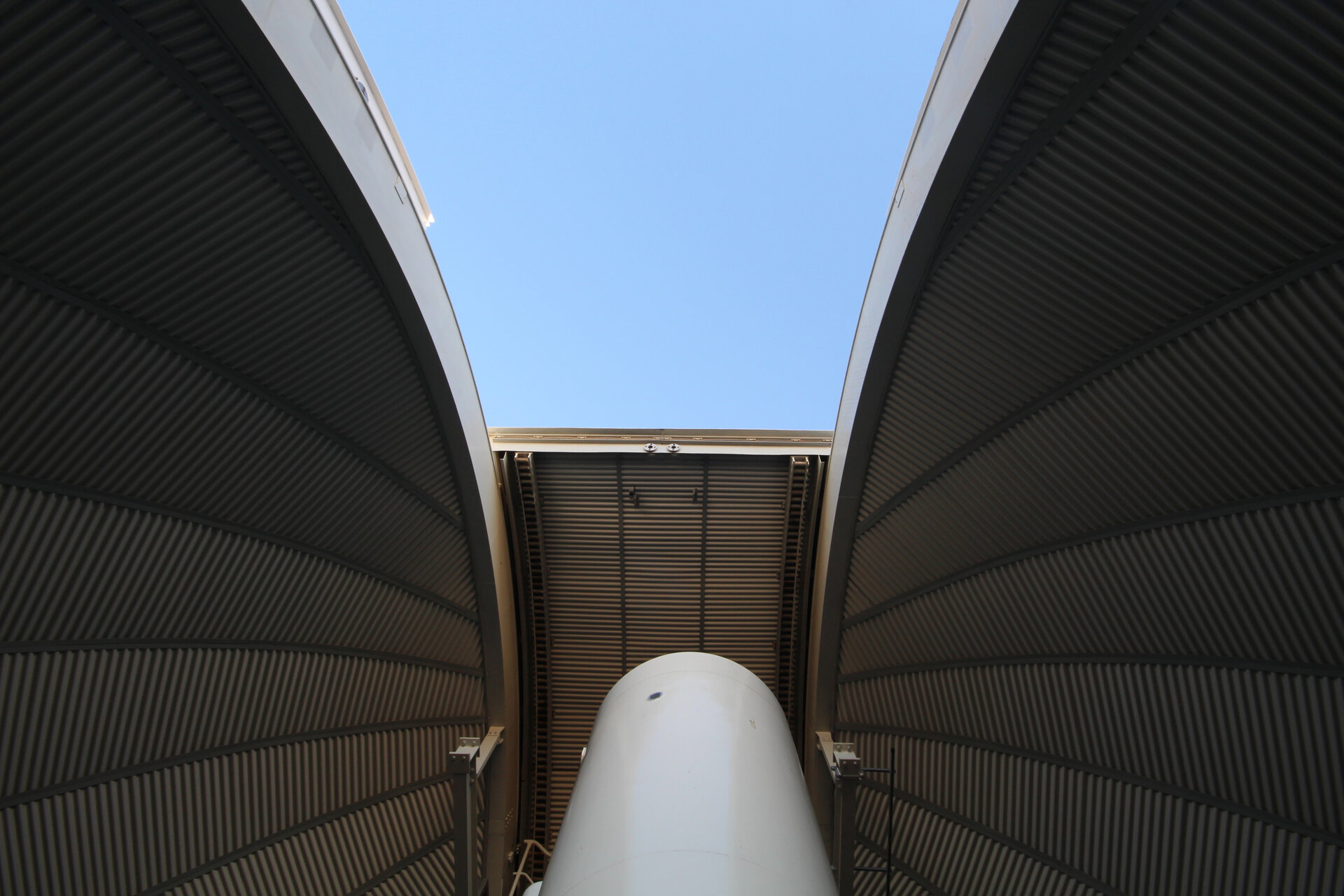 Amid the COVID-19 pandemic, ESA has resumed its watch on the skies around our planet. The Agency’s Optical Ground Station observatory, 2 400 m above the shores of Tenerife, tracks orbital space debris and near-Earth asteroids.

The Optical Ground Station (OGS) is located high on the slopes of the volcanic island, to take advantage of Tenerife’s clear weather conditions. It was originally built for laser-based optical communications with satellites, but for more than 20 years has also been performing monthly optical surveys of both human-made and natural objects beyond Earth.

“The Instituto de Astrofísica de Canarias, IAC, with responsibility for the site, followed advice from the authorities and shut off access in recent weeks, but the OGS has now reopened,” comments ESA optical engineer Clemens Heese, overseeing the OGS.

“We must still limit access to two people maximum at the OGS at any one time – but fortunately the cryogenically-cooled 1-m telescope used for our debris and asteroid surveys can operate with only a single observer.”

Both surveys are focused on very small and dim objects, so monthly observations focus on the nights around new Moon. Around 10 nights a month are devoted to observing debris and four nights for asteroids. “We are resuming our OGS-based survey of near-Earth objects,” confirms ESA planetary scientist Detlef Koschny, co-manager of the Agency’s Planetary Defence Office.

“This work is important so as to not lose track of objects which have been discovered initially by the US-funded asteroid surveys.”

“We are very happy that our debris survey can continue,” says Tim Flohrer, of ESA’s Space Debris Office. “While radar can watch over low-Earth orbit, up to about 2000 km, above that altitude optical imaging becomes essential to keep track of higher debris populations, all the way up to geosynchronous orbit, around 36 000 km up. We can resolve individual objects down to about 10 cm in size.

“The debris environment is a dynamic one, so prolonged gaps in observation could lead us to lose track of individual items. And our survey is among the longest – if not the longest – devoted to debris, dating back to the late 1990s.”

Ataman Science is the local firm contracted to operate the OGS. “We live about half an hour from the OGS, so access is easy up the mountain road,” says manager Jyri Kuusela. “The telescope’s field of view is a bit bigger than the full Moon, which is quite large compared to many telescopes, helping us to scan the whole of the sky.

“The basic technique is the same for observing both asteroids and debris. We make repeated acquisitions of the same patch of sky, looking for any objects that have moved in the interim. The difference is that orbital debris is moving much more rapidly, so our repeat observations take place every two hours or so, rather than days apart. Fortunately the OGS is highly automated, so this is easy enough to accomplish, even for a single observer.

“At the end of the night we send our pre-processed debris data to the Astronomical Institute of the University of Berne, in Switzerland, who prepare the next night’s observation plan based on their processing and calculations.”

The Institute’s Prof. Thomas Schildknecht explains: “We check the observed objects against our catalogue, to see if we can identify them or else log them as new items. We may also schedule follow-up observations using our own Swiss Optical Ground Station and Geodynamics Observatory Zimmerwald, aiming to get an idea of their physical characteristics: their brightness, colour and shape. We can also perform precision laser ranging.

“There’s a lot going on up there. The regions we’re looking at takes in geostationary transfer orbit, which is the way satellites rise up from low-Earth orbit to their final working orbit, medium-Earth orbit which takes in navigation satellite constellations, and then geostationary orbit and the graveyard orbit approximately 100 to 300 km above.

“We see new debris due to fragmentation events, where satellites are blown apart – probably due to leftover fuel. Other debris might be due to ageing effects, as satellites shed material, or spinning-up driven by the steady push of sunlight, known as solar radiation pressure.

“As with everyone, the current restrictions make working more difficult, but we’re able to carry on through remote access, and our observatory open also, albeit with limited staffing.”

The near-Earth object observations are analysed by observers from ESA, but also by experienced amateur astronomers helping the ESA team. The work of these amateurs is a valuable contribution – and can also be done from their home computer.

Debris results are fed into the ESA Space Debris Office’s long-standing Database and Information System Characterising Objects in Space, DISCOS, and the Agency’s Meteoroid and Space Debris Terrestrial Environment Reference, MASTER model, as well as shared with other research institutions on an open source basis. Near Earth object results are made available through ESA’s Near-Earth Object Coordination Centre, part of the Agency’s Planetary Defence Office, located in Frascati, Italy.